Movie, man does body swap. Young daughter knows he is not Daddy

Recently watched the movie Self/less, and it reminded me of another movie I had seen. (USA made, not sure how old, probably since 2000.)

In it a man has swapped bodies with someone. (I don't know the method, it could be like Quantum Leap, or alternate reality, or time travel, wish fulfilment. [I wish I had his life]) [I get strong vibes of a movie like Mr. Destiny (1990)]

The man is able to pass with all his friends and family as the original, with the exception of his young daughter (5-6 years old.)

The first time she sees him she runs to him saying "Daddy's home!!" (or something like that) and stops and says "You're not daddy."

Over the course of the movie, she keeps telling him you're not daddy, and more or less treats him as a friend or uncle instead of a father. Like in Self/less, (when the girl tells Damian/Mark, "mommas b-day is March 22") she might be giving him hints/clues/reminders to help him fit in. (He is making her a bologna sandwich for her school lunch bag, she tells him, its supposed to be PB&J. Or he is putting something away on the middle shelf, and she tells him it goes on the top shelf. etc.)

At the end of the movie (the wish has been fulfilled, or reality and gone back to normal, or the body swap is over) and the little girl is sitting face to face with her father (or maybe he has picked her up) and she looks into his eyes and says something like "Daddy's back".

And the movie ends.

I think that it may be "The Family Man" starring Nicholas Cage.

The film centers on a man who experiences what his life might have been if he had made a different decision earlier in his life.
...
On Christmas Day, Jack wakes up in a suburban New Jersey bedroom with Kate and two children. 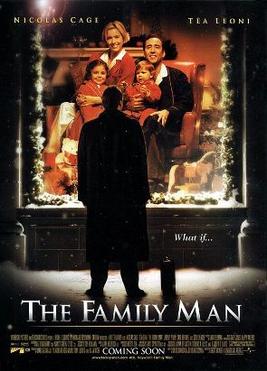 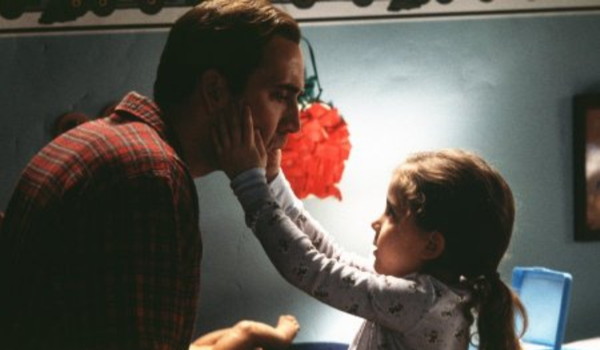 Jack Campbell and his daughter

12
Sci-fi Movie Identification - Humans stored alien in a big concrete block and then it escapes
6
90's movie about an alien teaching a girl special powers and then rescuing her
4
A horse that turns into a unicorn with a girl who meets a leprechaun thing
9
Movie about a woman and her young daughter; a person they know killed her in her past life
12
Movie with elfin characters, a girl having a vision, and an adventurer boy
8
60s-70s movie. Man makes a wish he was a rock star. But it does not work out