I had as a child (early 1960s?) a boys anthology of stories of various genres, like westerns. It included several short stories from Arthur C. Clarke's The Other Side of the Sky/Venture to the Moon. Each was illustrated, e.g. "Feathered Friend", "Robin Hood F.R.S."

Does anyone have any idea of the details for this anthology book because I dearly want to get those drawing illustrations? I have not seen them anywhere else although it is possible they may have been used in a science fiction magazine although I have had no luck in that direction.

The Illustration for "Robin Hood F.R.S." shows an astronaut in a typical pre-space age moon suit firing an "arrow" up into space (towards a lunar plateau).

The Internet Science Fiction Book Database has no record of any such book.

Some of the illustrations can be found here and here 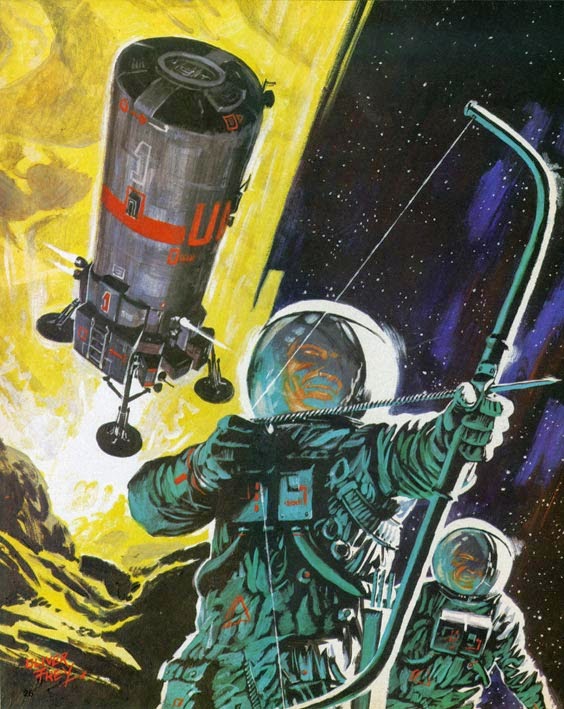 Not the answer you're looking for? Browse other questions tagged story-identification anthology-book illustrated-story or ask your own question.

14
A children's science fiction short story collection from the 1980's
8
Short Story about aliens who offer to save earth's animals by taking them to a sanctuary on another planet
14
Short story about astronauts being killed one by one by a non-corporeal alien entity on a deserted planet
9
Old book about space travel c. 1930-1960
8
Kids' science fiction, 60s or early 70s, moon worms