French movie: a few people gather in a cold/frozen place; guy hides in locomotive and gets shot

It might be ~20 years ago that I saw part of this movie on TV in French language (maybe on TV5, maybe on Arte), but I'm not entirely sure it was of French origin. All scenes were calm and without action sequences - it all seemed to be quite dystopian, as if more and more things just stop working. The atmosphere was full of hopelessness and abandonment, and all scenes displayed coldness, mostly through ice - as if it's a slow freezing apocalypse.

The movie was fully colored and might have been produced during the era of 1980 to 2000. Based on the humanoids (just normal persons/actors), I suppose it's displaying the future. I have no clue who acted in it or what its title could be - but I was always interested in seeing it in full.

Pretty sure this is Bunker Palace Hôtel (1989). 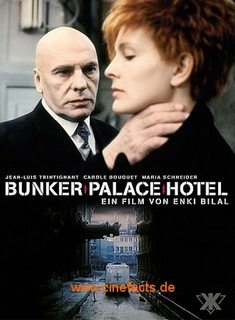 In the imaginary dictatorship of a futuristic world, rebellion has broken out. The men in power scramble to the 'Bunker Palace Hotel', a safehouse built long ago for this contingency. A rebel spy sneaks in and observes the raving of the powerful and decadent inhabitants. They wonder what has happened to their leader, who has not arrived.

It is a French film, and it definitely has scenes with locomotives (the first one is about 8 minutes in), the scene with the party and the humanoid band (about 32 minutes in), and the one with a female humanoid giving a man a massage by a pool, before breaking his leg (about 45 minutes in).

3
60's-70's film about a boy working in a printing press shop, set in Europe during the Renaissance

13
A dark French movie about a little girl, a big guy, and a mad scientist
7
Looking for 80s sci-fi movie, Aliens who fuse, Robotic Band Members
8
What is this 50's or 60's "alien invasion" movie
6
80s/90s zombie(?) movie with a "stolen record" of a shower scene
8
Movie with a demon that forcibly impregnates women
5
Movie with broadcast killer?