Was this WandaVision twist revealed before episode 7?

In the latest episode of WandaVision, we learn that

Agatha is secretly a magic-user who's been manipulating Wanda.

We're then shown (in flashback) a number of pieces of footage from various different angles that clearly indicate what was going on.

If I'd been eagle-eyed enough, would I have seen those incidents in earlier episodes?

I’ve been back through and watched the scenes and unless I’m just not eagle eyed enough it doesn’t look like you’d be able to see the manipulations shown in the montage. Even in the magic show scene she is shown a lot around the manipulation moment but as far as I can tell not doing the manipulation, it cuts to Vision when she’s doing that.

That said there are clues something is amiss with Wanda not controlling everything and something amiss with Agnes. Perhaps the biggest of these is that Wanda didn’t bring Pietro in and was confused by his presence but seemed to know who it was.

WANDA MAXIMOFF: I didn't do that. I... You don't believe me.

VISION: Wanda, I want to, but at this point, I'm ignoring statistics entirely.

Then we have how SWORD couldn’t identify her but could everyone else. 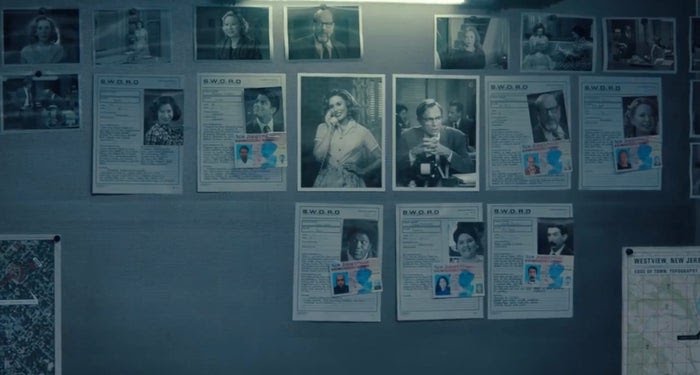 In this episode as well when it is revealed we also get a few hints including Billy saying she is quiet on the inside. He also remarks how it is quiet in her house where normally he can hear others. I think it’s also worth mentioning how she always seems to be around at the right moment and isn’t all too fussed/phased about the magic things happening. Even if that could be explained away by Wanda’s manipulation.

We also see how Agnes behaves a bit differently to Norm and others that Vision frees when he frees her. She’s a bit more aware and not so panicky as the other residents. And of course we now know that she was aware in that scene. Also she drives off at the end but she’s still outside of Wanda’s control radius, where we see other residents standing still, it’s odd that she can move but others can’t.

On the note of that scene, the montage clip shows Vision pointing with two hands down the road. In the episode clip of it he only ever points with one and at a point when we have full view of Agnes. This means that the memory is likely a manipulation done by Agnes as she’s showing them to Wanda... the montage does play when she sends her magic into Wanda’s head. As such it would be that you wouldn’t see her manipulations as they’re shown because what we’re seeing here isn’t entirely accurate.

The one that made me suspect her was S1E3.

She's outside with Herb and she knows that Monica is from the outside. Nobody else has exhibited that level of awareness prior to that. The other people know they're trapped, but do not exhibit that before Vision frees them.

Then there's the oddity of S1E6

Agnes is in her car on the outskirts of town. There's no logical reason for her to be there. She all but dares Vision to go outside, which triggers Wanda's expansion of the hex.

In addition to the answers already given, I think Agatha's "slip" (if it can be called that) in episode 5, where she asks Wanda if she should do her "line" again. That's also the episode where Sparky dies and, when the kids ask if Wanda can bring him back, Agatha asks "You can do that?" This doesn't explicitly show her as being a witch, but her moments where she doesn't perfectly fit the fake world of Westview are different than other's - we see people crying or otherwise in pain when they break out of Wanda's spell.

The obvious exception to this is the Halloween episode, where Agatha appears to be unwinding and losing her mind under Wanda's spell. We later learn, though, that she was trying to make Vision distrust Wanda at that point, not that she was actually in pain.

It is interesting that Agatha was dressed up as a witch for Halloween, though.

20
What was the thing revealed at the end of the Thor movie?
11
When was the S.H.I.E.L.D. twist decided and who made the decision?
8
What was this weapon that Bakuto used?
4
Who was this character with Killmonger?
4
Why didn't Doctor Strange check this before he created a portal to Norway?
7
Was this character in Endgame?
2
Was Hulk present at this event?
15
Who is this background character before we re-encounter Thor in Endgame?
3
What did Nebula look like before she was a robot?