Where did the hypnotic spiral originate from?

A common trope associated with hypnotists in fiction is the use of spinning spirals to hypnotize people. However, when I tried to look up articles about them online (e.g. on Wikipedia, Google Scholar, or similar non-fiction websites), I couldn't find anything substantial about the use of rotating spirals to induce hypnosis aside from one book I found on Google Scholar off-handedly mentioning their use in fiction and calling it ridiculous.

This leads me to wonder: where did the trope of the spinning spiral disc being used to induce hypnosis originate?

Searching google books, the book Hypnoidal Psychotherapy by Margaret Steger, which was published in 1951, has a section from p. 67 available in a preview snippet which says:

The drowsiness of the hypnoidal state should never be induced by fatiguing the optic nerve. Consequently one should not let the patient fix his gaze on a bright spot of an object or on a rotating spiral, etc.

Also on google books I found the Journal of Dentistry for Children, Volumes 15-17 with this excerpt on page 28:

Southern California Branch A. S. D. C. presented for their April program, "Techniques of Hypnosis for Therapy" by Mr. Charles E. Cooke, the author of the popular Cooke Hypnotizing Spiral.

Google books list this collection of volumes as being from 1948 but sometimes their dates on collections of journal/magazine issues just reflect the starting date, so this particular excerpt could be from a later year. Likewise Journal - Southern California State Dental Association volume 15, dated by google books as being from 1948, has this snippet (possibly from an advertisement):

His unusual enthusiasm has led him to develop new techniques, write a book, and develop the popular Cooke Hypnotizing Spiral.

Can Hypnosis help you, your patients; or is it just fascinating? Have your questions ready for the expert.

Searching for more information on the "Cooke Hypnotizing Spiral" I found that Cooke had written a book called The Hypnotism Handbook, first published in 1956, which included the spiral: 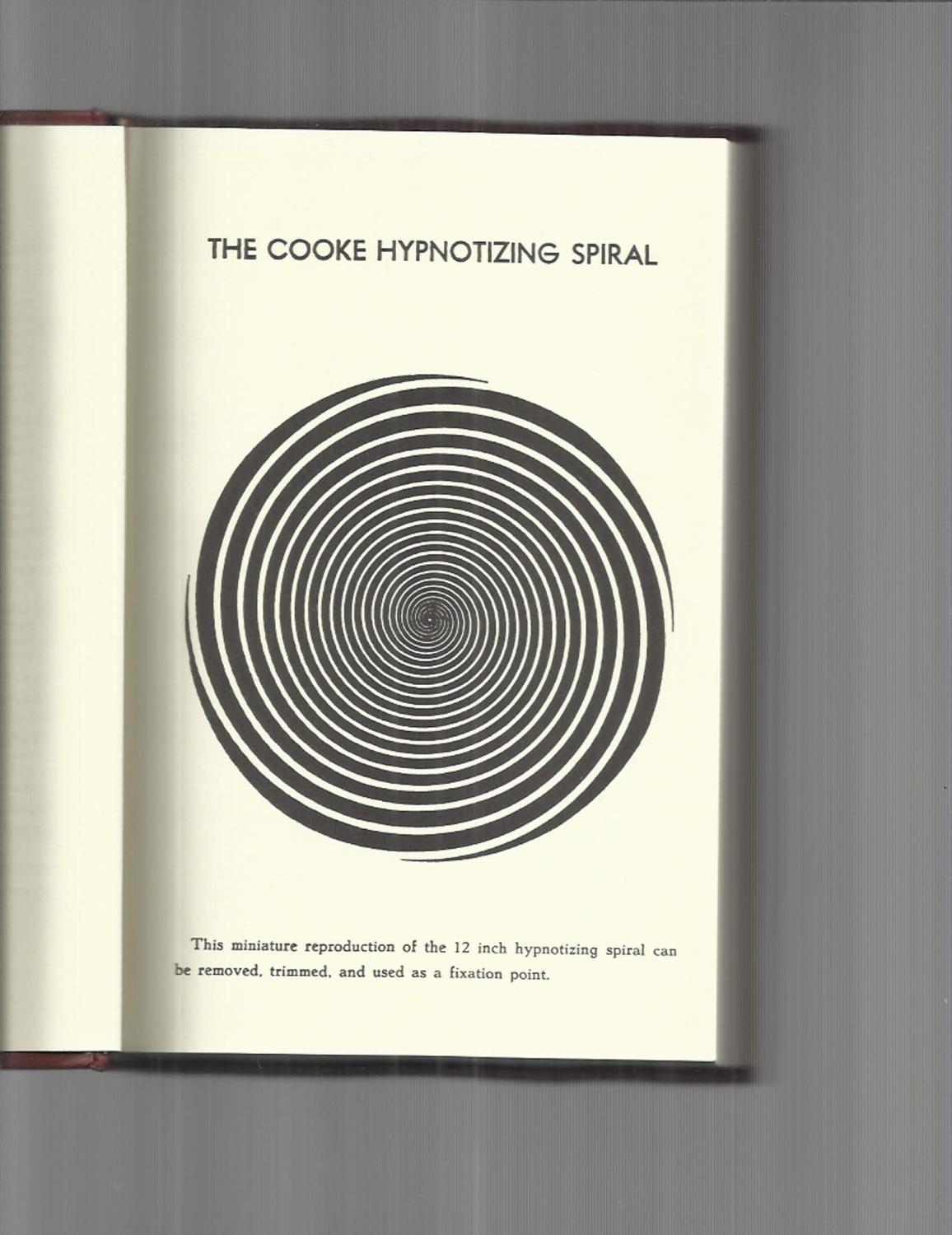 Cooke wrote the book with science fiction author A. E. van Vogt, the wiki article on van Vogt says this was part of his "fix-up" work for other authors, and that "one non-fiction work, The Hypnotism Handbook, appeared in 1956, though it had apparently been written much earlier." The statement about it having been written earlier might be based on a piece van Vogt wrote for a science fiction studies journal, Foundation: The Review of Science Fiction--according to the linked article, "The first eight issues of Foundation were republished in book form as Foundation: The Review of Science Fiction, Numbers 1-8, March 1972 – March 1975", and I found a snippet from that book which says:

The possibility of personal involvement did not occur to me until 1948. By that year I knew a number of psychologists, and in fact was writing a book on hypnotism (The Hypnotism Handbook C. E. Cooke and A. E. van Vogt, Borden Publishing Company, Alhambra, California) for one of them.

Page 249 of The Letters of Milton H. Erickson basically accuses Cooke of being a quack and says that The Hypnotism Handbook was printed by a publishing firm which "publishes solely at the author's expense", so perhaps an inability to find a major publisher would explain the delay between the book being written in 1948 and published in 1956. The book was also advertised in the December 1953 issue of the science fiction magazine Spaceway, where it was said to be coming in spring 1954, and the advertisement included a picture of the spiral, see the snippet here or p. 162 of the full magazine on archive.org here.

So based on all this it seems likely the hypnotizing spiral was developed by a real hypnotist, Charles Edward Cooke, possible before 1948 when he was writing the book with van Vogt, and definitely by 1951 when another psychotherapist named Margaret Steger argued against its use. Though if Cooke was basically a quack, it's possible the spiral had been developed by some other hypnotists and Cooke just slapped his name on it the same way Van Loewe did.

As best I can tell, the first "official" appearance of the black and white spiral disc is Van Loewe's Hypnodisc.

I have also seen references to Jerry Andrus originating it as an optical illusion, although this site claims his actual achievement was splitting it in a method such that three different regions seemed to rotate. Nevertheless, he probably postdated Van Loewe as his illusion came out in 1974.

The first fictional example I've found in live-action film is from Terror in the Haunted House from 1958 as per this site, which would be contemporary with Van Loewe's work.

The film opens with a hypnotherapy session conducted by a psychologist employing a spiral “hypno-wheel,” which immediately recalls the Psychorama title card opening the film. The implied association of subliminal messaging with hypnosis is unmistakable.

Predating that, as pointed out to me by DavidW, the "The Hypno Gun" story in the Donald Duck predates that by 6 years, having been released in October 1952 (written on March 6th of that year).

See this excerpt from Encyclopeadia Britannica

The techniques used to induce hypnosis share common features. The most important consideration is that the person to be hypnotized (the subject) be willing and cooperative and that he or she trust in the hypnotist. Subjects are invited to relax in comfort and to fix their gaze on some object. The hypnotist continues to suggest, usually in a low, quiet voice, that the subject’s relaxation will increase and that his or her eyes will grow tired. Soon the subject’s eyes do show signs of fatigue, and the hypnotist suggests that they will close. The subject allows his eyes to close and then begins to show signs of profound relaxation, such as limpness and deep breathing. He has entered the state of hypnotic trance. A person will be more responsive to hypnosis when he believes that he can be hypnotized, that the hypnotist is competent and trustworthy, and that the undertaking is safe, appropriate, and congruent with the subject’s wishes. Therefore, induction is generally preceded by the establishment of suitable rapport between subject and hypnotist.

This suggests to me that the use of a wheel, swinging pocket watch, etc. are not useful in hypnosis itself; it is merely a tool to guide your focus. So, answering your questions, I would say that it is not necessary, but merely a way to establish focus. As for when this came into existence, I could find no credible source, but popular websites suggest it came into existence in the 19th or 20th century.