Does the Victoria Line pass underneath Downing Street? 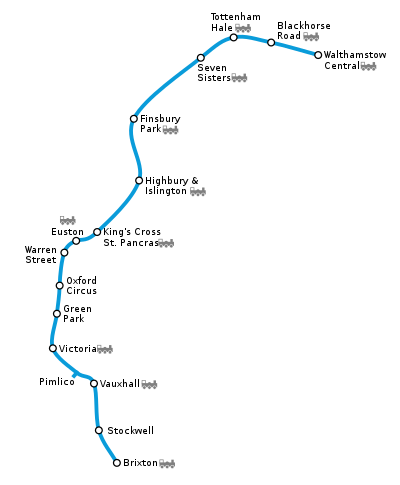 As I know, the car which contains

departed from Victoria station and exploded underneath Downing Street. How could this be possible?

The remark made by V was:

the Victoria line is blocked, twixt Whitehall and St. James.

There are two problems with relating this to the Victoria line which we know from our reality. Firstly, as the map shows, the Victoria line does not go to St James or anywhere close (although it does pass almost directly beneath Buckingham Palace). Secondly there is no tube station called "Whitehall". Assuming that Whitehall corresponds to the real-life station of Westminster, the only tube line that does connect these stations is the Circle and District line. This gets to within 200 m of 10 Downing Street (although it does not actually run beneath it). 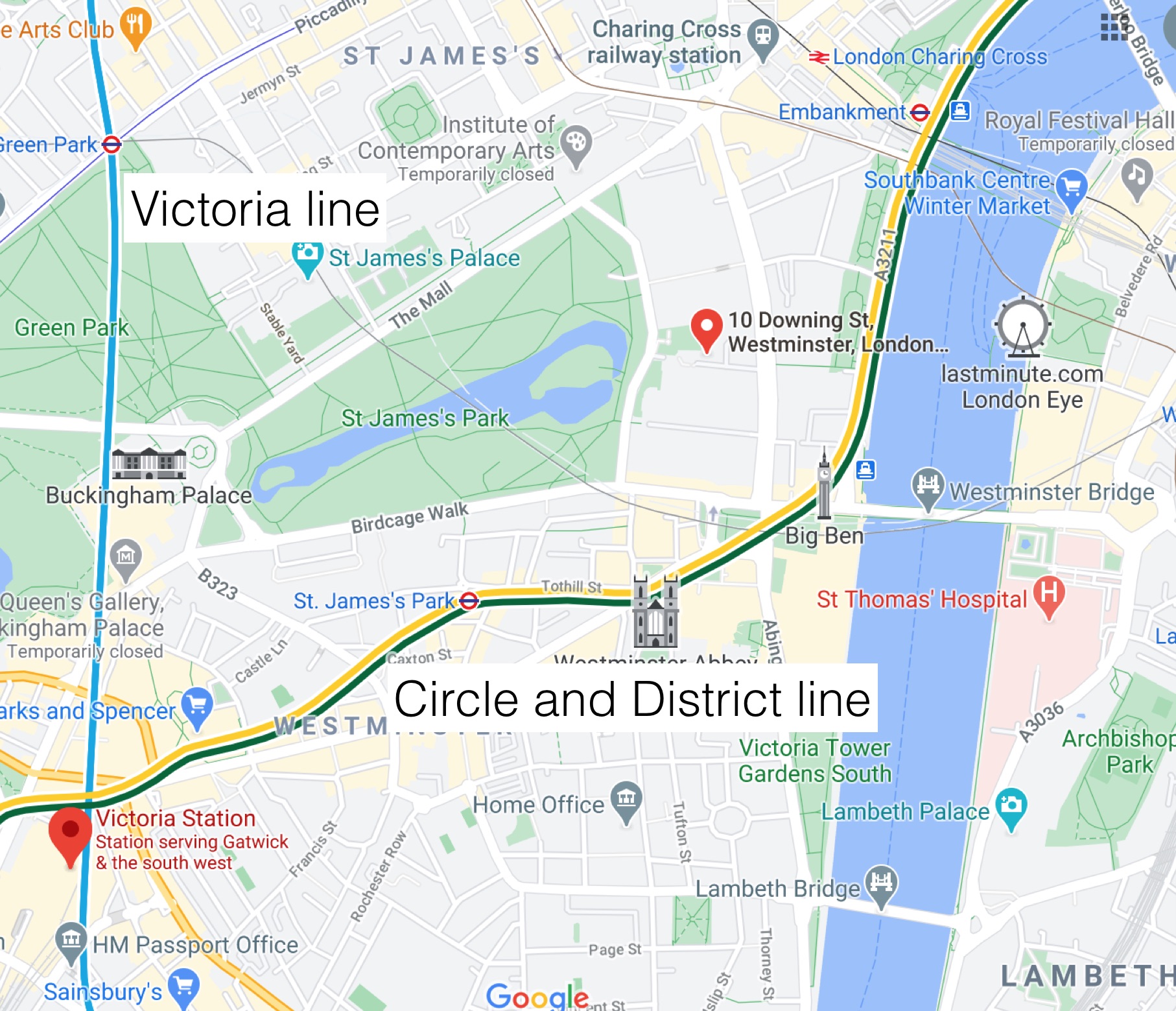 So the only solutions I see are either that V misspoke and that the train actually traveled along the Circle and District line. Alternatively, given that V for Vendetta takes place in an alternate reality, the Victoria line takes a different trajectory there. Given the mention of "Whitehall station", which does not exist here, this may be the more likely solution.

Following Anna's comment, it is apparent from the map shown in the graphic novel that the line in question corresponds to the Circle and District line in our reality. So maybe in the Vendetta universe it is simply the case that that line is named as the Victoria line (and its route makes a little jink to take it under Downing Street). Out-of-universe, maybe Alan Moore just got the name wrong. Closer inspection of the Vendetta map shows a "Strand" station between Charing Cross and Leicester Square. That's not present in our world any more, so the networks are slightly different. 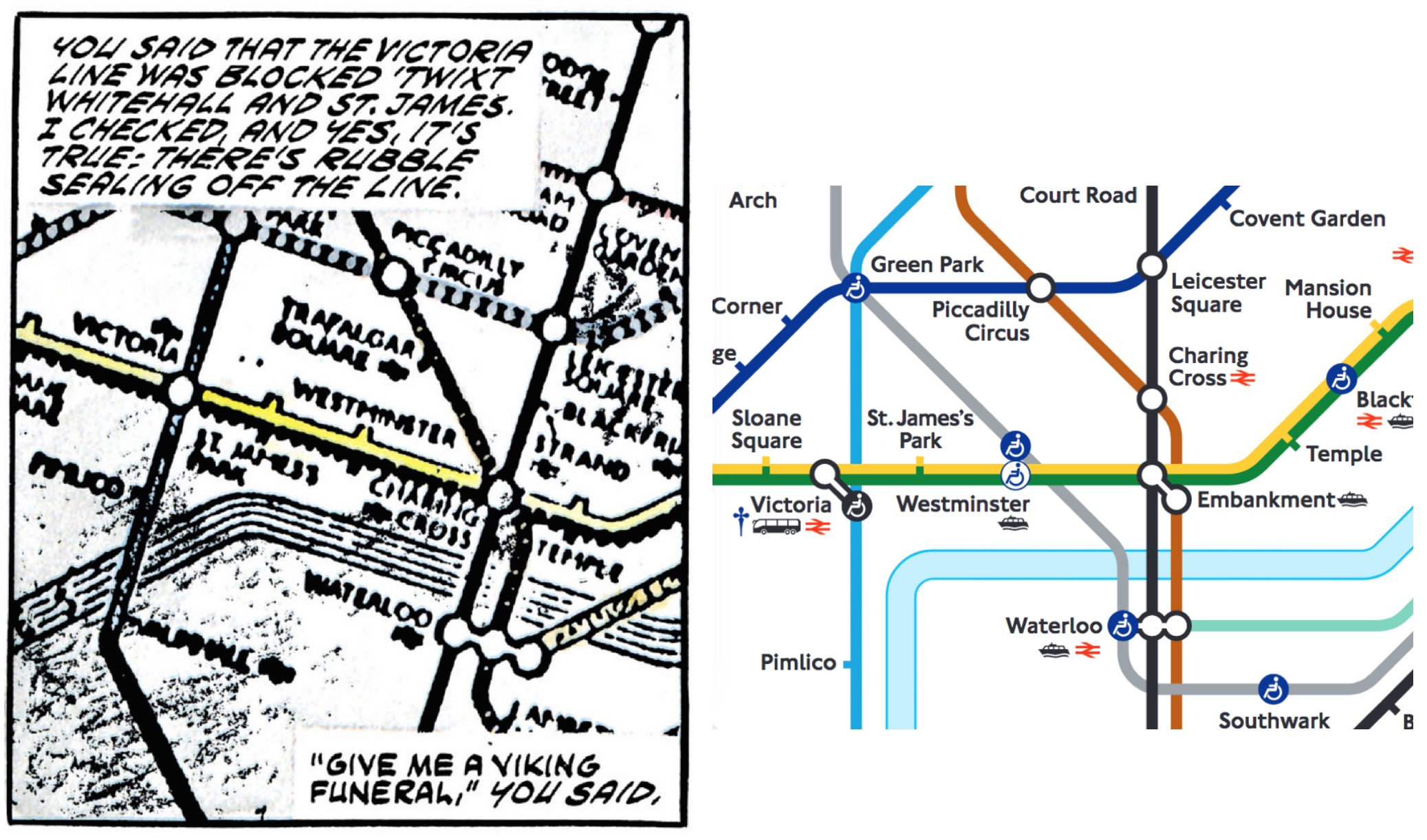 In the past, there have been many different routes proposed for new tube lines, and each new line which was proposed came with multiple different proposed routes at different stages before construction began.

It is not difficult to see how a novelist, writing about the tube network in the 1980s, at the time when planning was in progress for the new Jubilee Line, could have been writing at a time when the route, which was fairly uncertain at many stages of the planning, was intended to pass much closer to Downing Street.

The novel is set 15 years after 1982, the date of writing: it is perfectly reasonable to take the view that a writer in 1982 could legitimately have believed, given the uncertainties involved, that a decade and more later the new Jubilee line would lie quite close to Downing Street. He was speculating about a largely unknown future.

The proposed route which would have routed the new line from Westminster tube station to the existing station at Picadilly Circus, instead of to the neighbouring station at Green Park to which it now runs, would have in fact taken the Jubilee Line beneath Downing Street.

One point I can definitely clear up. The use of the name 'Victoria Line'. Many of the initial proposals were to build the new line, today called the Jubilee Line, as a simple extension of the Victoria Line. It was originally going to be much shorter: it grew in the planning, until eventually it became a completely new line: but in 1979 it started out as a short extension to the existing Victoria Line. It was a long way down the road in the construction phase before the belated decision was taken to name it the Jubilee Line.

No, it's not possible using the tunnels as they exist in our universe. The most common maps of the London underground are schematics and not geographically accurate. However the latter do exist and show the Victoria line running well to the west of Downing Street. 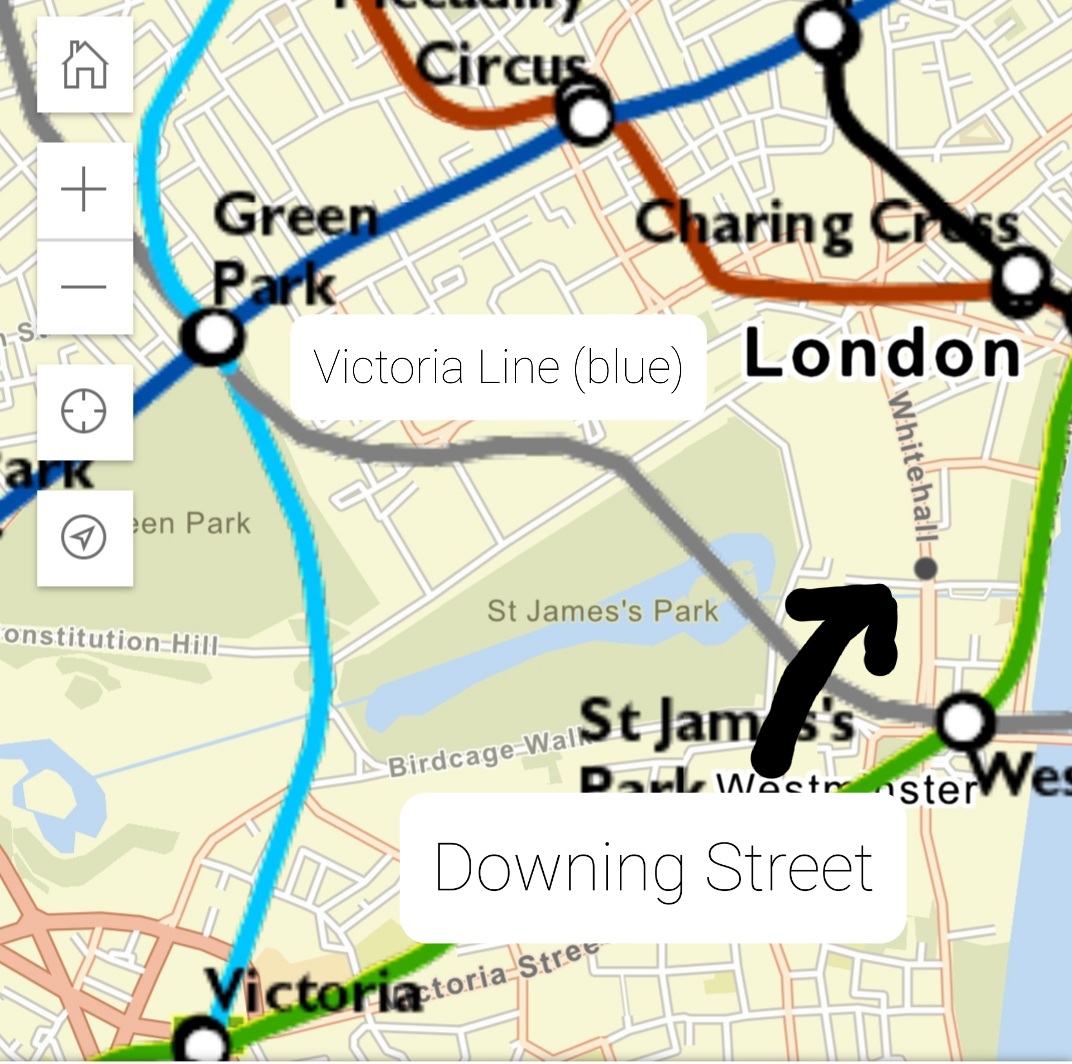 Not the answer you're looking for? Browse other questions tagged v-for-vendetta or ask your own question.