The basic plot is that a young woman — possibly a queen — is imprisoned when an invading army kills her husband. She is awaiting her fate — possibly death or being forced to marry this invader — when in her dungeon she is visited by a man/magician/sorcerer who says he can save her and take her away from this place. I can't remember if she ever sees this person's face, but she takes a risk and trusts him.

The sorcerer frees her by sending her through time and space to his own kingdom. When she gets there, she finds that the sorcerer who saved her is dead, but she needs to marry the king to save the kingdom from an usurper.

I think in her dreams the sorcerer might visit her to help her solve the palace intrigue. And there is a possible dream scene of two battling magicians on a lake playing chess.

The book cover, from what I can remember, was of a sorcerer — but not the ancient old bearded type — standing behind a young woman. The story is very much fantasy/medieval in location but the book makes it seem more science fiction. The story was stand alone; it was not part of a series at all.

Might this be Sorcerer's Legacy by Janny Wurts, published in 1989? 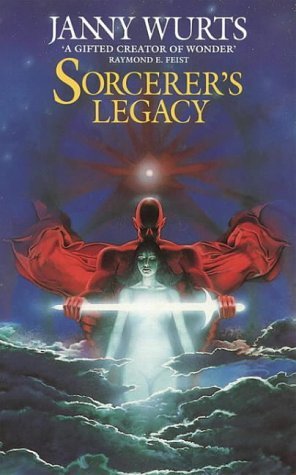 It is a standalone book. It was published around the time you suggested. And both the cover and this plot summary from bookswithoutanypictures.com seem to match your description very well:

The basic premise is this: a woman named Elienne has sex with her husband. She’s pregnant, but doesn’t know it yet. The next morning, an invading army kills her husband, and Elienne is captured and thrown into a cell. She’s then visited by a wizard with an unusual story. He is traveling from across time and space because in his kingdom, a prince has to have an heir by a certain age in order to take the throne, otherwise he is killed and the next in line takes over. An evil wizard sacrificed a virgin to curse Prince Darion with infertility. Because Elienne is so early in her pregnancy, it shouldn’t be detectable by magic, and so if she finds Darion and sleeps with him quickly, she should be able to pass of her husband’s child as his. And since Elienne’s current situation is hopeless, she decides to go along with the wizard’s plan, messed up though it may be.

And so Elienne is carried away from her home through the icy plains of magic. The wizard who transported her through time is killed in the process, and so Elienne is left on her own to navigate court politics in a foreign kingdom, and to try to keep herself, prince Darion, and her child from getting killed in a plot to seize the throne. Can Elienne, a total transplant to this life, manage to battle an evil wizard to ensure Darion’s succession? And can she do it while maintaining her resolve not to develop feelings for him?

Not the answer you're looking for? Browse other questions tagged story-identification novel magic or ask your own question.