In Season 3: Episode 18 (How Santa Stole Christmas) of the rebooted Duck Tales, Webby joins McDuck to help Santa Claus deliver his gifts. When Scrooge is delivering the last gift, Webby says to Santa:

You and Scrooge are the perfect pair: two red‐coated mythical immortals traveling the world.

As far as I remember, Scrooge has never been mentioned as an immortal. I have no idea about the comics; I haven't read any of them.

So is this just some sot of a figure of speech? Or is Scrooge McDuck truly an immortal?

According to Don Rosa, Scrooge ("$crooge") McDuck died in 1967, hence he cannot be an immortal. 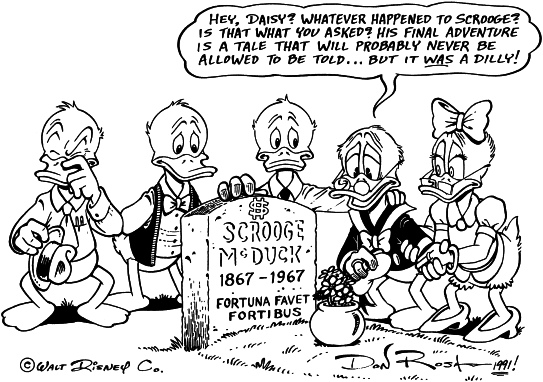 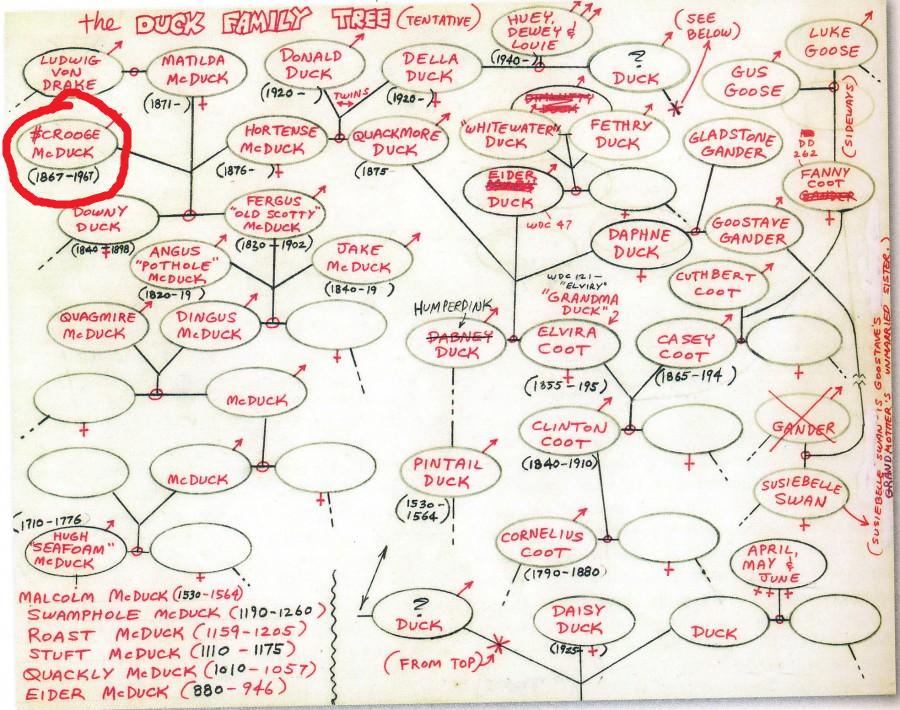 This is backed up in a "Duck Family Tree" that was released a couple of years later. Again, Scrooge's date of death is the same.

Now, I see my own message and I reminded myself to try to list the birth/death dates from my notes. I see that I did not mess around with the fringes of the tree yet -- therefore, I never made any notes concerning Fanny or Gus; there wasn't much going on in that branch, so the dates didn't matter much as long as I knew which generation they each belonged in. Of these other characters, the dates are sometimes partially given in "The Old Castle's Secret" as regarding the McDuck ancestors. Other dates are exact when there was a need to be, otherwise I didn't get fancy and I just used 5 year increments, 1920, 1925, 1930 and so on. (I wouldn't say 1921 if there was no specific reason to since I knew I might still change a date here or there someday for some reason. If a date ends in a blank, that means I figure the character lived well past 1967. If a date ends in a "19??", that means I don't know when the critter died, but they must surely be as cold as a carp by 1970!

Scrooge McDuck in Duck Tales 2017 is probably not immortal like Zeus, Storkules, or Selene, but has greatly extended his life by at least one supernatural method. Since Webby is only 10 or 12 years old, Scrooge who is about 10 to 15 times her age may seem like an immortal to her.

Scrooge's age is discussed in the Wikipedia article on him:

According to Carl Barks' 1955 one-pager "Watt an Occasion" (Uncle Scrooge #12), Scrooge is 75 years of age. According to Don Rosa, Scrooge was born in Scotland in 1867, and earned his Number One Dime (or First Coin) exactly ten years later. The DuckTales episodes (and many European comics) show a Scrooge who hailed from Scotland in the 19th century, yet was clearly familiar with all the technology and amenities of the 1980s. Despite this extremely advanced age, Scrooge does not appear to be on the verge of dotage, and is vigorous enough to keep up with his nephews in adventures. With rare exceptions, there appears to be no sign of him slowing down.

Barks responded to some fan letters asking about Scrooge's Adamic age, that in the story "That's No Fable!", when Scrooge drank water from a Fountain of Youth for several days, rather than making him young again (bodily contact with the water was required for that), ingesting the water rejuvenated his body and cured him of his rheumatia, which arguably allowed Scrooge to live beyond his expected years with no sign of slowdown or senility. Don Rosa's solution to the issue of Scrooge's age is that he set all of his stories in the 1950s or earlier, which was when he himself discovered and reveled in Barks' stories as a kid, and in his unofficial timelines, he had Scrooge die in 1967, at the age of 100 years.

In the 15th episode of the 2017 DuckTales reboot, "The Golden Lagoon of White Agony Plains!", it is revealed that Scrooge was "stuck in a timeless demon dimension" called Demogorgana for an unknown amount of time, which is used to explain his young look. In the 21st episode, "The Other Bin of Scrooge McDuck!", Webby Vanderquack's research on Scrooge reveals that he was born in 1867, as previously established by Rosa. This would make Scrooge 153 years old as of 2020.

Scrooge is depicted as extremely old in the Duck Tales 2017 television series, which clearly takes place during the 21st century.

In "the Secrets(s) of Castle McDuck!" Aug. 4, 2018, a paper is found with the date April 15, 20__, the last 2 digits obscured from the view of the audience. That was the week that Huey, Dewey, and Louie were born, but since Della was at Castle McDuck then, and she was lost in space before they hatched, they must have hatched sometime between April 15 and April 22 of that year.

According to this list of the proper viewing order and fictional date order:

If "McMystery at McDuck McManor!" happens sometime during the period of 2010 to 2109, Scrooge's birthday in it should be his 143rd to his 242nd birthday.

"The First Adventure!", November 16, 2020, opens in the 1960s, where Mrs. Beakley, Bradford Buzzard, and Black Heron are already adults - Buzzard and Heron decide to found F.O.W.L. The rest of the episode happens decades later when Scrooge has to take care of young Donald and Della and they go on their first adventure together. Since Mrs. Beakley, Bradford Buzzard, and Black Heron are still rather agile in the 3rd season, for the sake of plausibility the episodes of Duck Tales 2017 shouldn't happen any later than the years they are broadcast in, and preferably earlier.

In "the Golden Lagoon of White Agony Plains!", June 23, 2018, Scrooge returns to the Yukon and meets his old rival and love interest Goldie O'Gilt where they had tangled over a hundred years earlier. They each explain - truthfully or otherwise - how they managed to still be alive. I believe that Scrooge's explanation was that he spent a lot of time in a timeless demon dimension.

And possibly Scrooge also spent several decades at Castle McDuck, where he would not have aged. Maybe Scrooge thought living at Castle McDuck with his disapproving father Fergus was like being trapped in a horrible demon dimension!

I note that in "The First Adventure!" Donald and Della look like they were probably born around 1980 in the Duck Tales 2017 chronology, which means their mother Hortense McDuck should have been over a century old when they were born - unless Hortense and/or Donald and Della spent many decades in Castle McDuck without aging.

Scrooge's and Hortense's sister Matilda shows up a Castle McDuck in "The Fight For Castle McDuck!",November 23, 2020, which implies that other McDucks may have avoiding aging by staying at Castle McDuck and/or by living in a demon dimension.

I discuss the chronology of Duck Tales 2017 in threads like:

So Scrooge is not immortal in Duck Tales 2017 but has greatly extended his life by at least one supernatural method. Since Webby is much younger (I think she is about 11 in "How Santa Stole Christmas"), Scrooge who is about 10 to 15 times her age may seem like an immortal to her. Or she may mean Scrooge is someone with everlasting fame and thus figuratively immortal.

I remember reading about this controversial topic in the French magazine bearing his name Picsou Magazine where he is dead the year his creator Carl Barks went into retirement which was 1967 and all of his adventures took place before that date. The death topic was also a little bit complicated in The Life and Times of Scrooge McDuck where Don Rosa had to deal with his parent's death so you see his dead father's feet covered on the bed and in next case he is watching over his son (alongside his mother) from the window.

As for the immortality part and the peculiar observation that he uses technology that wasn't available before 1967, it could be explained the same way Bart and Lisa are still kids since 1989, they didn't have cell phones and the Internet back then, now they do and they still haven't aged and so are his nephews, they are still kids since 1937, or how many comic book and non comic book characters transitioned from analog to digital, Mads Mikkelsen's Hannibal used technology that wasn't supposed to exist in the time predating "Silence of The Lambs" which is when the series is supposed to take place, it's for the narrative and not to be taken in an absolute manner.

The United States "Copyright Term Extension Act" extended the term of US copyright specifically to extend copyright for Disney products - mainly Mickey Mouse, but others also, with other hangers on benefiting.

We can expect a further extension.
Until this gerrymandering is stopped we can expect Scrooge to remain "conditionally immortal".

Not the answer you're looking for? Browse other questions tagged ducktales scrooge-mcduck or ask your own question.

3
Are the Ducktales stories set in the same universe as the Duckverse stories?

16
How wealthy is Uncle Scrooge in the Don Rosa/Carl Barks universe?
172
How can Scrooge McDuck dive into money without hurting himself?
6
Why isn't Gladstone Gander richer than Uncle Scrooge?
35
Identify a comic where Scrooge McDuck was protected against a beam because he went swimming in his money
6
In the Duckverse, do we ever see any other creature besides Scrooge successfully swim in money?
33
Has Darkwing Duck ever met Scrooge McDuck?
19
Why did Scrooge accept the $10,000 deal for the Anaconda Copper Mine in Don Rosa's 1993 comic "The Raider of the Copper Hill"?
2
Why did Don Rosa show Scrooge being so greedy and heartless just before striking it rich?
6
McDuck Frankenstein Movie