Do we know what happened to Barriss Offee?

The last we see of Barriss Offee in the Clone Wars is her being arrested in the finale of season 5 for framing Ahsoka. After that, we never see her again, not when Ahsoka returns in season 7, and we don't hear about what happened to her in Order 66. Barriss is never mentioned by any of the other characters in any media since - not in Rebels, not in season 7. Only in the Ahsoka novel does Ahsoka mention Barriss, but it's an offhand remark about how Barriss betrayed her that is unrelated to Barriss's fate.

We know from Rebels that Luminara Unduli was killed, but as she wasn't Barriss's master at the time that doesn't really give any answers.

People have theorized that she probably was just killed by clones in her prison cell, but this hasn't been explicitly confirmed, even if it does make the most sense. Is there anything about what happened to Barriss after season 5?

As of now, her fate is unknown. She was originally going to commit suicide in her jail cell (per the AMA below with Dave Filoni), but that scene was cut and her fate left open to interpretation.

What happened to Barriss Offee?

In the original script, she died. She blows up her own prison cell. “I didn’t want that fate for Barriss, so I cut that part. I had plans for Barriss.”

In the absence of any evidence to the contrary (and given the lack of follow-up to her story), it seems relatively likely that she was killed in the Jedi Purge.

It might interest you to know that her death was depicted a couple of times in non-canon works.

An animatic from Revenge of the Sith. 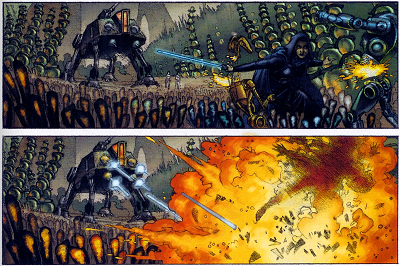 Not the answer you're looking for? Browse other questions tagged star-wars the-clone-wars ahsoka-tano or ask your own question.

5
How does Ahsoka know about Anakin wanting to leave the order?
5
Why was Ahsoka involved in the Siege of Mandalore?
5
When did Vader find Ahsoka's lightsaber?
13
How did Ahsoka know the specifics of Anakin's fall?
8
Did Leia ever meet Ahsoka through the Rebellion?
0
How long before RotS was season 6 of TCW?
8
Did Ahsoka know Padme was pregnant?
1
Which known Jedi and Padawan pairs were of the same species?
4
Was Luminara ever arrested by the Empire?