In A New Hope, Luke only knows about his father from what he's heard from Uncle Owen and Aunt Beru, which isn't much. When he learns from Obi-Wan that he and Anakin were fighters in the Clone Wars, Luke's shocked because he's never heard that before.

Has Luke never heard of Obi-Wan and Anakin as military leaders? In the canon book Lost Stars, the youth living in an Imperial-controlled planet study the Clone Wars, naming Mace Windu as a general in them. So it doesn't seem like Palpatine has entirely wiped out the history of the Jedi, or even took efforts to erase them from memory if they're still being taught in schools.

We know that Luke has had some kind of education on Tatooine, but it is more off the grid than other planets. But given the span of the Clone Wars, and Anakin and Obi-Wan's widespread and heroic fight in it, it seems odd that Luke would've never heard their names. Even if he'd heard about Obi-Wan Kenobi, it is clear that Kenobi is a common name and that Luke wouldn't link the old hermit Ben as being a war hero, but he doesn't recognize the name when he hears it.

There are a lot of reasons for this, but is there a canon-confirmed reason why Luke doesn't know about Obi-Wan Kenobi and Anakin Skywalker? Did Palpatine erase their names, or is Tatooine just not linked well enough to the rest of the galaxy that Luke would learn about them in school?

(Legends:)The Empire did an extensive propaganda campaign to remove Jedi's from the war effort. In the comic Republic 78: Loyalties where Palpatine introduced Lord Vader to the officers of the newly formed empire it is shown that officers are discussing that they suddenly started receiving credit for actions/campaigns done by the Jedi with Vader force choking anyone who dared to tell the truth: 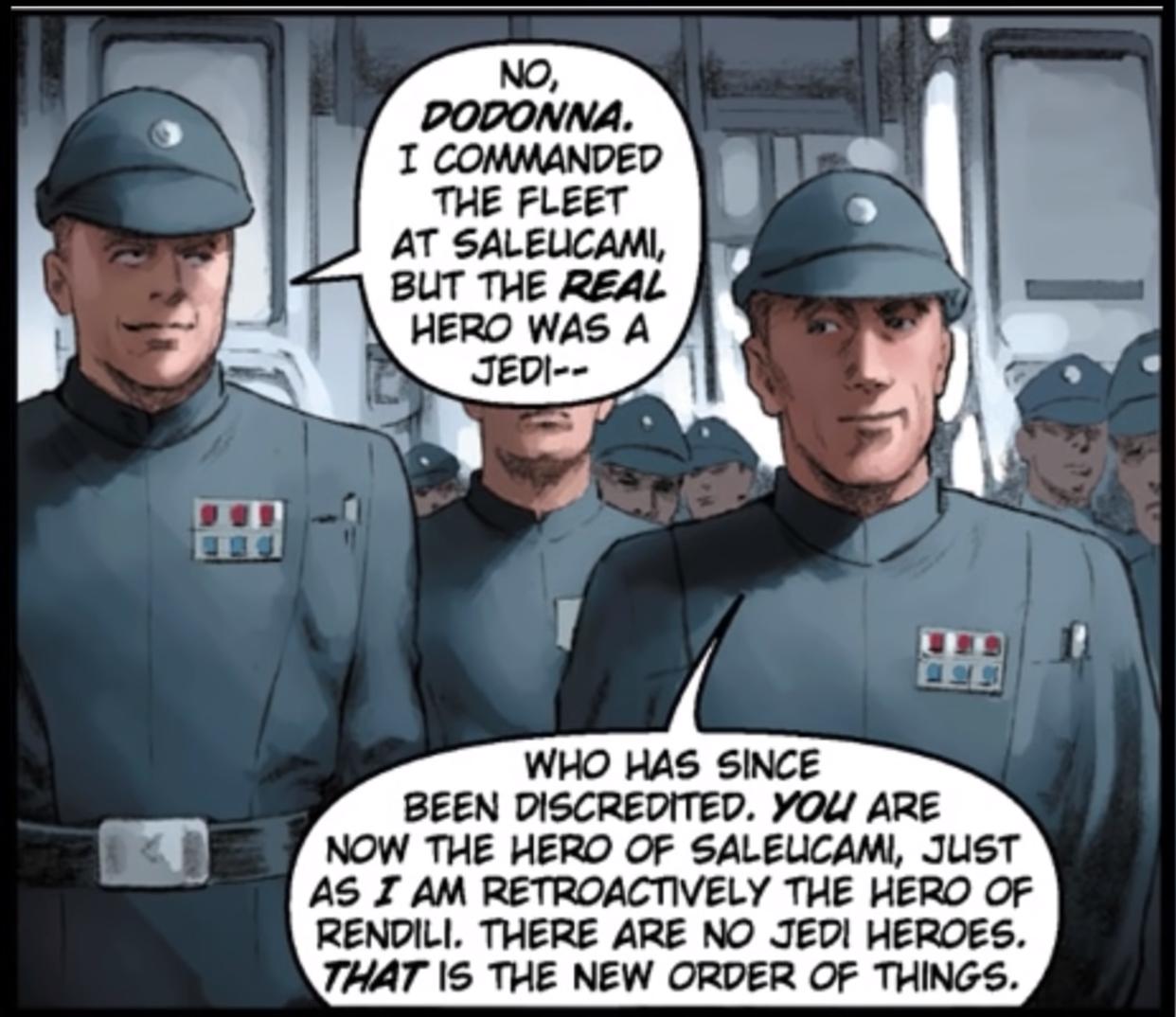 So after the transformation from Republic To Empire the media displayed the Jedi as terroristic religious monks and what reason would people have to disagree with the media? Prior to the war the Jedi often secluded themselves leaving an aura of mystery around them, and seeing people usually fear what they don't know. So given the choice between scary monks who have a habit of cutting of peoples arms with light sabers or an empire that saved you from a droid onslaught...who would u believe?

And concerning Owen and Beru, you can clearly see in A New Hope that they were less then happy with the path Anakin followed. And in the movie Beru said that Luke is much like his father, which worries Owen seeing he fears that if given the chance Luke would follow the same dark path his father did.

Not the answer you're looking for? Browse other questions tagged star-wars obi-wan-kenobi anakin-skywalker or ask your own question.

67
Why did Luke Skywalker call Obi-Wan "Ben"?
20
Are there any published details of Kenobi's communication with Lars family on Tatooine before ANH?
39
Why did Luke leave Owen and Beru's remains?
29
Do Aunt Beru and Uncle Owen know that Anakin Skywalker is Darth Vader?
37
Did Aunt Beru and Uncle Owen know that Obi-Wan Kenobi was a Jedi?
8
Did Obi-Wan ever find out about Anakin going to Tatooine during Ep. II?