I ask because Twilight Sparkle was born a Unicorn, and Cadance was born a Pegasus. Also, only Flurry Heart was confirmed to be born an Alicorn.

In this interview, Lauren Faust, creator of My Little Pony Friendship is Magic, indicates that Princess Celestia embodies the traits of Earth Ponies, Pegasus', and Unicorns. I'm guessing the same applies to her younger sister, Princess Luna, who was also alluded to in this statement:

Color has never, ever been depicted as a race indicator for the ponies. When your characters are purple, blue, orange, yellow, black, white, red, green and pink, who’s to say which is supposed to signify a white person, a black person, an Asian person? The only races in My Little Pony are Earth Pony, Pegasus and Unicorn, and they are all treated equally, ruled by a leader who embodies the traits of all three. This leader is white only to signify day, and she co-rules with her sister, who is purple to signify night. Additionally, I’d just like to assure anyone who might still question the guards at the foot of the Princess’s throne that their colors were picked arbitrarily–and they are paid for their service.

This is backed up by trading cards that list their pony type as Pegasus, Unicorn and Earth: 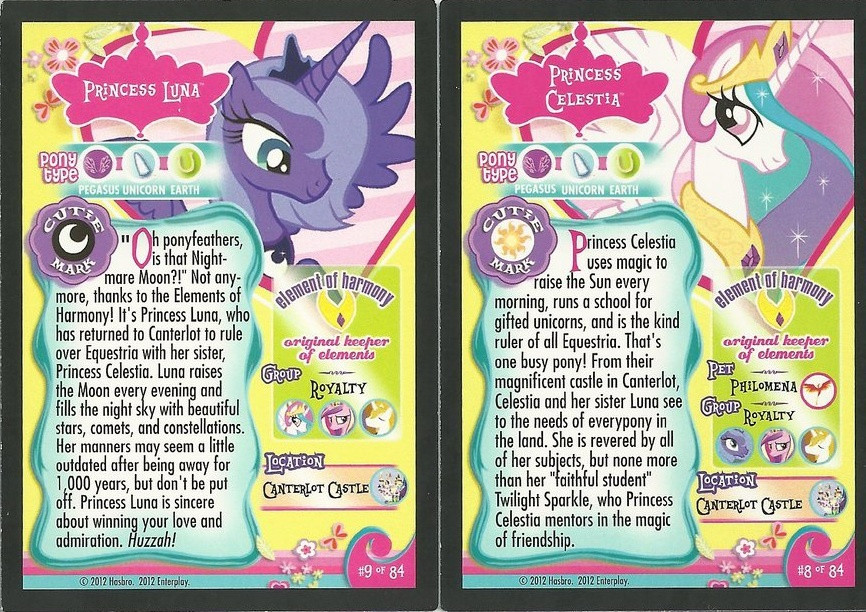 Their type has also been listed as Alicorn in trading cards: 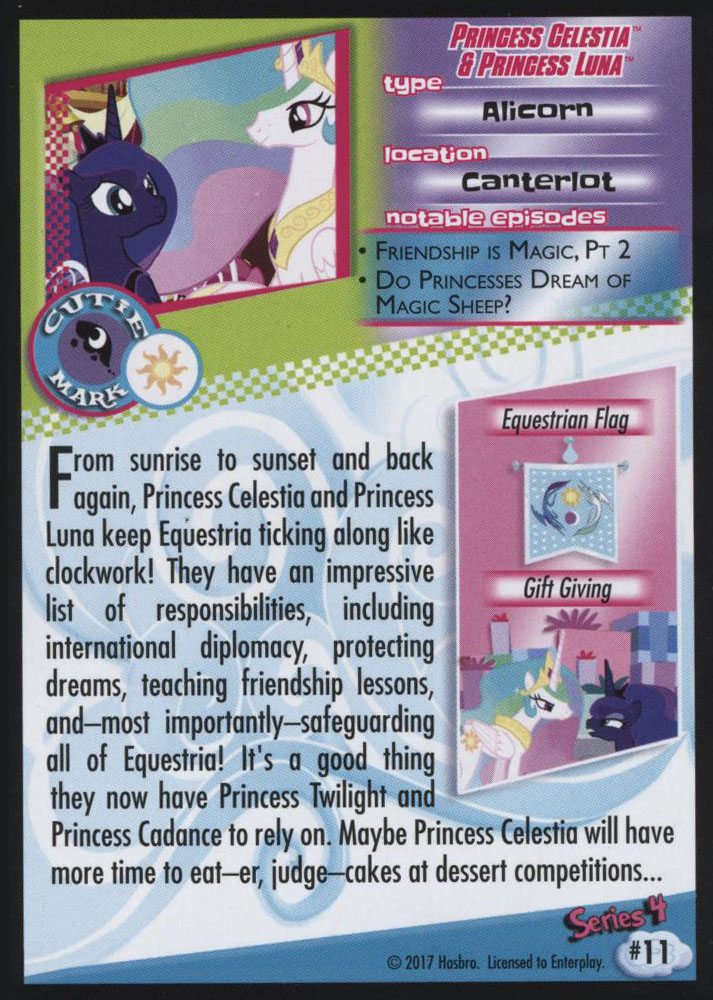 Adding to the other answer, the Journal of the Two Sisters actually narrates how Celestia and Luna came to be princess.

After the three tribes of Earth Ponies, Pegasi and Unicorns came to an agreement, Star Swirl came to them for a specific reason

“They knew that Alicorns stood for everything Equestria was founded upon: love, harmony, and friendship. And because Alicorns are a combination of Pegasi, Unicorn, and Earth ponies, they believed that we could represent the citizens of Equestria in an unbiased manner......so they asked us to be their princesses.”

This passage confirms that the two sisters were already Alicorn at the time, and that should be enough to assume they were Alicorn since birth for at least two reasons:

The Journal was considered canon by the original show writers, including Amy Rogers. So that is probably very close to the original intended plot.

.... but there is a problem. The latter writers managed to meddle with the script and as a result the events of the book are somehow incompatible with the later added plotline about the seven pillar the last show seasons introduce.

So, basically, it is quite clear that they were at least originally intended to be natural born Alicorn, but the final seasons kinda destroyed some of the lore that enforced that idea.

2
Why didn't Twilight notice the cause of her friends changes sooner?
8
Are all Alicorns Royal?
9
Are earth ponies represented in the government of Equestria?
8
What is the significance of the background alicorns?
6
The Alicorn-Earth Pony Connection
5
Was the ponies' knowledge of Night Mare Moon retconned in "Luna Eclipsed"?
5
What can Twilight Sparkle take with her when teleporting?
5
Why did Starswirl the Bearded invent an 'amniomorphic spell'?
7
Were Celestia and Luna born as alicorn?