Who designed the Emperor's chair from "Return of the Jedi"?

I am looking for information on the designs of Emperor Palpatine's chair from Return of the Jedi (1983).

There is information available about who designed the chair Palpatine uses in Episode III. I'm looking for similar information regarding his throne in Episode VI. 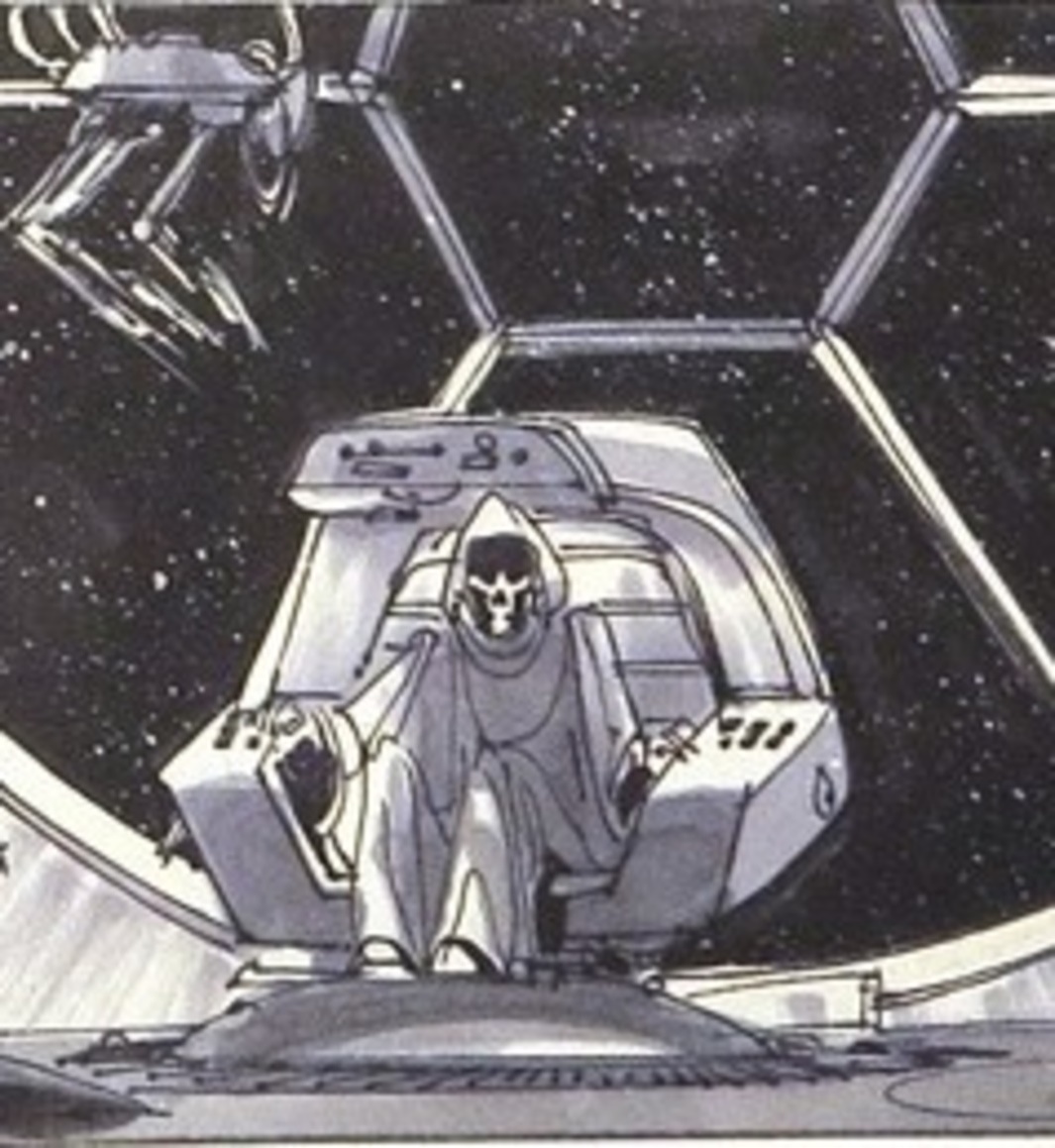 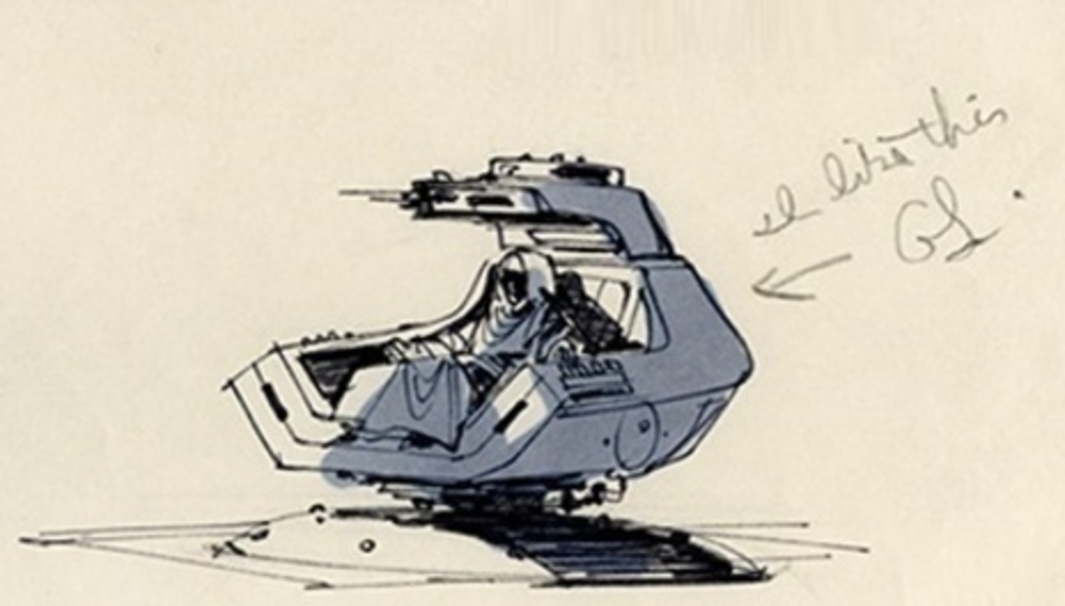 The Art of Star Wars Episode VI: Return of the Jedi 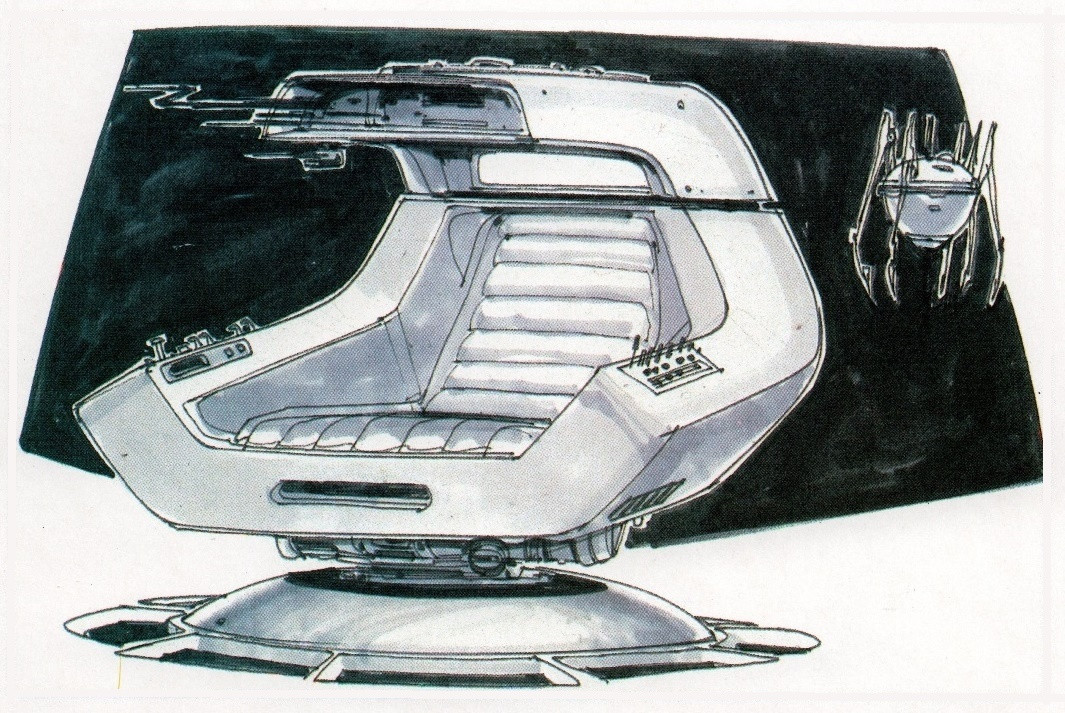 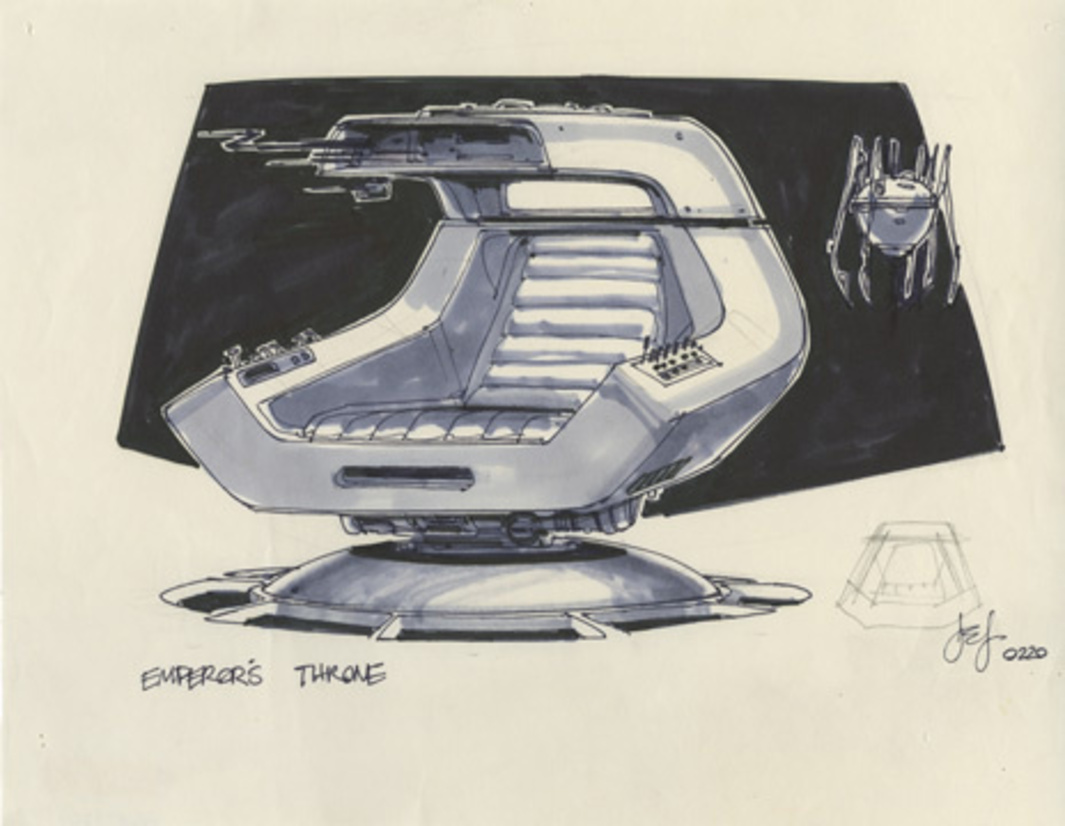 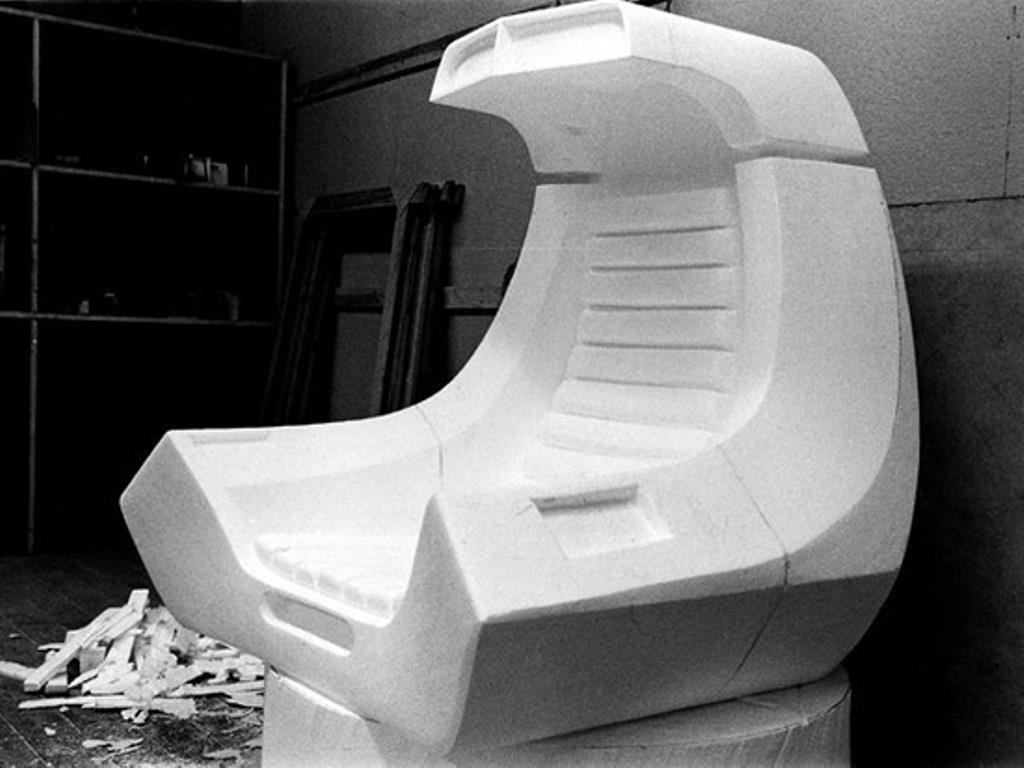 I find it interesting that at some point somebody changed the leather pattern on the chair so the back matched the seat, instead of having contrasting strips like in Joe Johnston’s sketch and the initial sculpture. They also carried the padding up to the very top of the chair, whereas in the sculpture there was a dark void that framed the crown of the Emperor’s head, rather like an anti-halo. Was that meant to have a glowing panel installed at one point like in the Johnston sketch? I can see how that might make lighting his face difficult on set. 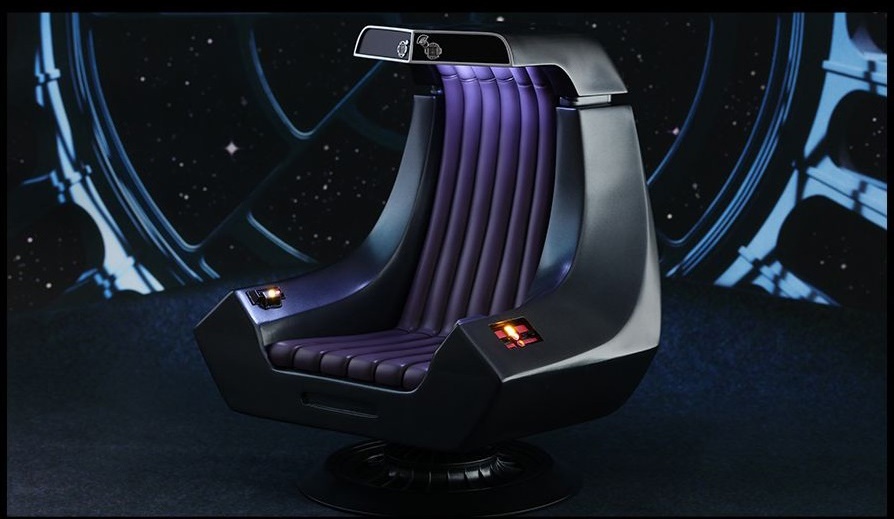 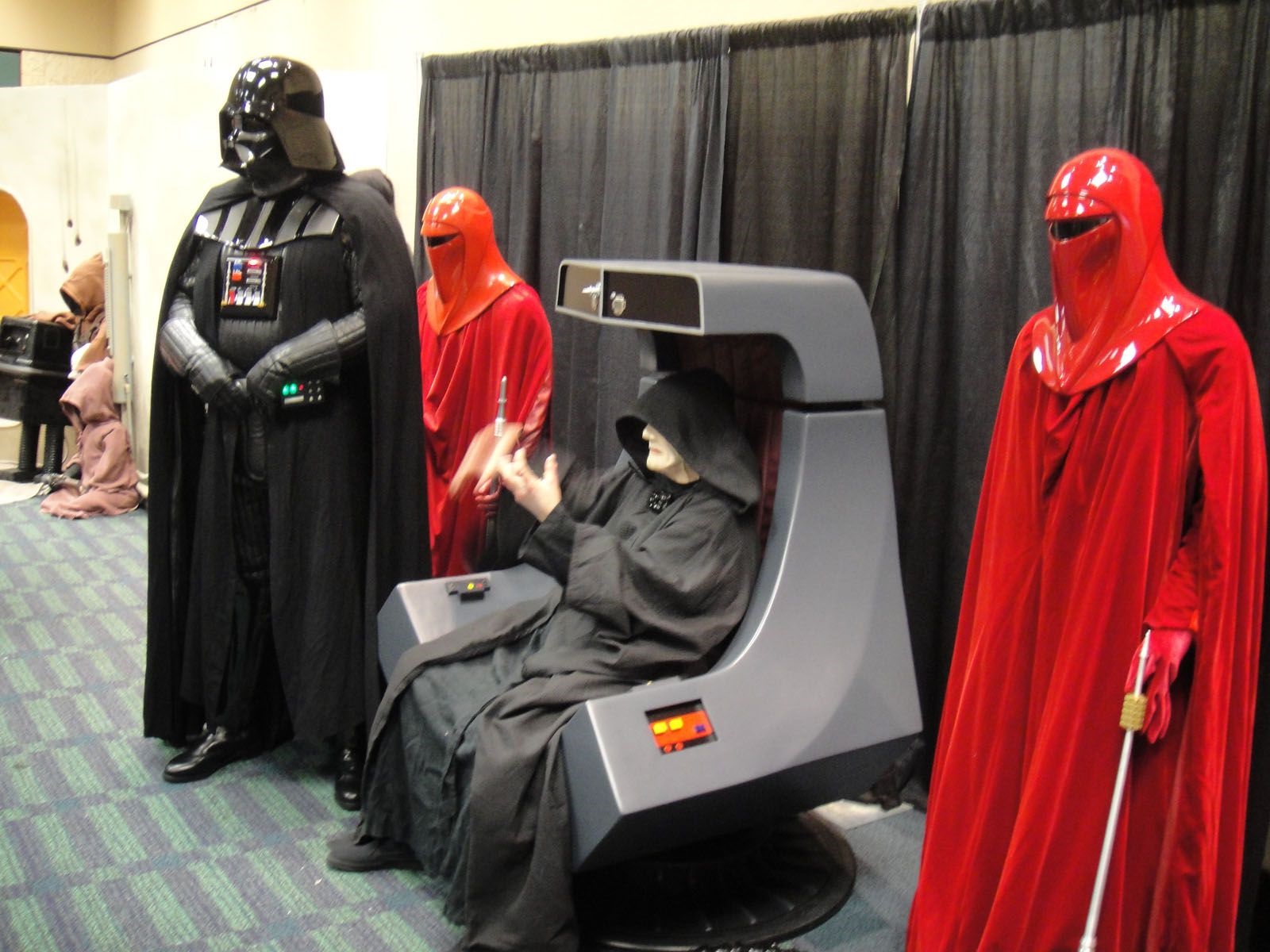 The design of the throne was definitely a group effort. The Return of the Jedi Sketchbook shows a selection of concept drawings for the throne room on the Death Star, including an interesting example that shows the throne suspended from the ceiling. 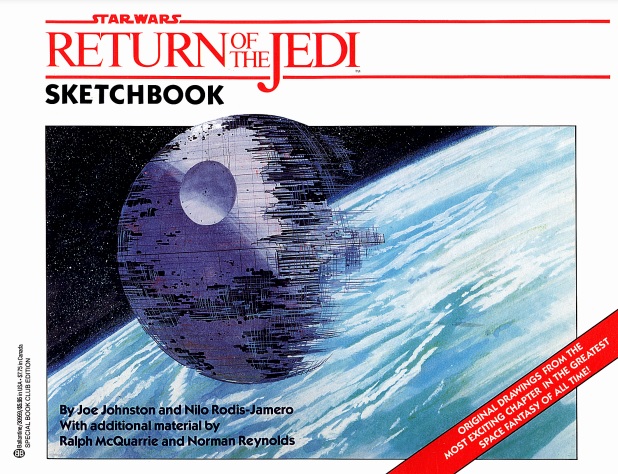 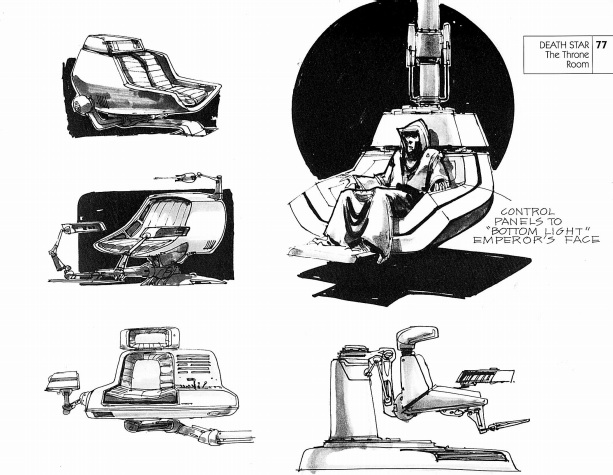 The black-and-white concept art in the book was produced by Joe Johnson, Nilo Rodis-Jamero, Ralph McQuarrie, and Norman Reynolds. As you can see from the differently styled sketches of the throne, more than just one person contributed to the design process. The throne suspended from the ceiling is the work of Johnson, the art director—visual effects (identifiable by his handwriting on the comment). From the style of the drawing (especially the shading), the other concepts on that page are identifiable as the work of Rodis-Jamero, the assistant art director.

There was color artwork by McQuarrie (conceptual artist), bit it came at a rather late stage of the design process, since it shows the spoked window ("a fitting background for the supreme ruler of the galaxy," as the Sketchbook comments put it). 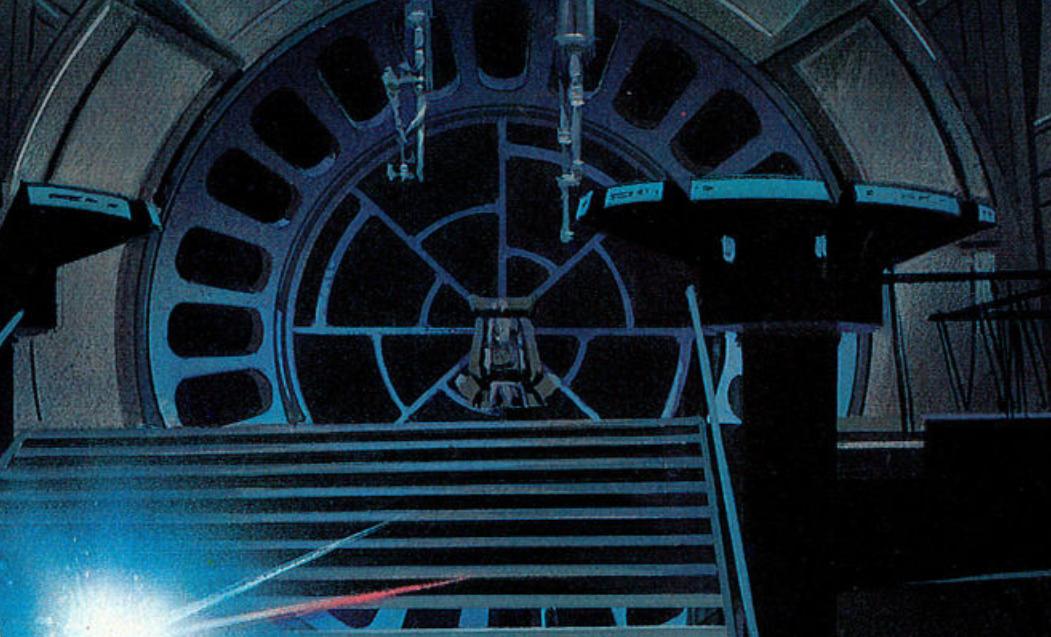 The general shape of the throne and the design of the surrounding room were fairly well developed before that element was added. 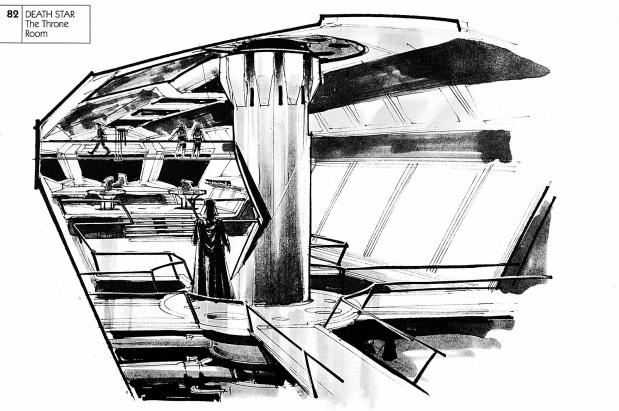 However, McQuarrie did also contribute to the design process, as did Reynolds (production designer); I particularly like this unused throne/throne room design by Reynolds, with the twisting walkways. 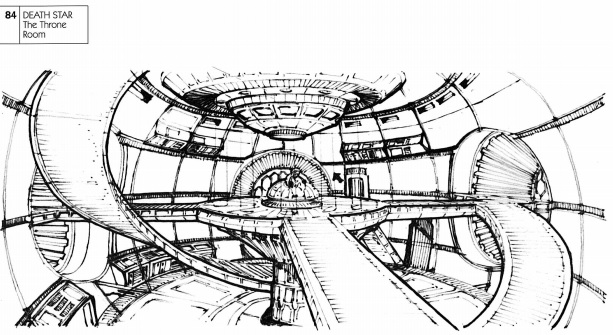 (A scanned PDF of the Sketchbook can be found online, but I'm not going to link to it. I actually own a physical copy of the book from 1983, and it's a wonderful resource.)

The fellow you're looking for is most likely Norman Reynolds. According to the linked article, he designed the film's overall aesthetic.

Another possibility is Bill Hargreaves, who was the supervising propmaker. 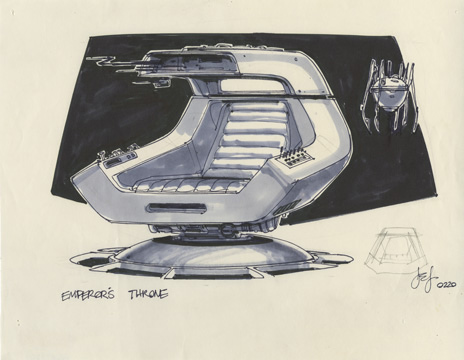 A quick sketch of the Emperor’s chair on the same page elicited a signed response from Lucas: “I like this.” Johnston followed up with a more detailed study (ABOVE, ), without a footrest.

Share
Improve this answer
edited Mar 18, 2021 at 22:10
answered Mar 15, 2021 at 20:17
user137875user137875
1
Add a comment  |
Highly active question. Earn 10 reputation (not counting the association bonus) in order to answer this question. The reputation requirement helps protect this question from spam and non-answer activity.

Not the answer you're looking for? Browse other questions tagged star-wars return-of-the-jedi props or ask your own question.

61
Why didn't Luke become disfigured when he was electrocuted by the Emperor?
10
Why were there THREE actors for Nien Nunb? (Lando's Sullustese co-pilot in ROTJ)
64
Why was there a pit in the Emperor's chamber on Death Star?
8
Why didn't Vader save Luke this easier way in Return Of The Jedi?
3
Why was Palpatine concerned about hiding his powers?
3
Did Disney address whether they will release "Making of" book of Episode VII?
29
What's the story behind the fallen statue on Jedha?
5
What were the job parameters for the original Revenge of the Jedi poster?