Superman comic book with an alien villain who was frozen and dumped in deep space, rather than being executed

I just remembered a Superman comic book that I read, which seemed apropos to a conversation I was having about alternatives to capital punishment. So now I would like to find that issue again.

Unfortunately, all I really remember is an alien supervillain explaining how he came to be on Earth. He had committed egregious crimes on his home planet, but they had abolished capital punishment. So, rather than executing him, he had been frozen in a block of ice and dumped in deep space. However, by some unfortunate coincidence he had ended up on Earth and was causing trouble there.

The supervillain was not one that I think I had ever heard of before (or since). I vaguely remember him looking like a pale-skinned and bearded human male, wearing an "alien" outfit that (as best I remember it) was white and red/pink—somewhat like the appearance of the Silver Age Cosmic Boy. He might have had a helmet. Unfortunately, I don't remember anything about his abilities or what he actually did on Earth, apart from explaining his origins.

The story probably came from my brother's collection of vintage comic books, which were mostly from the 1960s, 1970s, and early 1980s. He was a big Superman fan, but it could have been any Superman-related title (including ones featuring Superboy or the Legion of Super-Heroes). It is also conceivable that a different superhero was involved, but I think that is pretty unlikely.

The Legion then get a distress call from Ice City in Antarctica, claiming that an alien is attacking the city. Invisible Kid sends Chameleon Boy, Shrinking Violet and Colossal Boy to check it out. As they are leaving Insect Queen asks Dream Girl if she can see disaster in their future. Dream Girl confirms this and warns Lana not to use her powers to turn into a moth as it will doom the group if she does. Convincing Superboy of the danger the two rush to Ice City, there they and the other Legion members are contacted by the alien villain, a being known as Oggar-Kon. Oggar-Kon tells them that he was a powerful criminal with mind-over-matter powers and was frozen in a chunk of ice and jettisoned into space. However a comet would strike his frozen form sending him to Earth, and freeing him from his imprisonment, and is now seeking to take over the Earth. 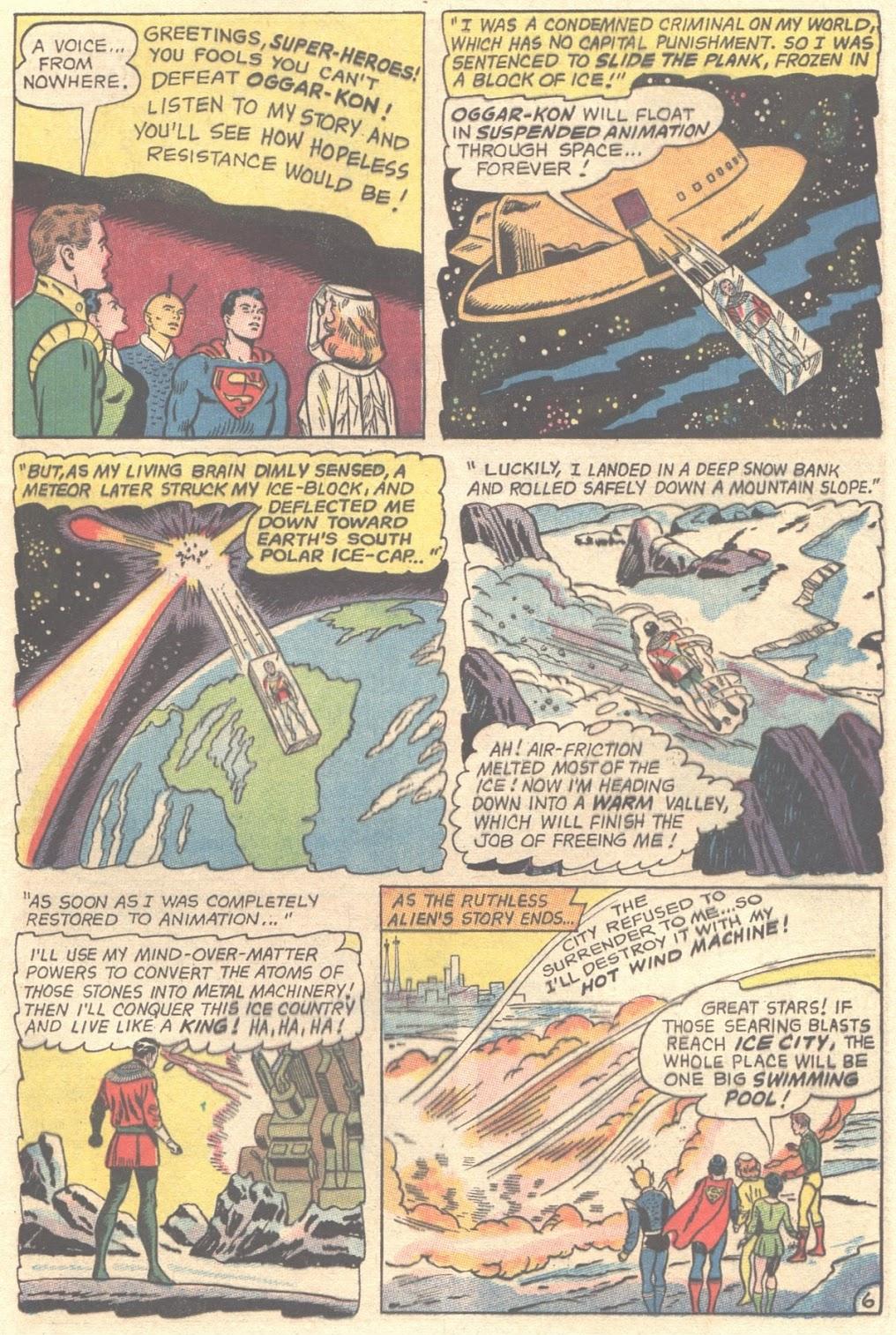 11
1980s or late 70s comic featuring a space ark with humanity frozen on board and a romance?
10
Who is the first villain to use kryptonite against Superman and how did they know it was his one weakness?
6
Title of a comic read in late 80s featuring an ant-like insect alien race with wasp-like spaceships
3
Identifying a Superman Elseworlds comic where the Kyptonians take over Earth
8
70s-80s DC comic in which a demon devours a man in a Superman costume
5
Late 50s comic: Lonely or Lost Planet; Earth is under occupation by green aliens wearing menacing helmets
7
Superman comic where he fights a progressively stronger alien creature
7
Short "Star Wars" comic where Luke and Leia encounter an alien in deep space, who defeats a Star Destoyer with antimatter blobs