I started a book where the main character was a young female human (school age) slightly modified to survive on a planet with only slightly more gravity than Earth. There is a non-modified boy that was born on planet as well.

She explores the jungle world with a vibrating machete and fights a deadly beast, saving a native that I think no one knew existed on the planet.

Might this be The Keeper of the Isis Light (1980) by by Monica Hughes? 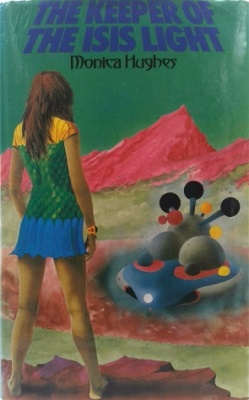 Olwen is a young human woman living on the planet Isis as the keeper of the Light (a navigation beacon). Her parents having died, her only companion is a robotic DaCoP (Data Collector and Processor), called Guardian. On Olwen's 16th birthday (10th on Isis), the Guardian tells her that settlers are coming from Earth to Cascade Valley. Olwen is in distress thinking that these settlers will ruin her perfect world.

Guardian explains that she must wear a special protective suit to protect her from the viruses and bacteria the settlers might be carrying. One of the younger settlers, Mark London, falls in love with Olwen, and Olwen wishes Guardian to allow her to see Mark without her suit. Guardian refuses.

One day, Mark overhears Guardian discussing some of Olwen's blood samples with Dr. MacDonald and he thinks Olwen might be in trouble so he climbs up towards her house. When he sees Olwen, he suffers an accident and falls from the top of Lighthouse Mesa. This turns out to be because of his shock at Olwen's appearance under the suit.

Later, Guardian tells Olwen the truth about the death of her parents, and his subsequent care of her as her mother wished. To keep Olwen safe, he changed her genetically, so the ultraviolet rays from Isis' sun, Ra, would not harm her, allowing her to climb to Isis' mountain heights. Shocked at the realization that Mark fell because of her, Olwen tries to enjoy playing with her favourite pet, a dragon-like native animal called Hobbit, when Hobbit is shot by hunting settlers. In rage, Olwen chases the Hunters back to the village. When the settlers see Olwen, they are disgusted by her appearance. Olwen refuses to wear the suit and vows to never go down into Cascade Valley again.

During a sudden solar storm, Olwen rescues a young settler boy, Jody, who was outside in the midst of the storm. The settlers do not know how to react to Olwen saving Jody.

The story ends with Olwen deciding to leave Cascade Valley, and live in isolation with Guardian.

Not the answer you're looking for? Browse other questions tagged story-identification books young-adult space-colonization or ask your own question.

12
Young adult novel about time travel
10
A book about young adults kidnapped and sent to a harsh planet to colonize it?
12
Book Identification: young adult sci-fi with a Christian slant/influence 90s/80s novel part of a series
7
Young Adult Sci-fi book about cyber-terrorists
10
Animated show with character who has a stone that summons creatures
4
YA book series about a teenage dragon