This was a paperback book in a medieval fantasy style setting. I don't remember the publish year, but the book was read in the early 00's. The story did seem more recent as far as writing goes, so I suspect it was written no earlier than the late 80s, though I don't trust my instincts in that aspect. There were four protagonists: two elves, female and male, whom knew each other but didn't seem to be involved; and two hobbit/dwarf like people, male and female, who were in love. They were also described to be more child-like in appearance. I will call the latter dwarves moving forward.

The male elf's preferred weapon was a sword if memory serves, and I distinctly remember the female dwarf using throwing knives and a set of bandoliers. During part of the story they are celebrating a natural event (I want to say something like a solstice), and drank crystal clear water as part of the celebration.

I recall the story focusing on the dwarves lives while they were young at some point in the beginning. The story was also notable because at least one, if not both, of the dwarves died at the end.

I don't remember if it was part of a series. My memory leads me to believe this was a one-off story, but I don't trust my memory in this aspect.

It has been recommended that it might be in the Dragonlance world, since the dwarves sound suspiciously like kender. Unfortunately, I can't say for certain if that's the case. The dwarves definitely didn't seem as how the kender are described to behave, but that could also be failing memory.

Another recommendation was that it might be related to The Halfblood Chronicles but the summaries I can find don't seem to fit. For instance, I don't remember a theme of slavery.

I'm hoping I can find the book/series and re-read them, along with passing them on to my children.

I suggested that this reminded me of the Warrows in Dennis McKiernan's Mithgar books. The OP responded that this was indeed the case and, specifically, it was Eye of the Hunter.

A thousand years had passed since the Eye of the Hunter last glared in the heavens. A thousand years since the immortal Elfess Riatha brought word of the prophecy to the Warrows Tomlin and Petal with whom she had leagued to hunt down and defeat Baron Stoke, one of the most evil beings to ever stalk the lands of Mithgar. The price of Stoke's doom had been a beloved companion's life, the two plunging, locked in combat, down an icy chasm which had sealed shut the ring of eternity. Now the comet known as the Eye of the Hunter again rode Mithgar's skies, and the creatures of darkness once again ravaged the lands, heralding the imminent return of their dread master, Baron Stoke. And now five brave souls must answer the call of prophecy: Riatha and the Elf called Aravan; Gwylly and Faeril, last in a long line of Firstborn Warrow descendants of Tomlin and Petal; and one other, one restored to them from Death's chill grasp... 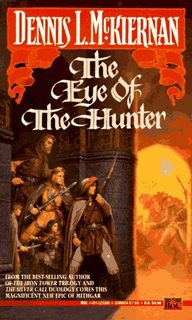 The book is a stand-alone within the greater series.

The series has an interesting origin explained in McKiernan's biography.

17
Looking for a fantasy series with ferrets, elves and a foul mouthed dwarf
7
Trying to remember a Fantasy book/short story I read about powerful maybe enslaved humans with 6 fingers
9
Old book with Sci-Fi/Fantasy mix with four Irish relics (stone, cauldron, spear and sword)
18
Book with travellers, alien artefacts and age reversal
15
Book with a cat who reveals to his reporter owner that cats can talk
9
Fantasy book series about persecuted people with elemental magic powers
8
Book with man and female AI, possibly in space