I recall a short lived TV show that I think was broadcast on the British TV channel ITV in the late 90s or early 2000s and it was about time travel. It was set in Britain in relatively modern times.

The scene that really sticks in my head is when the protagonist goes to use their time travelling machine they go in to a room where the machine is and they close all the windows. The windows have latches on them and by closing the window it creates a circuit. By closing all the latches the circuit is complete and the machine is able to be activated.

I don't know if it's much to go on, but it's been really bugging me for ages.

This sounds like the BBC show Crime Traveller (1997), which had a detective use a colleague's time machine to solve crimes. (Which means that both the starting point and the time-travel occurred in contemporary settings.)

Jeff Slade is a detective with the CID department of the local police force led by Kate Grisham; although unusually for such a position he is an armed officer, carrying a handgun as routine. Slade is a good detective who gets results although his approach is somewhat maverick and his methods do leave a lot to be desired and have more than once landed him in trouble. Amongst Slade's colleagues at the department is science officer Holly Turner who has a secret that Slade manages to uncover. Holly owns a working time machine that was built by her late father. The machine is able to take Slade and Holly back far enough in time to witness a crime as it happens and discover who committed it. As a result, Slade's track record with crime solving goes through the roof with case after case being solved in record time.

You can see the wired shutters being closed and the circuit engaging here: (Click images for larger versions) 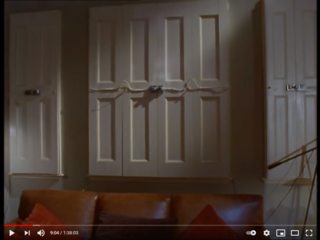 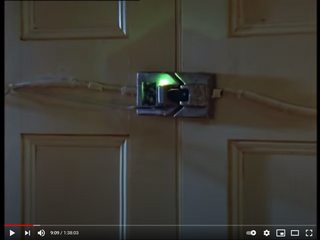 The time machine is a bit of a mess: 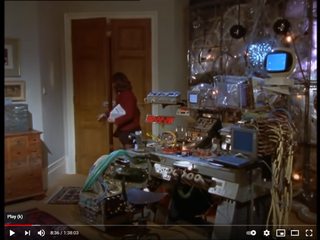 The first 2 episodes are currently available on YouTube (at least for me):

4
TV Detective who travels back in time to solve crime
5
90s or earlier TV series, man and woman with a time machine, liquid crystal

5
Children's book about a girl maybe being influenced by her black cat to become a witch
11
Identification of mid-80s time travel tv show
7
Creepy children's book where a homunculus was made
6
90s (or earlier) British TV show about school boy who discovers alien ship
7
British kids's movie or TV show, teleporting into Tower of London
18
TV identification: Short-lived TV show about a time traveller with a super-computer disguised as a credit-card
10
Crazy British Femizon TV show/movie - 1970s
4
Identification of a show episode about time stopping
13
British Kids TV show involving collecting pieces of a MacGuffin over a series