This is a short story or novelette I likely read in the early 1990s, probably in a magazine or anthology.

The story starts with a woman spaceship pilot, whose name may be "Gemma" or something like that, arriving at a base or colony. The pilot has a mind-computer interface jack in the back of her head, and for some unexplained reason is an empath. I believe it takes place on another planet, because I remember there being something about the oppressed workers needing to pay for air.

She meets some of the workers, who are probably mostly miners, in a bar and learns that the evil company they work for had taken some of their kids hostage. I think this was because the company wanted to trap the workers in their jobs; they had been setting up to go off on their own, or something like that. If I'm remembering correctly, the miners had staked a couple of their own to go prospecting, and they might have found enough that the company wanted to steal it. I recall they might have referred to the company as "All mine" as a joke on its name (maybe "Allied Mining" or "Allied Minerals?") and the way it behaved.

The pilot isn't one of the workers, but her empathy compels her to help them, and her neural link becomes plot-relevant when it's the only way for the workers to chase down the company ship that's taking their kids away. The link may also become a wedge between her and the bartender in a romantic subplot?

The viewpoint character might actually have been the bartender, not the pilot, since I don't recall any of her internal monologue, and I seem to remember the story opening with an "Oh god, what's she doing here, she's going to get killed." thought when she first walks into the bar. But the pilot (because empathy?) walks directly to the meanest, and most hurting, patron and completely emotionally disarms her? him? and so saves herself from getting beat up.

I really want to say the bartender's name was "Crazy Eddie" but I'm a bit concerned that's a conflation with Niven. If that's correct, though, his bar might have been called "Crazy Eddie's Kingdom."

Based on recognizing the cover art of the February 1987 issue of Analog, this is the cover story "In the Kingdom at Morning" by Stephen L. Burns. Many thanks to user14111 for tracking down this issue once I made the tentative identification.

I have a few of the details wrong; the pilot's name was "Gemyn" and "Crazy Eddie's Kingdom" was the Jupiter-orbiting habitat the story takes place on. The bartender, Crazy Eddie King, is the narrator of the story and the owner of the habitat (and the bar).

The joke about the company is approximately "Allied Mining named themselves 'AllMine' because they thought it all was anyway."

AllMine has a near monopoly in Jovian orbit, and the miners are trying to set themselves up in competition near Saturn. AllMine sends one of their factory ships to Saturn to take over, so Crazy Eddie (with Gemyn flying) takes his entire habitat out there so the miners have a chance to be free. 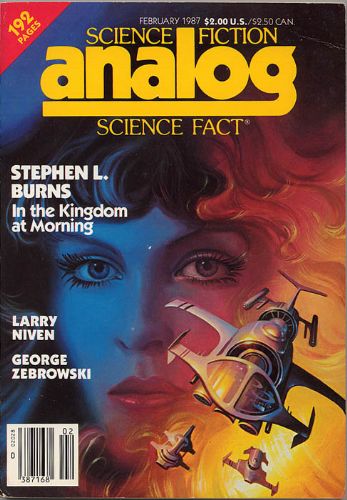 I was looking at Analog covers because I noticed that the cover art for the collection Cascade Point was for a story not in the collection. Which lead me to the original publication cover for "Cascade Point" in Analog; that made me realize how many cover stories I could name from the thumbnails of the cover art, and I was browsing them when I stumbled on this cover.

5
Woman falls in love with alien who helps her fight the invasion
5
3D animated show with a magic wristwatch that spawns lamp posts
10
Science fiction book series about aliens that look exactly like humans, protagonist tries to rescue her brother from a government camp ran by aliens
12
80s (or earlier) sci fi novel: blind tribe in giant caverns who hunt alien bats for immortality drugs
8
Book Search: Kids who perform space-jumps with their minds
5
Novel about a trio of children with strange powers who team up to get rid of a strict nanny
6
Book where a boy moves to a town where only young kids are superheroes
6
Novel about a family of psychics involving a longterm plan by the precog to ensure their survival