Is Sesame Street canonical to The Muppet Show?

This question came out of my previous question Are Sesame Street Muppets human? and how it raised questions about the exact canon under discussion.

When I was a child, I always assumed it was obvious that Sesame Street and The Muppet Show took place in the same universe. Sesame Street Muppets such as Cookie Monster semi-frequently guest-starred on The Muppet Show, and Kermit the Frog was a main character in both shows.

Has the canonicity of Sesame Street and The Muppet Show with each other ever been officially addressed? That is, do they canonically take place in the same universe, or do they simply take place in similar universes that might or might not differ in specific details (e.g. maybe Mr. Hooper either never existed or is still alive in the Muppet Show universe)?

The Muppets does not have canon or a "universe"

The question here applies the wrong frame of thinking. These are not shows, or movies, that are interested in creating coherent, ongoing, "universes" that the action takes place in. They are sets of characters that are deployed into various different settings as the makers choose to make entertaining stories thus the characters move in time (compare "Muppets in Spaaaaace" with "Muppet's Treasure Island" for example) and can freely crossover without creating a canonical same universe.

In a word, Yes. In the film A Muppet Family Christmas (1987) the Muppets (consisting of Kermit, Fozzie, Gonzo, Animal, etc) go on a road trip that encompasses a trip to Sesame Street, where they meet the Sesame Street gang including Big Bird and Cookie Monster, and a side-trip where Kermit and Miss Piggie travel into Fraggle Rock and meets a variety of Fraggles including Sprocket and Doc.

Sesame Street and The Muppet Show characters interact as such

There were several episodes of The Muppet Show where Sesame Street muppets came and joined the production. Let's revisit some highlights from these shows:

From the second episode of Season 1, comes Ernie & Bert in a bit with Connie Stevens (Bert sings "Some Enchanted Evening"):

Here is one from Season 3 with a backstage scene with Big Bird and Miss Piggy. In this scene Big Bird mentions that Kermit and he both "come from the same neighborhood: Sesame Street."

And here is one from Season 5, where many Sesame Street muppets join in the closing finale:


Moreover, a few of the characters from The Muppet Show appear or were represented on Sesame Street. Here are a few examples:

Of course, Kermit the Frog was frequently on Sesame Street during the first decade. Here he is in one of the many Sesame Street News sketches:

Rowlf the Dog has a cameo in "The Song of Nine" at about the 50 second mark:

Miss Piggy does not appear 'live' on Sesame Street but her portrait appears in a few episodes, such as this one: 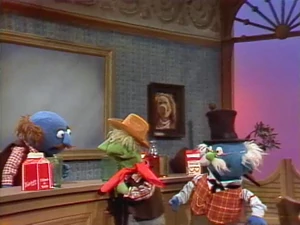 Not the answer you're looking for? Browse other questions tagged canon muppets sesame-street the-muppet-show or ask your own question.

4
Was the episode "The Doctor's Wife" (S06E04) canonical?
9
What printed materials from Avatar: The Last Airbender are canonical?
6
Is Star Trek Continues considered canonical?
5
Is "Fear the Walking Dead" canonical?
10
Why not credit Kenny Baker as R2-D2 on The Muppet Show?
13
Is there an official Street Fighter canon?
7
Has C-3PO ever sung a song in canon, like he did on Sesame Street?
33
Are Sesame Street Muppets human?