Manga where the main character gets frozen for years and then thaws out when he finally absorbs the nucleus of the ice queen. Then he goes into a gate that is called the novice something to level up, and he finds a bow from one of the skeletons, and finds out that his group was betrayed, then then he clears the gate. That's all that I can remember.

Pretty sure this is Return of the Frozen Player. 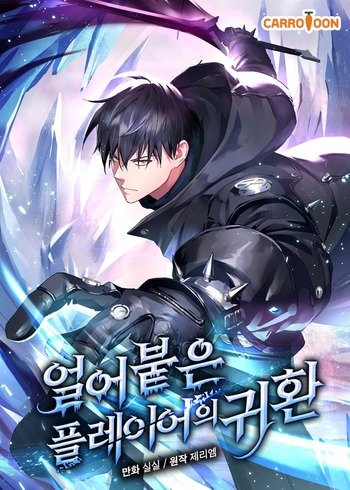 5 years after the world changed, the final boss appeared. [The final boss for area Earth, the Frost Queen, has appeared.] The final boss! If we can just defeat her, our lives will go back to normal! The top five players in the world, including Specter Seo Jun-ho, finally defeated the Frost Queen... But they fell into a deep slumber. 25 years passed. "A second floor? It didn't end when the Frost Queen died? Specter awakes from his slumber.

This is a manhua (Korean comic) which is set in a world resembling a contemporary or mildy-futuristic massively multiplayer online role-playing game. The main character, Specter, was originally part a group called the Nest Attack Team, comprised of the five strongest players in the world.

They went to Antarctica to confront the Frost Queen, whose existence threatened the entire planet, but discovered that only one player could enter her nest, leaving the rest of the team to wait outside. Since Specter was the strongest against ice-based abilities, the team agreed that he should be the one to confront the Frost Queen. He did so, and defeated her, clearing her nest, but was informed by a disembodied voice that his body would go into hibernation until he'd fully absorbed her nucleus.

25 years later, he finishes absorbing the nucleus, and breaks free from the ice he was frozen in. He then learns that the rest of his team are still frozen, and that while he now has the Frost(Ex) skill required to free them, he cannot yet do so as his stats have reverted to Level 1. He also learns that the game isn't over, as he thought it would be with the Frost Queen defeated. More floors have opened up, and humanity has made very little progress toward clearing them in his absence, since the Frost Queen's nucleus is required to progress beyond the second floor, a volcanic region. He decides that the only way to increase his stats enough to free his friends is to become a player again and clear the remaining floors of the game.

In preparing to reenter the game, he equips himself with various weapons, including a bow and arrows. He also opts to tackle an uncleared gate known as the Novice's Grave, to gain experience and boost his stamina. The gate is only accessible to Level 1 players, and one must survive until dawn in a graveyard filled with zombies in order to clear it. There's a trick to this gate however: the final zombie hides within a coffin and attempts to deceive players into thinking it's a living person trapped within the gate, so that it can catch them off-guard. Specter doesn't fall for this trick and kills the last zombie, clearing the gate.

5 years after the world changed, the final boss appeared. B [The final boss for area Earth, the Frost Queen, has appeared.] The final boss! If we can just defeat her, our lives will go back to normal!
The top five players in the world, including Specter Seo Jun-ho, finally defeated the Frost Queen….
But they fell into a deep slumber.
25 years passed.
“A second floor? It didn’t end when the Frost Queen died?
Specter awakes from his slumber.

From one of the chapters:

He’d acquired the skill from the Frost Queen’s nucleus.

There is a comic, but I haven't found a non-copyright-infringing site. Found with a search for "nucleus of the ice queen" because that seemed like a nicely unique term.