Looking for a 90s or 80s movie where 2 boys sneak out to go investigate the neighbor's house and they find a dungeon-like place in the basement. The neighbor may have been a vampire, I don't quite remember. The mom goes to save them. All I remember is the mom had very blonde hair in a pixie cut, and she had very bright blue eyes. I know it's not Fright Night or The People Under the Stairs. I don't think it's a very popular movie.

This is a bit of a long shot as it is actually a fairly popular cult classic film. But could this be the 1987 film The Lost Boys?

Dianne Weist played the mom Lucy and had a pixie cut as in the following pic: 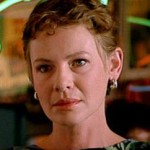 You can also see her in this clip on Youtube:

I don't recall a dungeon per se. But there were definitely vampires, young teen boys sneaking around and it was during the timeframe you mentioned.