1970s or '80s movie where a family farm is relocated either in time, or to an alternate reality

A family is living in a ranch or farm type setting. The house (2 story?) and barn (horse stable?) were good condition, as opposed to run down or old.

Something small (maybe the size of a tennis ball) lands on the farm, (meteoroid? part of a spaceship?). I recall one of the children (boy?) finding it and bringing it in his bedroom. After he leaves the bedroom it starts glowing, or rainbow flashing lights start coming out of it, and something happens. It either opens up a portal to an alternate reality or to a different time. If I recall correctly. the whole farm gets relocated, house and barn.

When this happens there is no power, phones are not working, no stations on the battery operated radios, and they are trying to figure out what could knock out all three.

At one point, I think a large lizard man type creature enters the barn (probably a stop-motion creature, as opposed to a lame looking man in a suit) and everyone rushes to the barn to save the horses/kill it.

The family, I believe, were a father, mother, and 2(3?) kids. But I think the kids were teens as opposed to small children. Pretty sure the father was grey/silver haired. (For many years I thought it was Peter Graves of the Mission Impossible TV show, but I don't see a matching movie in IMDB). There may also be a farm hand (or boyfriend of the older daughter?).

The portal might have opened/moved them a couple times, I am not sure.

I THINK the movie ends with the family realizing they are stuck (in the past or primitive alternate reality), and they get on the horses and ride off to explore the strange new world they are living in. 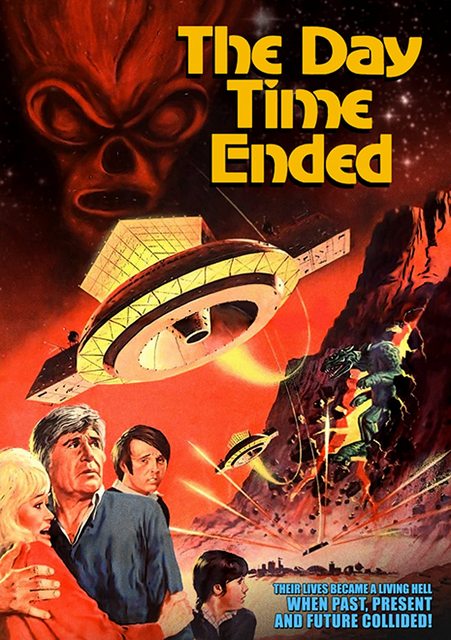 A small family relocates to the Sonoran Desert to be closer to the grandparents of the family. Though there are news reports of a spectacular triple supernova and the young granddaughter has seen a glowing alien construction behind the barn, the family is at ease until, one night, a UFO soars overhead and appears to land in the nearby hills. Apparently, the triple supernova has opened a rift in space and time. The family finds that their electrical appliances no longer function, and the youngest daughter of the family has a telepathic encounter with an extraterrestrial. The grandmother, too, sees one of these diminutive creatures beckoning to her, but it soon vanishes.

The grandfather, while trying to start the car, sees that a strange animal is approaching from the distance. The grandfather goes back inside and informs the family that something is coming; before long, a variety of horrific, alien monsters (all of these creatures being of a reptilian or amphibious nature) are proceeding to slaughter each other outside the house; some are trying to break in and kill the family. After a few moments, the UFO appears again and teleports the creatures to a different place. The family take this opportunity to escape to the barn. The family become separated from one another and each hides until sunrise, where they find that they have been launched thousands of years into the future. They meet up with the daughter, who had become separated from the family during one of the time-warp events. She tells them that everything is going to be fine now. After walking across the desert, they finally see a domed city in the distance, and decide to seek refuge there. The grandfather proclaims that there must be a purpose to all of this. The family walks towards the city.

Definitely has a family (with a grey-haired father, somewhat resembling Peter Graves), a house (with a stable and horses) that gets transported through a timewarp, malfunctioning appliances, a stop-motion animated lizard-like monster, and a scene with some of the family members riding on horseback near the end, exploring their new surroundings.

Not the answer you're looking for? Browse other questions tagged story-identification movie aliens time-travel or ask your own question.

7
Movie, Parents House near Desert, Destroyed, Sneak onto Spaceship to Escape
5
80's-90's sci-fi kids movie (possibly a live-action Disney), two alien girls stranded on Earth in a ranch/farm
9
Trying to find a live action movie with CGI monsters
6
Movie Identification - 2000-Current Werewolf
9
Child's science fiction book about kids in space with a metal disk and an alien chasing them after it
8
Series where the planet’s air is really polluted and there is a portal to take you to a world where the air is clean
9
Hindi TV series with angry ghost developing affection for single mother and her kids