1980s TV show or movie where kids intercept alien TV broadcast. Aliens are flat puppets. They see a gameshow and news of an Earth visit by the aliens

I've been looking for whatever this movie or show this was....

This is an OLD memory and I've not been able to find anything anywhere about it. Some of these details might not be 100% accurate. I was scared when I saw it, so I might have imagined details out of fear.

I believe the show was about kids accidentally intercepting an alien TV signal. This happened because of a lightning storm or experiment or accident... something like that...

I feel like they didn't know what they were seeing at first... and had theories about what it was.

The aliens were FLAT looking creepy puppets. Intentionally 2D-ish. Maybe a foam appearance. The kids saw an alien game show in their alien language and then later a news bite or broadcast which depicted some of their kind in astronaut gear visiting Earth. The kids watching were freaked out realizing aliens were coming.

Thanks for reading - if you know what this is you'd be solving a 30+ year mystery for me.

You are probably thinking of the episode "Fine Tuning" of Amazing Stories from 1985. It can be seen at NBC's Web site. The plot summary from IMDB says:

Three high-school kids build an antenna that can catch signals from outer space. They learn that the aliens are big fans of 1950s American television and are coming to Hollywood to meet some of their favorite Earth stars.

The aliens certainly look like unrealistic puppets in the television broadcast, and they could certainly creep one out as a child. 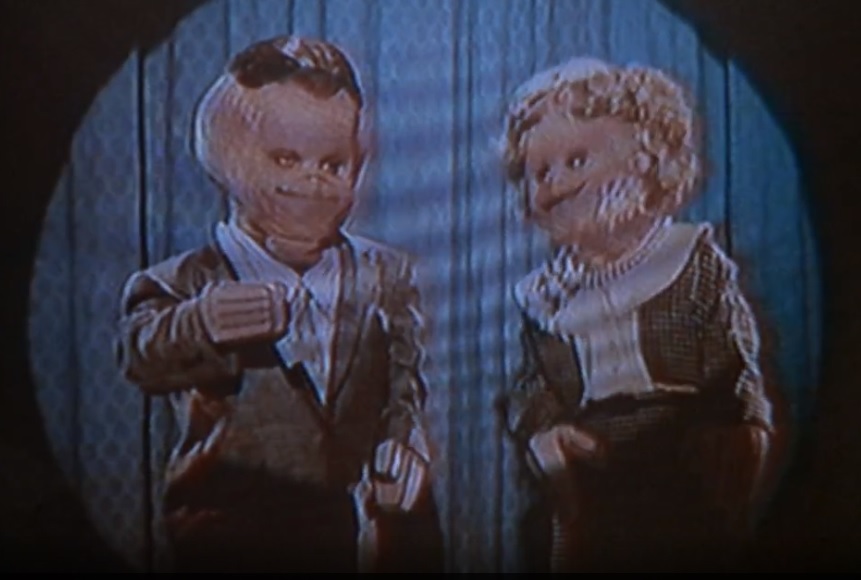 Immediately following this alien recreation of the George and Gracie, there is a news break showing the alien astronauts getting ready to come to Earth.

18
Movie where Earth is conquered and humanity are cavemen slaves
7
TV show I think, where Aliens are leaving Earth, most people on Earth don't know that they are on Earth
4
Goofy looking alien robots lose a "Kleptonite Ball" towed behind their spacecraft
5
Identify this TV show from early 2000s with aliens, implants, and an alien-human hybrid
1
Looking for movie where aliens destroy Earth, with spike like bombs, drilling into the crust
6
I'm looking for a specific cartoon TV show from 00s about kids possibly living in a...quite big house?