Which Green Lantern is seen in the nightmare scene from Zack Snyder's Justice League?

In Zack Snyder's Justice League (2021), when the Justice League are at the Kryptonian ship trying to resurrect Kal-El, Cyborg has some sort of vision/dream of the future:

In this vision, Cyborg sees that

Darkseid has defeated the League and kills Wonder Woman, Aquaman (and also others). Superman is seen floating in the sky with a dead Green Lantern in the foreground (image below): 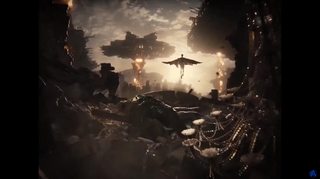 The only GL appearing in the movies was Yalan-Gur, but it couldn't have been him since he died during the first attempted invasion and the vision was about the future. Also, all other human Lanterns (Hal Jordan, John Stewart, Guy Gardner, etc.) can be ruled out since this GL clearly isn't human.

So, which Green Lantern is seen here?

There's no official confirmation, but most sites tend to agree that it's Kilowog.

The below image (taken from cbr.com) has been lightened, and you can see a resemblance. There are differences in skin tone and body build, but the face is pretty spot on. 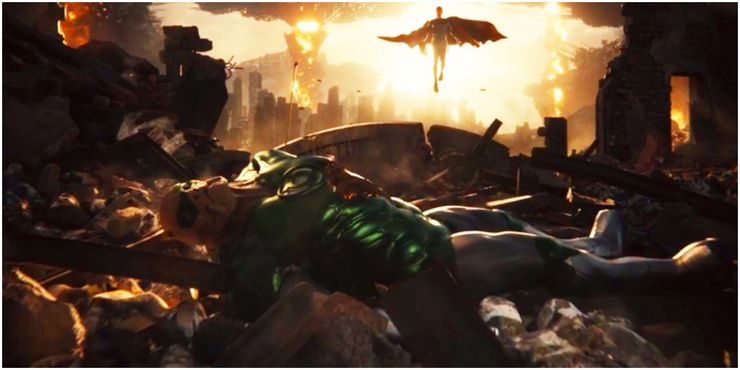 Not the answer you're looking for? Browse other questions tagged dc character-identification dc-extended-universe zack-snyders-justice-league or ask your own question.

16
Why is Hal Jordan Featured in Most Green Lantern Adaptations?
5
How does one become an Honor Guard?
5
Could Green Lantern: The Animated Series be considered part of the DCAU?
6
Where does the new 52 start?
23
What are the Justice League members’ weaknesses?
6
Can a power ring leave a wielder?
9
Did the Justice League poster intentionally use the same style as a graphic novel collection?
4
Which Green Lantern characters appear in war with Darkseid?
2
What parts of Zack Snyder's Justice League were retained from the original?
2
Why did they include the air pocket in Justice League films only?