What are these shadows Black Panther is fighting in this episode of “Avengers: Earth's Mightiest Heroes”?

By the end of the first season of Avengers: Earth's Mightiest Heroes, the heroes got teleported into the other 8 realms (they were on Midgard).

Black Panther was teleported into some kind of dark location with tombs and dead trees. Shortly after, he was pursued by some kind of shadow creatures: 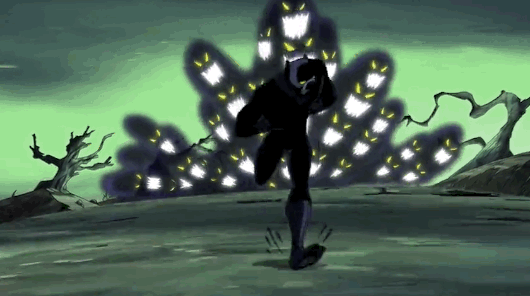 Nothing is said about these creatures nor the location. Who or what were they?

It's a user-edited wiki, but

As Loki had conquered all of the realms except for Midgard, Svartalfheim was among them. In Svartelfheim, Black Panther had been pulled into there and was chased by the Dark Elves' tortured souls after examing the bones of the dead elves. After a long chase, he finally found his way out through the well which leds to Alfheim where he bumped into Hawkeye and Faradei.

Not the answer you're looking for? Browse other questions tagged marvel avengers-earth-mightiest-heroes or ask your own question.