I don't recall a lot about this story, but here are some details. The main character is the son of a lord of some smaller house in a medieval style fantasy setting with magic teleportation circles. His birthday is coming and he's supposed to choose a slave. He's reluctant to do so. He helps out a woman (I think she has red hair) who's running from some people who kidnapped her or are trying to kidnap her. I think she falls off a cliff (deliberately?) escaping and gets injured and has no memory of why she was running or who she actually is. She might be a princess of some usurped kingdom. I'm not sure. Since the MC treats her with respect and is nice to her, she decides to ask him to make her his slave in order to gain his protection, rather than fall into the hands of whoever was chasing her, as they are cruel and he is kind. The MC agrees.

A slave crest appears on her abdomen (?) after the slave ceremony. There is lots of sex and nudity in this manga so it may be a hentai, not sure. The woman becomes sexually aroused, I believe, under the full moon, possibly because of the slave crest. He is forced to satisfy her or some harm will come to her. I think he gains a number of female slaves or allies during the course of the story. Unfortunately for him, the people chasing the woman want her so badly that they're willing to have the MC's entire family exterminated. I think the story turns into a revenge story after the MC catches up with the actual murderer, who turns out to have been coerced by someone else at the pain of having his whole family slaughtered.

I think the story was published some time in the last ten years. That's all I recall about the story. If I remember anything else, I'll update.

Could the one you are looking for is Yahalue(Aharoo)

There is 2 season. The first slave he buy is a princess. She is indeed run away and fall from the cliff => don't remember her identity.

His family is indeed killed near the end of season 2.

Outside of red hair everything you describe is match with Yahalue(Aharoo).

Could this image make you remember anything? (MC and his harem) 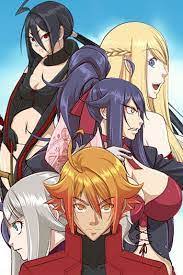 9
Looking for supernatural romance novel about woman at mental institution with mysterious power, has variation of "witch" in title
13
Horror movie about a demon (or telekinetic ?) boy who kills his family members
6
Story about a princess who will become queen in the future, trying to find knights for her knights of the round
3
Manga about a man who learns magic in order to rescue his sister
7
Manga about a guy who was reborn as some noble's daughter
4
Fantasy novel set in an alternative Roman era about a blacksmith's daughter who is sold to a slave trader by her mother
2
What josei manga is this
4
Manga - the weak MC runs away from his lover... he lives in the wild and becomes strong