Why does Tolkien make Thorin to be older than Balin, only to present Balin in the Hobbit as "very old-looking"?

Tolkien characterized Balin in the Hobbit as "very old-looking":

... Instead there was a very old-looking dwarf on the step with a white beard and a scarlet hood; and he too hopped inside as soon as the door was open, just as if he had been invited. “I see they have begun to arrive already,” he said when he caught sight of Dwalin’s green hood hanging up. He hung his red one next to it, and “Balin at your service!” he said with his hand on his breast.
The Hobbit Chapter 1

Readers also found him to be wiser than Thorin:

Balin is portrayed to be the wiser, more social and skeptical individual in Thorin and Company. He is kind, sly and brave, an excellent fighter. Thorin, at one point, quoted on Balin's skill as a fighter. He develops an essentially strong relationship with the other Dwarves he travelled with and was willing to fight alongside them for any cause. He was sympathetic, sometimes cynical, towards Bilbo Baggins, remarking that the latter wasn't fit for the job they had set out to do. He got on brilliantly with Thorin, and seemed to share something of a grandfatherly view of the latter.
LOTR Fandom page on Balin

Balin presented the contract to Bilbo, with Thorin at the head of the table: 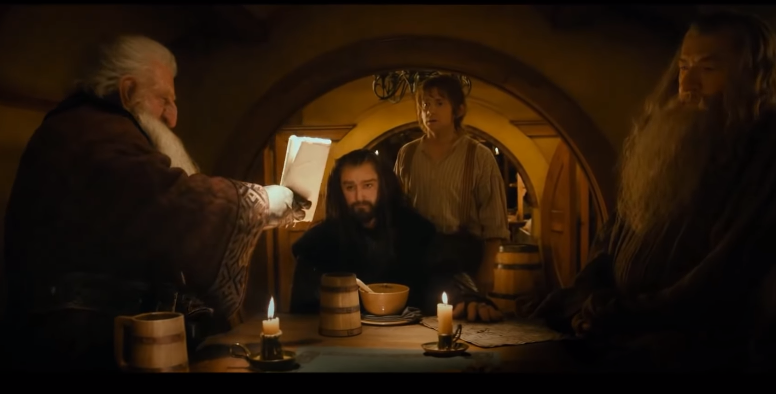 Gandalf explaining the map to Thorin and company: 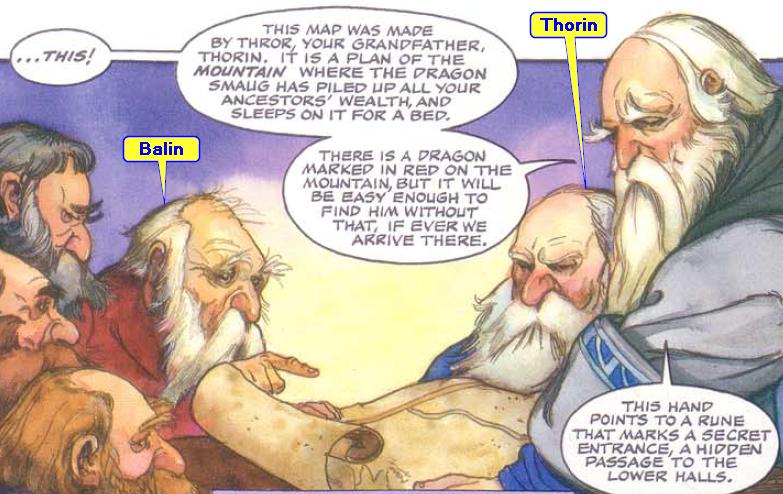 But according to the genealogy in LOTR Appendix A - III (Durin's Folk), Tolkien had Thorin to be born in TA 2746 while Balin to be born in TA 2763, making Thorin to be 17 years older than Balin. In the scene, Thorin would have been 195 years old while Balin would have been 178, both were in the same age bracket considering the usual lifespan of dwarves is 250.

The question: Why does Tolkien make Thorin to be older and contemporaneous with Balin, only to present Balin in the Hobbit as "very old-looking"?

This a compilation answer of all the comments above with a few of my own thoughts.

Instead, it was a very old-looking Dwarf on the step with a white beard and a scarlet hood... And "Balin at your service!" he said with a hand on his breast.

Balin, while technically being younger than Thorin, Balin was portrayed in the movie with shock white hair because he was described as being "very old-looking" and had a "white beard". Balin was born in TA 2763. Thorin was born in TA 2746, making him only 17 years older than Balin (a miniscule difference in terms of Dwarf-years). As @JohnHunt stated, Thorin was never described as being "very old-looking", neither did it mention nor allude to his having a "white beard", only saying:

Thorin indeed was very haughty, and said nothing about service...

But it only takes into account how he looked as a result of being smashed by fat Bombur, while not really describing his appearance, other than saying he was enormously important.

Second, an interview that took place between the actor who portrayed Thorin in the The Hobbit Trilogy, Richard Armitage, and Steve Weintraub, explains much of how they got Thorin to look and act younger:

Richard Armitage: ...Thorin calls Gandalf "Master Wizard"... He uses a term which suggests that Thorin's even older than Gandalf. We played around with making him move much more slowly and speak differently. But actually, if you want that kind of character, then you cast an older man. But... I needed him to be heroic on the battlefield and somebody that still has a potential to rise to that state of brilliance on a battlefield. He's like a flame that's fluttering, and has nearly been extinguished, but it has the potential to re-ignite. It's like a dying flame when you first meet him, but he still has to be a flame. It's something I've struggled with in creating the role, but then you get on with it.

As you can see, the producers and Armitage were originally planning on making him an older Dwarf. However, they settled on a younger, more heroic figure for Thorin, someone who can capture the spirit of the King Under the Mountain, rather than casting a second Balin.

14
Why does Bilbo change?
1
Why does the company of dwarves believe in Oakenshield's leadership so blindly?
12
Timeline of Peter Jackson's Tolkien movies
3
Was there a symbolic reason for Thorin losing his shield in The Hobbit, The Unexpected Journey?
35
How many dwarves of Thorin's ex company were alive during The War of Ring?
7
How did the Great Goblin recognise Thorin?
3
How did non Durin end up in the company of Thorin II Oakenshield
11
Thorin's imprisonment "set right"