1990s softcore sci-fi movie with a female cop that turns into a nymphomaniac, and Adam and Eve (or something like that) appearing near the end

1990s softcore flick. This female cop turns into a nymphomaniac that screws any stranger she sees after being infected by some kind of extraterrestrial virus or influence or possession or something. At one point a busboy comes into the place and he says “I’m just a busboy” to which she replies “You look more like a big boy to me.”

Also at the end of the movie Adam and Eve are seen, or maybe something like that. I believe the movie also featured some guy getting raped by his mother because she needed to be impregnated by him for some reason, and the guy says at one point when she is screwing him and he is trying to not splooge, “Stop, I can’t hold it anymore.”

johnboy803johnboy803
3711 bronze badge
New contributor
johnboy803 is a new contributor to this site. Take care in asking for clarification, commenting, and answering. Check out our Code of Conduct.
3
Add a comment  |

Two answers deleted for abusive language seem to nonetheless have gotten the answer correct. Sex Files: Alien Erotica matches on most of the provided points. 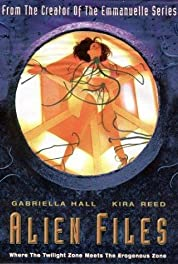 The cast page mentions an Adam, an Eve and a busboy.

3
Which (possibly French) sci-fi movie features a remote control that turns a basement door into a door to another world?
8
Which movie/TV show has an evil cyborg harvesting eyes from androids in a hidden town?
5
Science-Fiction Book Series, with name similar to “Dunhau Chronicles”
18
Movie where a bereaved woman raises an angel to help her cross over
1
Movie with dragon and thing that looks like Godzilla
6
Japanese animated movie where a plague that turns people into stone spreads across the Earth
13
Movie with cyberpunk-like villain set in jungle
8
Girl that unwillingly becomes a cyborg during a rainy night
6
Alien movie about black stones biting people