Where was the attacking boat?

In Return Of The Jedi, during the battle over the Sarlacc, Luke is fighting some goons with his lightsaber on the sail barge or another skiff (I can't remember). Boba Fett is standing on a skiff aiming his wrist-mounted rocket launcher at Luke and Han Solo is lying unconscious behind him. Han Solo yells

and gets up while holding a plank and accidentally hits Boba Fett, turning on his jetpack, which throws him in the pit, incapacitating him.

Where was this attacking skiff and who informed him of it? It is kind of weird that he said that even though no skiff attacked Han Solo's skiff.

Han is saying "Boba Fett? Boba Fett, where?" He's responding to Chewbacca, who's presumably saying "watch out, it's Boba Fett!" 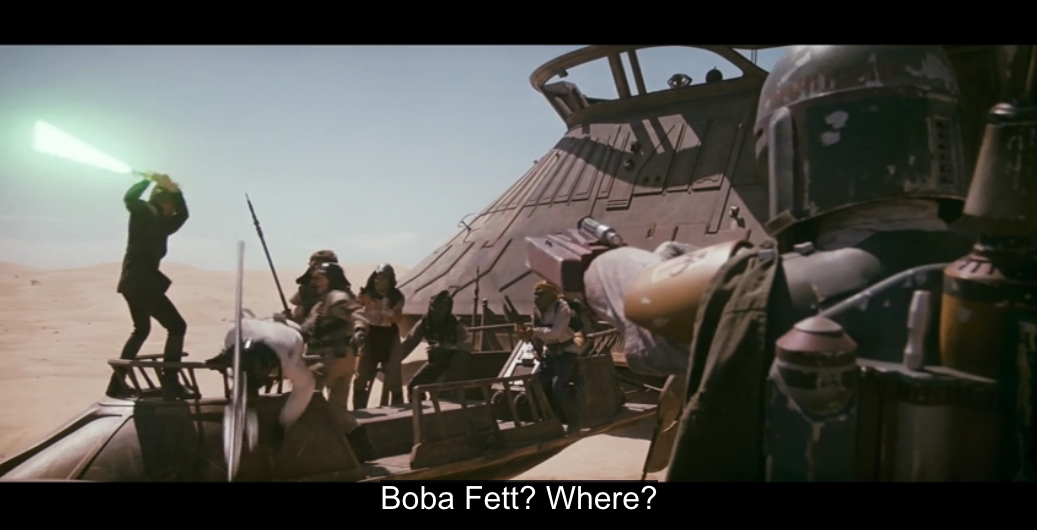 11
Was Luke feigning helplessness in Return of the Jedi?
25
Why was Boba Fett still hanging around with Jabba?
49
What type of Captain is Han Solo?
12
How did the Rebels know the shield was down?
28
Why and how were Luke Skywalker's hands freed before he went into the Pit of Carkoon at the Dune Sea in ROTJ?
13
So is Slave I (Boba Fett's ship) just sitting there, abandoned, near Jabba's Palace?
0
Why wasn't the Galactic Empire aware the shuttle Tydirium was captured by rebels?
7
Why was a 2-1B droid attending the war meeting where Mon Mothma addresses the Rebel forces?
11
What is the timeline of the rescue of Han Solo?