In the Halo universe, what would be the effect of a MAC round hitting a planet?

In the Halo games and books, Human forces use a MAC (Magnetic Accelerator Cannon) to defend itself against enemy forces. They work on the principle of using magnetic fields to accelerate a large, heavy metal shell into a taget very quickly, destroying it.

In a Halo: Reach mission (Sword Base), you see a Covenant Corvette being destroyed when a round is fired from orbit and passes straight through the ship. Cutscene can be found here under "Sword Base - Closing". Also, in "Tip of the spear" a human ship uses a MAC to disable a covenant shield generator - this is unsual as one of the characters is heard to say "A MAC round? In Atmosphere?" which suggests this is highly unusual.

What would be the effect of one of these shells "missing" its target and hitting a planet?

This may be more of a question for physics.SE, but here we go anyhow.

Kinetic energy is related to mass and energy by:

This means that the energy increases quadratically with velocity. A 600,000 kilogram projectile moving at 30,000 m/s would have a kinetic energy of 2.7e14 joules, which according to wikipedia would be equivalent to a 64.5 kiloton TNT explosion, or about 4 times the energy of the nuclear weapon that razed Hiroshima.

The second projectile has a very high velocity, approximately 4% of the speed of light. Whilst pretty fast, this is actually not fast enough for relativity to have a substantial impact on the kinetic energy. Thus, solving naively, we obtain an energy of 2.16e20 joules, which is slightly over 1000 times the yield of the Tsar Bomba. The majority of this energy would be released at ground level, as opposed to the Tsar's airburst. If we model this as a nuclear explosion, you're looking at something like (click for an explanation of what the circles indicate): 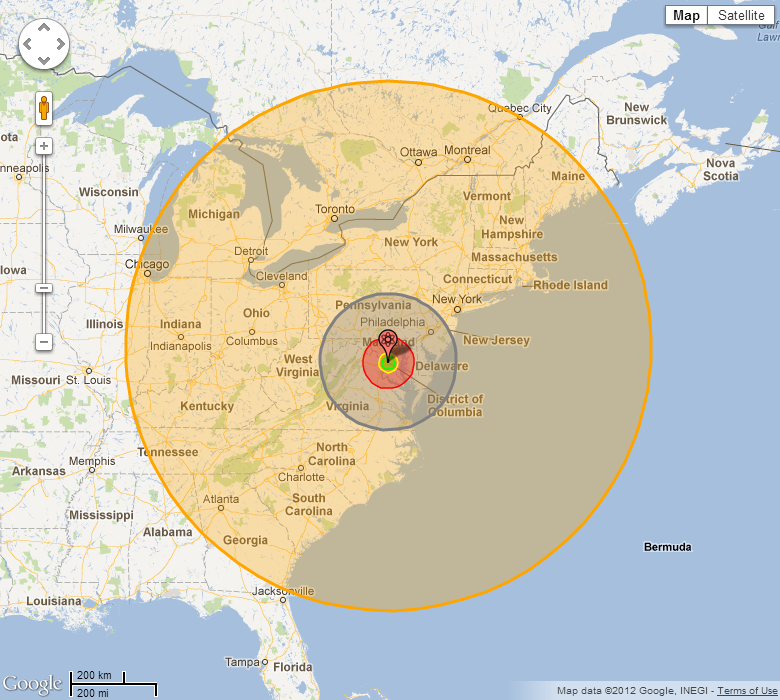 Of course, impactors aren't nukes, and as such the damage will be more characteristic of an asteroid hitting the planet, which means a huge crater, shockwave, firestorm and lots of dust being thrown into the air. However, any way you look at it, anticipate very large scale devastation.

All this raises a very important question: where are they getting the energy to accelerate these projectiles? Two shots of the big cannon would need an energy supply approximately equivalent to the entire energy consumption of the planet in 2008.

It is my understanding that it would have similar effect to detonating a thermonuclear device, without any radiation effect. Obviously the size of the round would determine the blast radius, however there would be some universal effects. There would obviously be an impact point, and a shockwave, but there would also be an electromagnetic pulse created by static friction build up. Warren Ellis proposed a similar weapon in his series Global Frequency using a solid Carbon/Tungsten rod shot from what was essentially a satelite "slingshot" using only mechanical means. A MAC Cannon is essentially a Railgun scaled up.

Let's approach this in a different manner. MAC rounds are essentially rods of metal fired at incredibly high, some would say 'ludicrously high', speeds. When something is moving that fast, it displaces the air in front of it so fast that it leaves a vacuum behind it. As the air rushes in to fill the vacuum, the pressure shock wave can hurt. Quite a bit.

For example, the flechettes (metal darts) used in Apache helicopters can strip muscle from bone just by passing within a few feet from a person. MAC rounds are a couple orders of magnitude larger and faster than fletchettes, so there is a real danger for collateral damage to persons and objects within range of the MAC round's trajectory, without even getting to how devastating it would be to the target vicinity.

Had the dropship (I think they were in a dropship during that cutscene) been anywhere relatively close to the MAC round on its way to the target, it's quite possible they could have been knocked out of the sky by the pressure wave alone.

Physics, relativistic mass of a high speed projectile. A standard frigate fires a 600 ton projectile at 30,000 meters per second or 0.01% the speed of light. Or over 16 Giganewtons of force 466 times the force of a Saturn V rocket thrust during initial launch. It's relativistic kinetic energy of over 244.8 Terajoules of energy or equivalent to a 60 kilton nuclear bomb. To accelerate a projectile that speed of course would require that much energy to accelerate the projectile to begin with. Even with fusion power plants would require consumption nearly a kilogram of deuterium assuming conversion energy efficiency. And an energy storage to hold the energy for one shot (The equivalent of 680,000 Tesla car batteries). A typical MRI uses 2.5 megajoules of energy to generate a mere 1.5 Tesla of magnetic force.....A MAC gun shot would generate up to 97 million Tesla, As much magnetic force as a small neutron star.... the magnetic field would be enough to kill you a million times over....

A Super MAC shot would require 195 Quadrillion joules of energy, or 7,000 kilograms of fusion hydrogen fuel and generate several trillion Tesla of magnetic force to accelerate the round. With an equivalent delivery of 46 Gigatons of TNT or over 900 hydrogen bombs

The above explanation, using the equation provided as well as the nuclear explosion simulation maps model is very accurate and in all honesty one of the best available representations of what a mac round would realistically do to the surrounding landmass. Of course the explanation that it is not a nuclear based weapon and it would act more like a asteroid impact is correct as well. the subsequent dust cloud would have devastating effects on the planet but we also need to look at other possible sources.

Inside the book Onyx, I believe there was a moment in which blue team was assaulting a covenant position, now I don't remember exactly where the mac round they ordered was coming from, whether it was a conventional ship mounted mac gun using a 600 ton tungsten round or if it was a orbital super-mac using a 3000 ton tungsten round. The massive variance between the two ultimately change the probable outcome.

The specifics behind it where that the mac shot would pass through the docked ship and impact the ground, if I remember correctly, and I can always check later and update, or post another post with the specifics, they explained that if the shot was used as is, it would impact the planet and actually preform as a "planet Killer" class weapon, in such as way as to basically destroy the tectonic plates underneath and rendering the planet uninhabitable. I am unsure of this 100% but I remember that being somewhat the case, and that was the reason they used a Shiva Tactical nuke underneath detonated at the right time to act as an opposite force to bleed off the impact forces of the mac round.

Based on a 3000 ton tungsten round impacting the ground your looking at something like what is provided in the post above. regardless of what we're looking at the "airblast" radius provided above is inaccurate due to the fact that it is based off a exploded ordinance at sea level, that isn't in a solid form upon "impact", the actual shell itself impacting into the earth would have devastating consequences on the landmass let alone the uprooted earth being thrown into the air and realistically the odds are high that the world would be faced with a "Nuclear Fallout"/"Iceage" level event killing all life on the planet. if the subsequent tectonic and landmass changes didn't kill you first, the freezing of most if not all of the planet, and the "ash" cloud of earth raining down on you would, realistically, you'd die from suffocation, possibly magma, or as the last thing should you survive those, freezing on a now barren frozen wasteland.

At the end of it all, the mac weapon should be considered a planet killer, and at worst a super weapon of epic proportions, but hey, its a pretty good weapon when killing aliens.