I saw a vampire movie when I was a young kid in the early 90s. I thought the movie was contemporary but it could be older. All I remember is that it had vampires, kids, dreamy window curtains, and a model of the town was featured. I brought this up before and someone suggested Salem's Lot (1979) and the window scene seems familiar, but I really thought it seemed more recent. Any other suggestions? Another vaguer memory involves prison bars or a jail cell. I remember it scared the crap out of me and I may not have even watched the whole movie.

Vampires, kids, and a model of the town seems like Lost Boys to me. Released in 1987, it would have been on TV or pay TV by the early 1990s.

The protagonists are two (I think?) young teen boys; one of the vampires (after a bit) is the big brother of one of the boys. Set in the fictional Santa Carla (California, judging by terrain and climate), the "Lost Boys" of the title are a gang of sorts who go out at night, get into trouble (and get out of it by being vampires -- they can fly, become invisible, etc.). The protagonists, on discovering that the big brother is being turned, set out to stop the process, which requires that they destroy the gang leader (played by Kiefer Sutherland).

Possibly My Best Friend Is A Vampire? It came out in 1987, involves kids, has a dream sequence with a "shower scene" with (shower, not window) curtains... can't remember if there was a model of the town in it or not though.

There was this series I saw as a teenager. It was a Canadian-German TV series from the mid-1980's originally called 'Der Kleine Vampir', and is about a 'normal' boy who meets a vampire boy of apparent similar age: 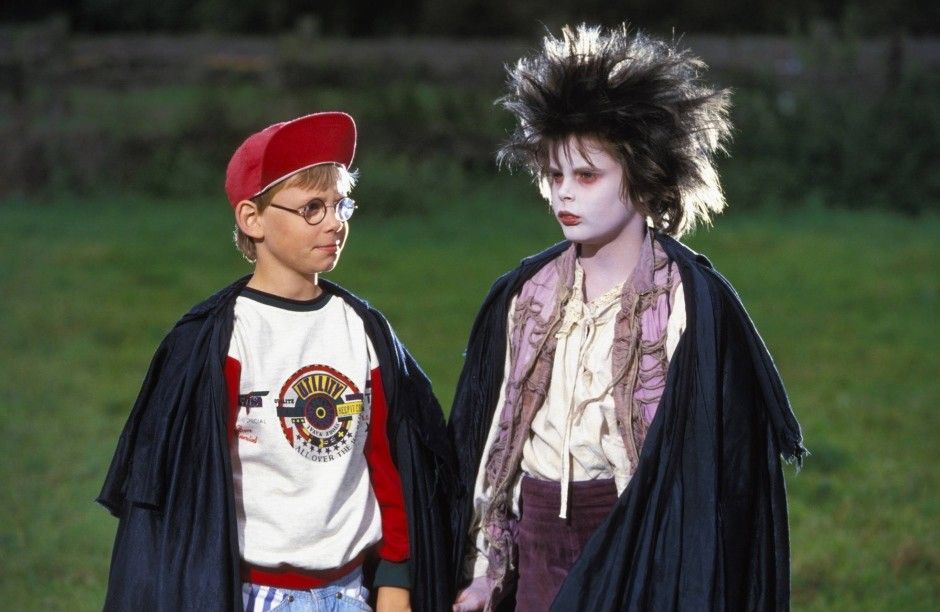 I vaguely remember the intro featuring curtains, possibly when the vampire boy flew in through the window.
Reading through the plot, it seems they regularly visit a crypt, which well might have featured metal bars or cells, and, as they have to face a vampire hunter, it seems - and I remember it - to be quite exhilarating, possibly a smidgen disconcerting.

Since comments can be deleted, I'll go ahead and answer Beetlejuice (1988), which is a comedy, but could seem scary to a very young child.

Adam (Alec Baldwin) and Barbara (Geena Davis) live in an old house in New England. In the attic, Adam has made a detailed scale model of the town and their house. Adam and Barbara die in a car accident and a new family moves into their house. But Adam and Barbara's ghosts don't want the new family in their house, so they try to scare them away. They call upon a ghost-for-hire named Beetlejuice (say his name three times to invoke him), played by Michael Keaton in white face paint, Joker-like hair, and black-and-white striped pajamas that look like an old-fashioned movie prison uniform. The new family isn't scared by Beetlejuice, though, and wants to make money off their "haunted house."

While trying to scare away the new inhabitants of their house, Adam and Barbara dress up like ghosts, and when that doesn't work, Barbara appears holding a bloody knife and Adam's severed head.

At one point, Adam and Barbara visit an underground Hell-lite that has an office receptionist and a waiting room whose inhabitants look like they've been waiting there for decades. It's not prison bars, but some aspects may look prison-like. Combined with the striped pajamas, this might put "prison" into your head.

One of the most memorable scenes occurs at the dinner table. The new family and their real estate agent (I think) are dining at a long rectangular table. The appetizer is shrimp cocktail. Suddenly the Banana Boat Song ("Day-O! Day-ay-ay-O!" and "Come Mr. Tally-man, tally me bananas...") bursts out, the shrimp cocktail turns into hands that cling Alien-like to the new family's faces, and the other dishes and furniture come to life. The new family are possessed and made to dance in silly ways.

You don't say exactly how old you were, but I could see the movie being scary to a preschool aged child.

Some images from IMDB: 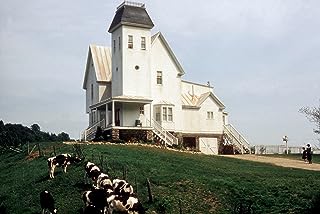 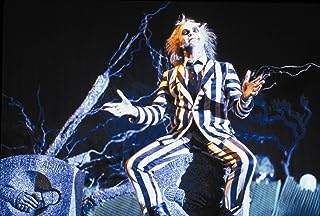 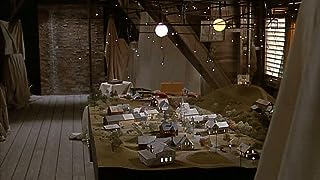 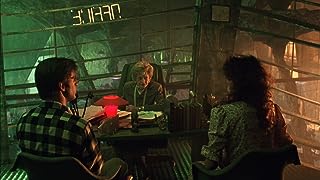 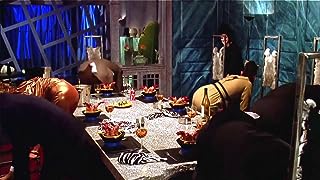 Not the answer you're looking for? Browse other questions tagged story-identification movie vampire or ask your own question.