This may sound a strange premise for a science fiction story, but maybe it has a resonance for some of the physics educators who contribute to this site. At a meeting this morning, one of my colleagues remembered a short story dealing with a professor doing some dull demonstrations in an electricity and magnetism course (presumably at university level). In the course of the demonstration he found that aligning the coils in a certain configuration produced the image of an alien performing an "exotic dance", much to the delight of the students in the class.

It is a short story, just a few pages. He read it in an anthology from the 1960s or earlier, and it's quite probable that Pictures Don't Lie by Katherine MacLean also appeared in it. This appears in quite a few anthologies though, so it doesn't limit things all that much.

"An Eel by the Tail", a short story by Allen Kim Lang; first published in Imagination, April 1951, available at the Internet Archive; reprinted (along with "Pictures Don't Lie" by Katherine MacLean) in the anthology Invaders of Earth edited by Groff Conklin. 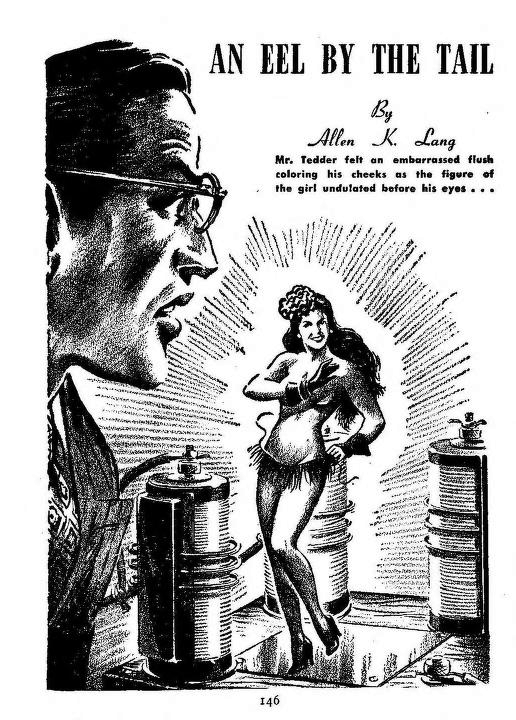 It's a high school physics class in the future, and the teacher is demonstrating a fictional effect which is supposed to make a bar of metal disappear, but the teacher's modified setup causes an alien to appear in its place. She's not really an "alien stripper" but a telepathic alien shapeshifter taking the form of a human stripper from the mind of one of the students:

Ned Norcross, who was taking Junior Physics II for the third time, had his mind on neither the Ziegler Effect nor the tragic results of last night's basketball game. He was slumped at his desk, dreamily rehearsing the topography of one Honey LaRue, a strip teaser who nightly practiced her art at the Club Innuendo. Norcross pried himself up on one elbow to glance toward the clock above the demonstration bench, then slumped forward. on his desk in a faint. Up on the marble top of the demonstration bench, pulling off a right silk glove in time to the lazy ripple of a snare-drum, danced Honey LaRue.

1
Alien Rock found and contains a mind controlling alien being
16
Trying to identify a short story about a Man who becomes a genius due to a US government lab experiment
7
Man stranded on alien planet, dies alone, alien creatures under water
6
Short story: dripping tap summons up ghosts
5
1960’s sci-fi film black and white: lab in the woods with alien/monstrous woman being experimented on
6
Short story in which a microbiologist is prophesied to have a lab accident
8
Research lab punches hole through space into vacuum