Who first called it the "space jockey"?

In the movie Alien (1979), there is an alien creature that appears to be growing out of a chair that sits in a large chamber. Over the years, it has become known as the "space jockey". Where did that name originate?

It was a term used by the production crew, and was subsequently adopted by fans of the movie, even though the name itself isn't used anywhere in the movie, nor in the script.

Topps release a series of Alien trading cards in 1979, a few of which also refer to the Space Jockey: 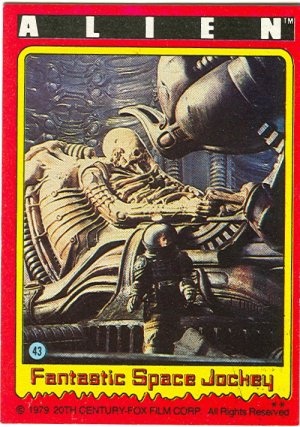 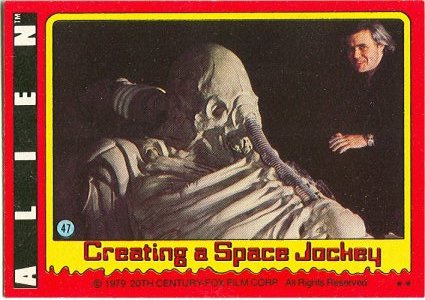 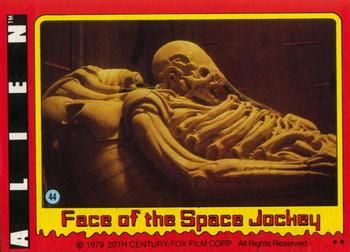 This entry from a blog about the alien series says that it arose from a line in a script rewrite by Giler and Hill in which the corpse would have been human, and Dallas casually referred to the body as a "dead space jockey" (see the comment on the OP by AcePL about the history of 'jockey' to refer to aircraft pilots), and the film crew continued to use the term after it was changed back to an alien pilot and the line was no longer in the script:

When David Giler and Walter Hill began to rewrite O’Bannon’s script, the alien pilot was removed – along with every other extraterrestrial element. In their initial versions of the film, the titular Alien was a product of The Company’s bioweapons division, with the spore housed in an off-world facility known as The Cylinder. The extraterrestrial pilot was rewritten as a downed human pilot that the Nostromo crew find dead within his vehicle, a ship recognised by Dallas as a “L-52.”

“Suddenly, Lambert lets out a grunt of shock. Her light has illuminated a skeletal shape. Seated twenty feet beyond them in the control chair. A human being, terribly disfigured.”

Director Ridley Scott claims to not know the origins of the term “Space Jockey” in relation to the gargantuan carcass found within the derelict. “Who is the big guy in the chair, who was fondly after Alien called the Space Jockey?” Scott said at a Prometheus press event in April 2012. “I don’t know how the hell he got that name.” The term has its earliest origins in this iteration of Giler and Hill’s rewrites, where Dallas refers to the dead human as:

Dallas: “One dead space jockey, no sign of the other crew members, the old L-52’s generally went up with a compliment of seven…”

The term is a spin on desk jockey, which is defined as “an office worker who sits at a desk, often as contrasted with someone who does more important or active work.” Since the filmmakers were trying to evoke the feeling that space travel was unglamourous, maybe even boring, the name makes sense in terms of human space pilots, and isn’t hard to fit the alien jockey either. The name also has a precedent in a 1947 Robert Heinlein story, titled, of course, Space Jockey, which is about “a rocket pilot who pilots a commercial passenger spacecraft”. The Shepperton crew, who were given copies of the Alien scripts to read prior to production, seem to have been responsible for making the name stick after its excision from one of the drafts.

There are more details on this script draft on this entry from the "Alien Explorations" blog. This entry quotes Ron Shusett, who helped come up with the original story with Dan O'Bannon (O'Bannon then wrote the original screenplay), talking on the "Mr. KERN" show--the link is dead but I found it on archive.org here, scroll down to Oct. 27 2012 and right-click on "Hour 1 Part 1" to download it. Around 4 minutes in he's talking about how after Fox agreed to do the movie they brought in Giler and Hill to do some rewrites, and he goes on to talk about changes they made that he and O'Bannon didn't like, at about 5:20 he says:

They wanted the, where they found the eggs, in that weird thing that looks like inside a whale's body, where the space jockey was, they wanted that to be an army bunker for some reason. I guess they just, "okay this will give it realism", and that's boring, you can't, you know, once you're committed to that, you can't go back to a steel, you know, twentieth century army bunker. That goes backwards in imagination. Whereas that Giger design, which he hand painted, airbrushed that whole wall himself personally, like he did his artwork, and that's why it looks so eerie, and and the creature inside it too, the crew called Space Jockey. So that was one thing they wanted realism, and then they said, okay--Ridley said, "no no, they can't replace things with realism like that"

The book Ridley Scott: A Biography by Vincent LoBrutto claims on the (unnumbered) google books preview page here that H. R. Giger coined the name, but there's no endnote to tell us where LoBrutto got this piece of information, and we don't know how well he would have researched incidental facts like this.

But in a comment, Clara Diaz Sanchez posted this article from io9 which proves that the name was coined during production, since it includes this image from the storyboard: 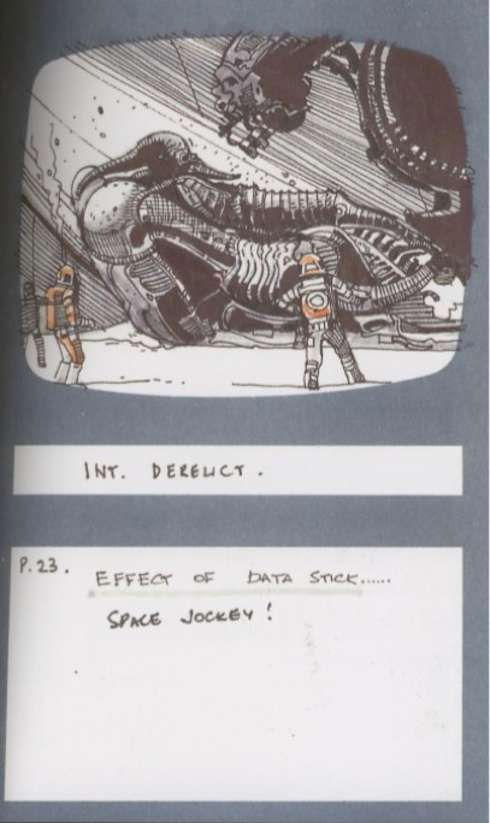 It may have been coined by a fan of the late Robert Heinlein, who wrote a short story of that title - included in The Green Hills of Earth. Heinlein’s space jockey was human, not alien, but he was a pilot, and something growing out of a chair may have suggested a pilot's seat.

17
Is the ship the crew of the Nostromo find, the same "Engineer" ship that crashed in Prometheus?
19
Why did the Science Officer not get chosen for the mission to the alien spacecraft?
11
Why is Nostromo's technology so 1980s?
27
Why did the crew of Nostromo not seem too surprised by new Alien life?
39
Does Alien actually pass the Bechdel test?
6
Is the Alien hypersleep chamber used for anything else?
33
How smart is the original Ridley Scott Xenomorph really?
9
What is the difference between the Xenomorph in "Alien: Covenant" and the ones in "Alien vs Predator"?
9
How is it that the alien grows to full size in like 5 minutes in Alien Covenant?