Ask Question
Asked 2 months ago
Active 2 months ago
Viewed 98 times
6
This question already has an answer here:
Book about mages who can harvest magical energy from the environment (1 answer)
Closed 2 months ago.

I remember reading a while ago a series (I think it was a trilogy) about someone born without magic in a world where magic is the norm. I think there was a prophesy that the one without magic would destroy the world or something, so the priests send him into exile and it turns out there are a number of people in exile who have started building machines to combat magic.

Other than that, I remember very little, but I think the protagonist comes into possession of a sword that destroys magic and they also play tarot regularly.

This is almost certainly the Darksword Trilogy, by Margaret Weiss and Tracy Hickman (of Dragonlance fame).

The overall story follows Joram, who is the heir to an empire, but is born "dead", without magical power in a empire where magic is life.

From wiki, the description of Joram:

The son of the Emperor and Empress of Merilon, and heir to the throne, Joram was born completely Dead (devoid of magical power) in a society where magic is considered life. He is left to die but a distraught woman named Anja finds him and takes him to replace her own stillborn child. Anja teaches Joram sleight-of-hand tricks and non-magical illusions to conceal the fact that he has no magic of his own. Joram's lack of magical ability is discovered and he flees to the Outland while Anja dies trying to protect him. In the wilds of the Outland, Joram joins the outlawed Technologists who are practicing the long-forbidden Mystery of Death, Technology.

There he plans to forge the Darksword, a blade capable of absorbing magic. However, his plans are delayed because forging such a sword requires a Catalyst (special magicians that have little personal magic but are necessary to enhance the magic powers of all the others). Saryon is sent by Bishop Vanya, ostensibly to capture Joram. The two are opposed to the tyranny displayed by Blachloch, and Joram convinces Saryon to help him forge the Darksword. Then, together with Simkin and Mosiah, they leave the village for Merilon so Joram can claim his heritage.

Joram and Gwendolyn live "Beyond" - the technological Planet Earth - for ten years (but only one year in Thimhallan time), and Gwendolyn goes mad. Joram meets Menju, a mage from Thimhallan. Simkin changed into a copy of the Darksword and placed by Joram on Merlyn's tomb. Merlyn's spirit was awakened and transported mankind and the Magic to a new world, so men could make a new start.

With this, Joram fulfilled the prophecy: He was born Dead and lived, died by Smythe's poison and resurrected by Simkin, and held his hand into the destruction of the world (by the Hch'nyv) or its salvation (by awakening Merlin who saved mankind).

The series starts with Forging the Darksword from 1987, and covers Jorams efforts to bring back the outlawed Technology to take the place of magic.. 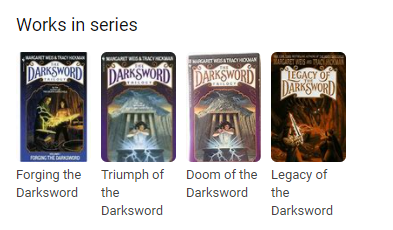 3
YA novel with a rediscovery of healing magic?
10
Fantasy story about magic council on alternative Earth
13
A story where technology is forbidden, but used by priests
26
Books about dragons and war from a cat-loving author
10
Finding a book about a camp where Magic can be manufactured with technology
14
Book about a magic blacksmith
17
Fantasy series a boy who finds a magic ring which allows him to find other rings
5
Fantasy paperback about a man sent from Earth to a fantasy world, involved a special cloak and some transliteration of “Woodchuck”