Collection of dystopian short stories: people eat a dog, detective hunts and kills kids, world where everyone is dumb

It’s a compilation of short stories that all take place in the future. I read it in 2016 & I can’t for the life of me remember it. It’s written in English.

One of the stories was about these kids who find a dog, capture it & then after much debate, eat it. They have these worms or something in their stomachs that let them eat anything so they didn’t have to eat the dog but they did.

Another story was about this shot that everyone gets to stop them from aging. As a result kids are illegal. There is a detective whose job is to kill these kids for population control, he’s the main character in this story.

The story I remember the most was about this guy who works at a sewer plant I think. The story starts with him and his girlfriend at their apartment, she almost blows up the whole place because the oven is on with the gas & she has a lighter super close. He wakes up to this & shoves her out of the way(Everyone is kinda dumb in this story) She was trying to make him bacon. After being upset she tells him that she’s going with her friends to swim in the river, he tells her not to because the water is nasty, she ends up going anyways and when she comes back she tells him that her friend came out with a rash or warts I don’t remember.

She wants to have kids but in this world sometimes you get kids that are mutated & that stops him from trying. Anyways His boss is this lady who has a mustache & yells all the time. One of his coworkers is bald and has a scratching problem with his head. One day all the lights at the sewer plant go all red & this guy is trying to figure out what’s wrong. The phone number that he finds is old & out of service. He goes to a library to find out what to do only to find the library locked. He manages to get in and there’s an old lady who speaks with him.

Having looked a bit further, I think this is Paolo Bacigalupi's 2008 collection Pump Six and Other Stories.

The first story you mention is almost undoubtedly "The People of Sand and Slag" wherein a trio of security guards who can live on any matter inexplicably find a dog one day, in an environment where no living thing should be. One of them initially tries to keep it as a pet, but buying actual food for it is too expensive and in the end they roast and eat it.

The second story is "Pop Squad" for which I found this description:

In an not so utopian future, immortality has become a fact and natural death virtually eliminated. The tradeoff is that population control is strictly and violently enforced. If no one is dying, no one can be born. Our main character is a member of the “Pop Squad” that hunts down and “deals with” renegade women who illegally procreate.

That would make your third story the title story "Pump Six", where intelligence is dropping, and nobody knows how to repair the artifacts of civilization produced earlier. I found this description in a review:

The story focuses on Travis Alvarez, a maintenance man who helps keep the sewage pumps going in a future New York City. Because of ever-present pollution, the intelligence of the city's residents has plummeted to incredible lows. Even Alvarez himself is not an intelligent man, being at best average by today's terms. However, he has enough knowledge and concern left to know it is vitally important that the city's ancient sewage pumps keep running, or else a toxic mess will kill millions. But most New Yorkers don't see what harm can come from a few backed up toilets. Even his girlfriend, who almost blows up their apartment searching for a gas leak with a lit match, tells Alvarez not to take his job so seriously. Why worry about things like sewage pumps when there are so many parties and drugs to be had?

Here's another set of descriptions from most of the stories in the collection. 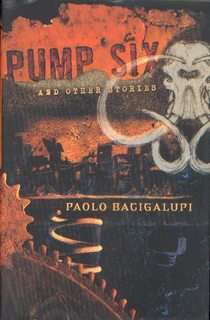 10
Short Story about a boy and a dog, where all animals can talk
8
Story about a flying mushroom, a lady, an octopus, a tortoise, and a dog
9
Book of horror stories based on Native American folklore
10
Hansel and Gretel as told from the (good) witch's perspective
5
Webtoon where the world is full of demons, and the MC takes refuge in a bunker where he meets other kids and a professor