Book series about a kid who lives in Chicago and goes to a school for “special” children, where they can have pets (one is a talking rabbit)

My friend is trying to find this book series that is kind of like Harry Potter, and involves a kid who lives in Chicago and goes to a school for “special” children. He goes by train. At the school they can have pets. She told me it involves a talking rabbit and the main character’s crush had a toad or something. There was a black girl who was intelligent and liked the main character, but the MC didn’t feel the same.

The school held students from the ages of 12-17, and some other characters included an Irish boy named Conner and an Italian girl named Lisa.

I was also told that the cover has a red/orange color scheme that involves the MC (although she doesn’t know if it’s the first or second book).

I was trying to help, but I couldn’t find it and now I’m curious as well.

This is The Tapestry series of books, by Henry H. Neff, starting with The Hound of Rowan.

[A] twelve-year-old boy named Max McDaniels who comes across a strange Celtic tapestry one day in a secret room in a museum. Max finds a letter in his coat pocket afterwards that leads him to Rowan Academy, a secret school where other gifted students like him go.

The book has a young boy coming to a magical academy by train. Characters include Connor and Lucia, a young black Italian girl. As pointed out in a comment, "There's a big scene in the first book where students are assigned magical animals to take care of. One of the students (not Max) is assigned a talking rabbit. The rabbit sticks around through the series but we don't see much of his student." 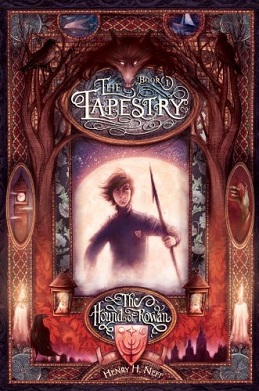 8
Looking for young adult series about a kid who escapes earth and goes starship racing
8
Book about boy who suddenly attains powers, goes to school for kids with powers
3
Fantasy Book with color coded districts and underground school
10
Animated show with character who has a stone that summons creatures
15
60s book involving Occam's Razor, and part of Ireland being closed off from the world under alien influence
4
Anime in which 4 school children go into a game and rescue the world; they meet a pink-haired girl inside the game who helps them
8
Book about a society that used runes to harness elemental magic, which they learned about in schools