Whats the manga name, possibly reincarnated as a prince with water attribute

So I can't remember if it was someone that was reincarnated but I think they had memories of a past life. They were born as a prince. When they had their status checked at birth, he saw E+S for water, but everyone else saw SS (so he will be the lord/ in charge of a water territory later on?). Eventually one of the elder princes, I think it was the crown prince, visited and had him hold a sword called Leviathan. Apparently there was a good risk of the MC dying because people felt very weak when near it/holding it. Eventually he gains full control over it and gets Water SSS. I think there were only 3-7 chapters out so far (around February). 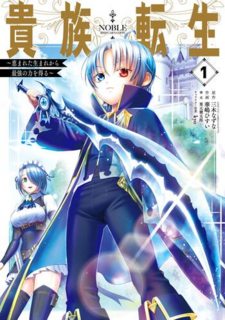 Born as the Thirteenth Prince, Noah was originally in a position removed from the imperial succession, so he freely passed his time in the fief granted to him. However, the Crown Prince died before the Emperor. The imperial succession would be fairly contested among the remaining princes. Noah, being the strongest despite living freely, overwhelmed the other princes and eventually became the Emperor with the most power in the world.

Found with a search for isekai manga "sword leviathan", which brought up excerpts from the novel.

“The name of that sword is Leviathan.”

“It’s also known as the Magic Sword of Water. It’s said to be the highest level among the magic swords, and about 120 people died before they could handle it for the first time.”

“Exactly. Noah has water SS, right? It’s a Demon Sword that even the S guys would handle with their lives cut short, but I was wondering what would happen with the water SS.”

Not the answer you're looking for? Browse other questions tagged story-identification manga isekai reincarnation sword-and-sorcery or ask your own question.