Looking for manga about reincarnated boy, abandoned by parents for lack of skills, and becomes a young adventurer named Larucu

I'm looking for a manga and just can't remember the name of it. It's about a boy who was killed in his (today's modern) world but he wasn't supposed to die, but another "evil" god intervened in his life.

God sends him to another world to reincarnate with some abilities as an apology. He ends up reincarnating as a kid, like a 6-10 year old boy. The evil god had interfered again, making it so he arrived in the body after his parents had abandoned him for not having any skills show up at the ceremony kids go through that shows that.

He ends up going to the adventurer's guild and becoming an adventurer, befriending a middle-aged who works there who has a scar on his face and so most people don't approach him. Larucu (what the boy calls himself) learns magic and ends up becoming friends with a lot of high-positioned people, like the king. I don't think this series was finished yet.

I don't know if it's a perfect match, but this sounds similar to Shoki Skill Ga Benri Sugite Isekai Seikatsu ga Tanoshisugiru!; ("The Initial Skill Is Too Convenient and Life in the Otherworld Is Too Fun!") from the description:

High-schooler Shinomiya Raku was reincarnated due to a wicked god toying with his fate, which ended in his untimely death in the previous world. Reborn as Larucu, a silver-haired boy, he possesses super convenient skills he received as an apology for his death, and is now filled with great hope to lead a fulfilling, smooth-sailing second life.

However, he was soon struck by a series of catastrophic events, starting by getting expelled from his family and then collapsing down the road. But through his intrinsic honesty and versatile initial skills, he manages to overcome his unfortunate circumstances and becomes the adventurer he's dreamed of being and enjoys his new life to the fullest! 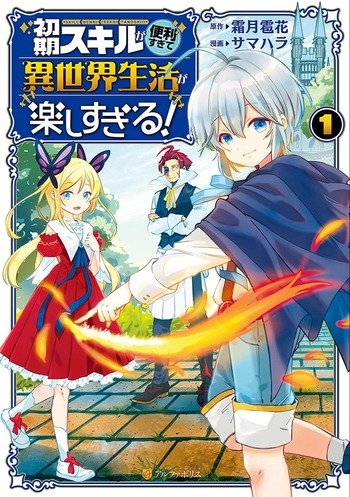 The comic page on mangakakalot says that the last update was in February and the series is ongoing with chapters 7 and 8 expected soon.

Not the answer you're looking for? Browse other questions tagged story-identification manga reincarnation or ask your own question.

15
Story about a dragon hatching and a bullied protagonist
5
Looking For an Early 2000s Young Adult Book Involving a Human Boy Raised by Aliens
4
Manga where a ghost on a rooftop can't move on until he finds out an art student loved him back
7
Manga where a teenage boy absorbs others' wounds
2
Manga about a boy with abusive parents who is reincarnated in an isekai world
5
Isekai manga where a guy gets reincarnated as a nobleman's son and invents Othello
2
Looking for a manga, about boy who strictly follows family rules
5
Manga where a reincarnated(?) young boy has a maid and a wolf girl who he does business with