I read this in a paperback in 1969 or 1970. The underground world was lit by some glowing fungus. The fungus might also have been sort of hallucinatory, and there was a bit of a druggy feel to things, although perhaps I am only remembering the times.

Any building big enough to have a sub-basement generally had an entrance way to the realm.

I think this book is probably "The Shadow People" by Margaret St. Clair 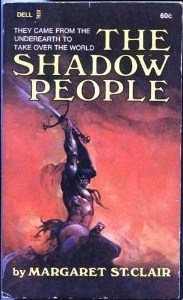 It was published in 1969, which precisely matches the date OP remembers reading it.

Any building big enough to have a sub-basement generally had an entrance way to the realm.

An extract from this article supports this:

In the The Shadow People, the protagonist makes his way underground via a series of basements and sub-basements following the apparent path his girlfriend’s captors have taken. After hours of moving across the city of Berkley, he crosses an underground river that serves as the barrier between the upper world and the one below. Written in 1969, St. Clair is likely using the Campbellian tool of “crossing the threshold” to signal the hero’s descent.

She takes him to the basement of his apartment. They wait, and feel with their faces for a cold breeze and a particular scent. Slowly he becomes aware of it. They follow it.

He finds a black gap just behind the buildings pipes, just large enough for someone to slide through side-on.

He enters another basement. Then finds the breeze again. Another strange gap. he keeps going.

And keeps going. Another basement, a forgotten crawl space, an old industrial space, a warehouse. He climbs. More. Another space. All different, never a clear path, only just accessible. He travels for a day.

He crosses the city, passing through junk yards, back lots, empty sheds. It is this long circuitous path that leads him to the Under-World.

It also mentions a hallucinogenic fungus, although it's a foodstuff and not a means of lighting:

We discover stuff about the Under-People. They live on trash and this barley infected with this strange fungus. The fungus is a hallucinogen, so everyone underground is on a constant, eternal drugs loop where they are imagining themselves to be animals (usually), then coming down and feeling utter despair.

This discussion describes the book as

a spooky story about scary basement spaces ... Our world, but the secret underworld just out of sight?

It also backs up OP's recollection of the book seeming trippy:

more in terms of just creating a sense of weirdness. Of psychedelia. This is definitely a book that reads like a paranoid fever dream, and it relates to that whole old-school gaming concept of the dungeon as "mythic underworld." In this case, it's not just the underground that's full of crazy things that don’t make sense — it spills over into the "real world," but in such an extreme way that it calls into question everything we think we know.

5
Children's book about a girl maybe being influenced by her black cat to become a witch
8
West Coast tribal warfare with a dollop of aliens on the side
13
SF novel about one-way scientific expedition to inhabited planet, where telepathic aliens "talk" sort of ++like this++ and ~*~this~*~
24
Short story with brother-sister conjoined twins as protagonists?
7
Space adventure cartoon with underground caverns and collapse
5
Weird west book involving a man (tinker?) traveling in a wagon . Either he or his brother are a werewolf. They're connected by an amulet
14
Anthology of stories beginning with the protagonist checking into the suicide clinic
7
Comic Book Identification - many eyed floating alien monsters in underground caverns in the desert