Has Superman ever turned against humanity and been stopped?

Superman is one of the most powerful DC characters. If he ever tried to harm humanity (with full strength), he would be very hard to stop. Are there any records of Superman turning against humanity and successfully being stopped (also, how was he stopped)?

In the film Superman III, Superman turns selfish under the influence of imitation Kryptonite. This causes him to commit acts of petty vandalism, such as righting the Leaning Tower of Pisa and blowing out the Olympic Flame.

Later, after having been seduced by the antagonist's girlfriend, he punches a hole in a supertanker, causing an oil spill. This is in aid of the antagonist's plot to control all oil, which could count as "turning against humanity".

After having gone on a bender, he splits into Clark Kent and "dark Superman" in a junkyard, who then proceed to battle.

Clark Kent overcomes dark Superman and returns to his good self.

In the Legion of Super-Heroes “Great Darkness Saga,” Darkseid creates a “reverse-DNA clone” of Superman (as well as several other of the most powerful beings in history).

He is able to handle the time-traveling Superboy and Supergirl, but is permanently depowered when Element Lad transmutes the ground on which he stands to gold kryptonite (after creating a lead shell to protect Superboy). The story also had three billion mind-controlled aliens with all the powers of Superman fighting for Darkseid.

Unlike many of the other examples, this was in the main continuity and resulted in the evil Superman being permanently defeated, not freed of mind-control.

Another classic story that might qualify is the “Cyborg Superman,”from the “Death of Superman” storyline.

He was the disembodied spirit of supervillain Hank Henshaw, impersonating Superman, but his body was another sort-of clone—and the comics hid this from the reader until after it revealed that the other three characters trying to become the new Superman were not the real deal.

The real Superman, once he decided to stop being dead, teamed up with Green Lantern and several other heroes, finally destroying the Cyborg Superman’s body by vibrating it to smithereens. Henshaw’s spirit survived to fight both Superman and Green Lantern again. In later appearances before the “New 52” reboot, he had grown weary of his undead existence and was only looking for someone with the power to finally kill him—which he taunted Superman for not having been able to do. Superman claimed he had never really tried.

Most recently, Captain Luthor from the current Superman and Lois TV show is from another universe where Superman became power-mad (possibly related to Lois Lane marrying Luthor instead). It has not yet been revealed how Luthor defeated the evil Superman, but his world was destroyed.

Superman is seen going on a destructive rampage, gloating about the power he wields in his hands. Cyborg of the Teen Titans tries to confront Superman but loses some cybernetic limbs in the process. He manages to call Changeling and Wonder Girl for help. They arrive, but Superman easily handles them. 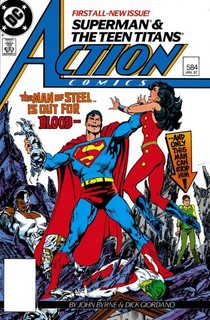 TWO
In relation with @notovny's great answer, let me extract a quote from his provided link

There are strong similarities between this episode and "Superman: The Dark Side", an Elseworlds story that has the baby Kal-El's spacecraft being diverted to Apokolips instead of Earth, by Metron. There, Darkseid raises the Kryptonian as his son, and orders him to lead an invasion of Earth when he discovers the Anti-Life Equation hidden there. In particular, Superman's battle armor in this episode is markedly similar to his Apokoliptian battle suit in the comic. 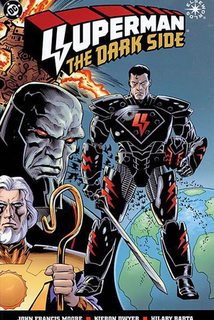 THREE
I think that both apokoliptian stories are in the debt with the Legends cross-over published in Superman's series in 1987 - by Byrne, Giordano, Wolfman et al - where Superman was brainwashed by Darkseid too. 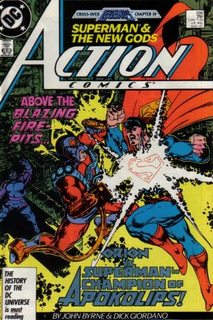 Also there are multiple evil versions of Superman across the multiverses, one of them is Superboy-Prime from Earth-Prime that has appeared in a bunch of issues being my favourite Final Crisis: Legion of 3 Worlds by Geoff Johns (writer), George Pérez (penciler) and Scott Koblish (inker). 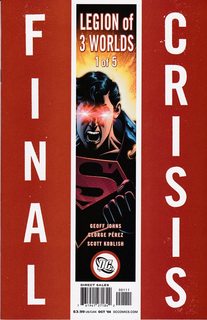 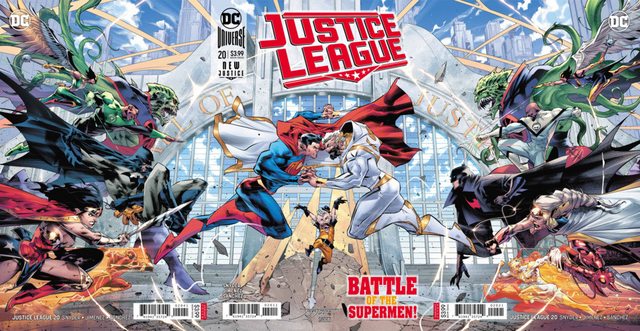 And you can find another version of Superman vs. the Justice League in 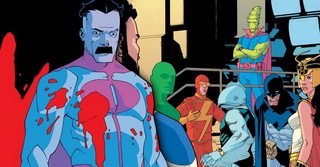 It has happened a few times in the DC Animated Universe. Presented below are two cases of Brainwashing/Mind Control, and two cases of alternate-universe Supermen.

An accident at STAR Labs sends Lois Lane to an alternate universe where Superman, distraught over the death of that universe's Lois Lane, teams up with Lex Luthor to turn Metropolis into a police state. Upon talking to the prime-universe Lois Lane , confessing his love, and learning that the Alternate-Universe Lex Luthor decided to kill her, he turns on Luthor, and decides to release control of Metropolis.

In the series finale, Superman is captured by Darkseid's forces and brainwashed by Granny Goodness into believing he is a loyal son of Darkseid, sent to forth to bring order to the universe. Darkseid sends Superman to Earth at the head of an Apokaliptan army,. During an attack on a military base where Superman defeats Supergirl, Lois Lane (who the brainwashed Superman has been having flashes of memory about) persuades him to remember his true memories shortly before he is incapacitated by a Kryptonite rocket built by Lex Luthor.

It is revealed that Starro has been controlling Superman for years after having been recovered by Superman back in the Superman episode "The Main Man" Plotting to release a host of its spawn into the oceans of Earth, Starro's plans are thwarted by The Justice League Unlimited and Batman (Terry McGinnis) who uses an electrified grapple to disrupt Starro's control of Superman.

In an alternate-universe, Superman storms the White House with the rest of the Justice League to stop an insane President Lex Luthor, who has murdered the Flash, and is on the verge of starting a nuclear war. This Superman decides to end their rivalry permanently, and subsequently, the alternate Justice league assumes full control over their Earth. Upon discovery of the prime DCA Universe two years later, the Justice Lords decide to bring their band of order to it by capturing and replacing their prime-universe counterparts.

The scheme is thwarted when the captured Jusice Leaugers escape, recruit the alternate-universe Batman and return to the prime Universe. As part of a deal to secure a presidential pardon, primary-universe Lex Luthor builds a power-disruptor device that strips the Justice Lords of their powers so they can be returned to their own universe to stand trial. 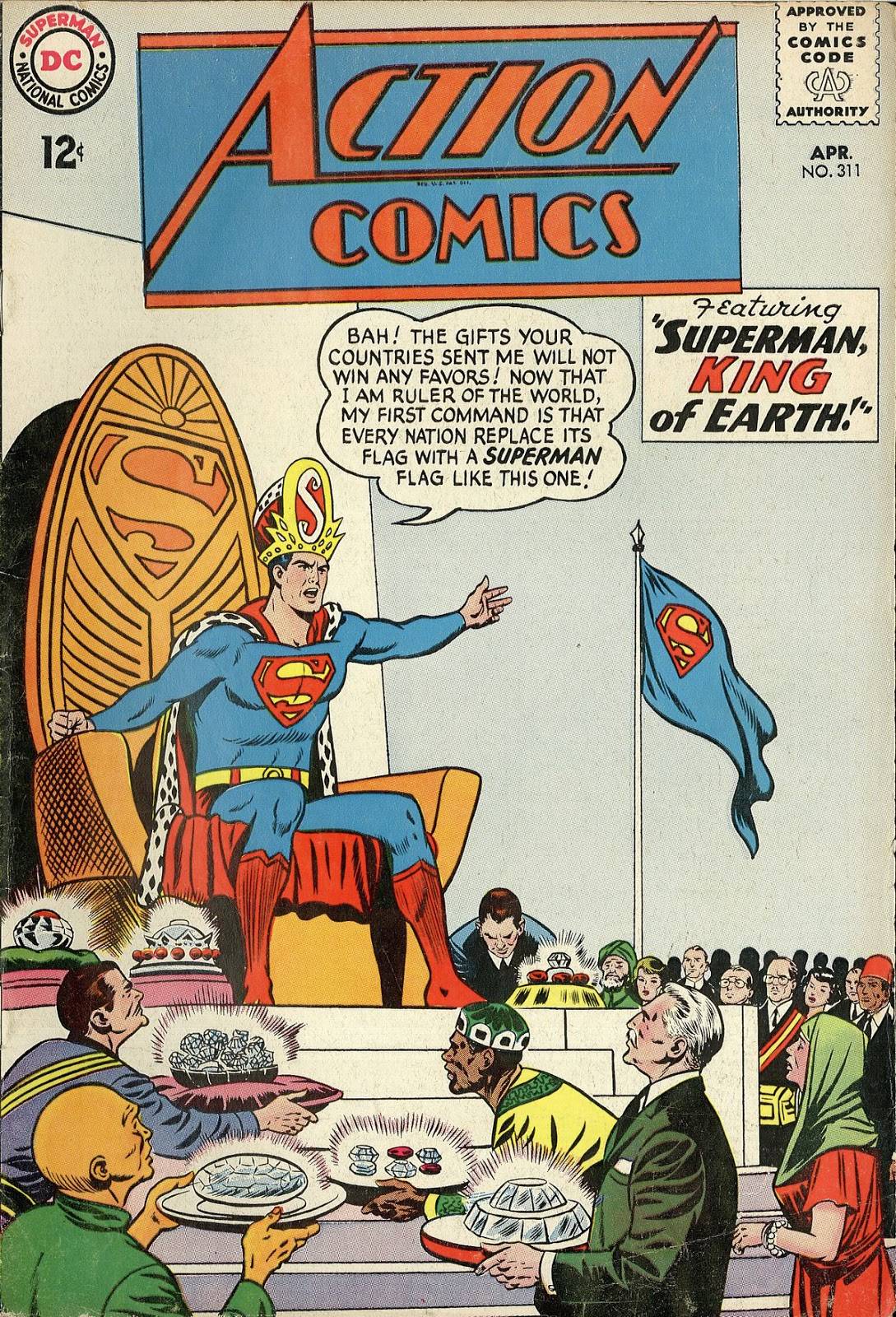 It's a red krytonite tale where Superman and Clark Kent are split into separate beings. By all actions and appearances, Superman has become a ruthless megalomaniac (he is even referred to once as "His Satanic Majesty"). The mortal Clark Kent tries every ruse he can conceive to lead a Superman-Resistance Underground.

In Action Comics #312, Clark has even converted himself to a Metallo robot form, complete with kryptonite heart to battle the tyrant. The climactic reveal, as Superman falls to the kryptonite, is that Superman was working a convoluted gambit to save Earth from a incredibly potent alien attack. He had to be 100% convincingly evil to buy some time.

It was a chilling story for a kid. Not any "Imaginary Tale". The red kryptonite split was a needless misdirection, but not a complete deal-breaker.

In Wonder Woman (Volume 2) #219 (September 2005), Superman has been brainwashed into believing Wonder Woman is an enemy who has killed Lois Lane. She is able to overcome him for long enough to stop the villain who is mind-controlling him. 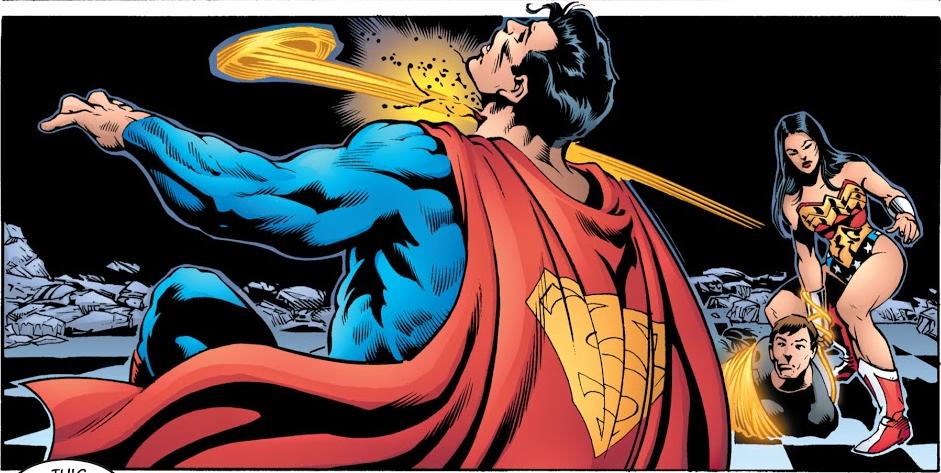 Injustice : Gods Among Us comics series where Superman turns evil. He doesn't exactly turn against the humanity, but becomes an evil dictator.

Joker and Harley kidnap Lois Lane and hook a nuclear bomb trigger into her heartbeat. They then trick Superman into thinking that Lois is Doomsday using Kryptonite laced fear gas. Superman kills Lois under that impression, which stops her heartbeat, setting off a nuclear bomb that destroys Metropolis. After coming to senses and learning what he has done, Superman kills Joker, and then declares himself as the new World Leader, and stops all wars. He eventually turns into an evil dictator, killing many superheroes and commoners under the objective of 'World Peace'.

In Justice League: War movie, Superman went rogue, but not by choice.

In Batman: The Brave & the Bold, Superman became tyrant after coming under the influence of red kryptonite.

In the end of Zack Snyder's Justice League (2021), it was shown that Superman had gone evil and Batman had to team up with villains to counter Superman.

In Red Son, Superman orders an invasion of the United States and is resisted by Batmen among others. The book has also been turned in to an animated film. I thought this was the inspiration for a scene in the Justice League movie, but I was unable to find a source to backup my theory.

17
How powerful is Superman typically, vs ultimately?
15
Have Lex Luthor and the Riddler ever tested their intellects against each other?
11
Has Batman ever been the dictator?
4
Did Superman ever regain his memories of his Legion adventures with Supergirl?
4
Is Superman more powerful than the Greek gods?
8
Even with his powers, doesn't Superman train and work out?
4
Who has been shown to be greater in power, Mister Mxyzptlk or Darkseid?