I haven't caught up on the DC movies, but I'm fairly certain that Diana isn't established to be bisexual in them (although I could be wrong). But I've heard people talking about how she's canonically bisexual in the comics. Is this accurate? Is this referring to a certain comic version of her?

In relation to Wonder Woman: Year One, then yes, it's absolutely confirmed that Diana has had multiple lesbian relationships in the past. She also engages in a sexual relationship with Steve Trevor. 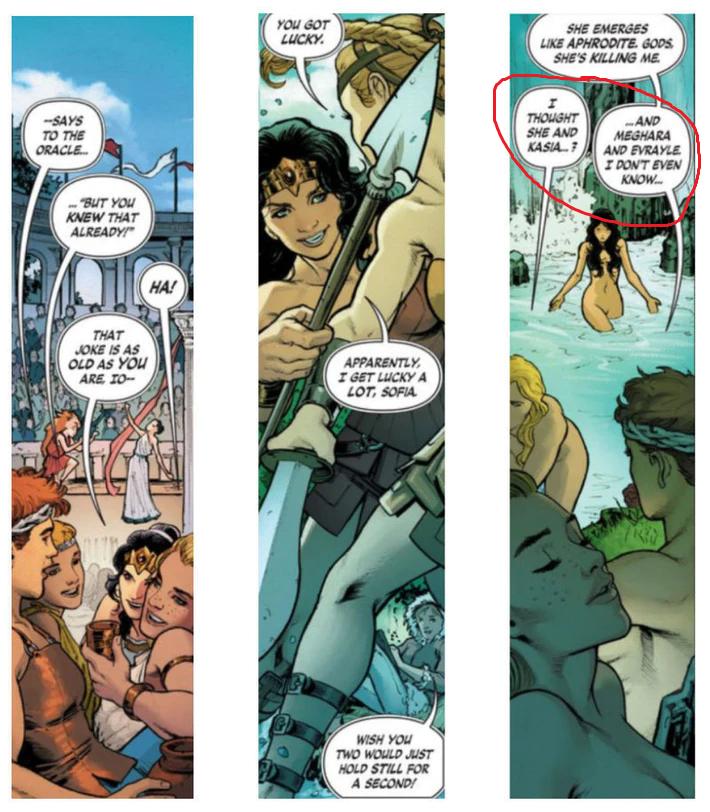 Matt Santori: I’m going to start off simple and to the point. The Wonder Woman that you and Nicola have introduced to us in “Year One” — is she queer?

Greg Rucka: How are we defining “queer?” You’re applying a term specifically and talking to an ostensibly cis male (and white to boot), so “queer” to me may not be the same as it is to an out gay man. So, tell me what queer is.

MSG: Fair enough. For the purposes of this conversation, I would define “queer” as involving, although not necessarily exclusively, romantic and/or sexual interest toward persons of the same gender. It’s not the full definition, but it’s the part I’m narrowing in on here.

17
Does Lois Lane Know Who Superman Is (In Any Versions or Reboots)?
6
In what movie and for what reason did Superman's throat "inflate"?
27
Does Wonder Woman Age?
1
Are Aqualad's powers inspired by waterbending?
31
Does Wonder Woman need to use her bracers?
2
In DC (Flash), is there any comic version of Iris West Allen which isn't Caucasian?
15
Why does Superman love Lois Lane?
6
What really happened to Batman at the end of The Killing Joke?
5
Is Wonder Woman invincible?