An illustrated book of short science fiction stories I read as a kid in the late 80s, early 90s

I’ve been searching for a book of science fiction short stories, with black and white illustrations interspersed throughout. I can’t be sure of the publication date, though I read it in the late 80s, early 90s. I can recall to some degree two of the stories;

One was about a young boy who terrorized his parents with psychic/telekinetic powers. I remember the illustration was of a close up of the boy’s face as he looked up at a bird and killed it with his mind. The bird may have been depicted as falling from the sky, the kid’s face suggested he took pleasure in this act. It is possible that the story is “It’s a Good Life”, but I wasn’t able to trace it back to the book I’ve been searching for.

Another story, the details of which I remember more vaguely, involved an astronaut who crashes on an alien planet who gradually de-evolves into a primitive alien (possibly a primate-like creature). It may have been written in diary form, as I can recall that the journal entries became less intelligible as the astronaut succumbed to his transformation.

I want to say that this was a collection of stories by various authors, but it may very well have been the work of one person.

I focused on the second story are more likely to be able to be found--and I'd heard of a similar story at least. A bit of searching turned up "The Trouble with Paradise" by Alan A. Grant. Using the Internet Speculative Fiction Database, ISFDB, I checked to see which anthologies it had been in.

It turns out to have been the first story in Exciting Stories of Fantasy and the Future, with an unknown editor and interior illustrations by Oliver Frey 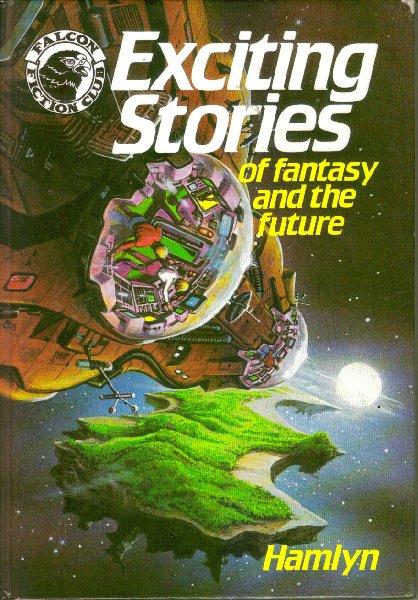 Not the answer you're looking for? Browse other questions tagged story-identification books anthology-book illustrated-story or ask your own question.