I read part of this book in the 1980s, so it is at least that old. The story was based on 13 WWII black Sherman tanks abandoned in a field somewhere that had their hatches welded shut (and I believe they had a crucifix on the hatch as well). Years after the war, people open the hatches and find the inside empty except for a cloth sack. Then things started to happen...

I put the book down then and never finished it but for some reason it popped into my head recently and I was wondering what the title was. Another aspect of the book that I recall was that incantations (to summon a demon) were authentic and the author in the preface strongly discouraged the reader from reading them out loud.

At the bridge of Le Vey in July 1944, thirteen black tanks smashed through the German lines in an unstoppable, all-destroying fury ride. Leaving hundreds of Hitler’s soldiers horribly dead.

Thirty-five years later, Dan McCook visited that area of Normandy on an investigation of the battle site. There he found a rusting tank by the roadside that was perfectly sealed, upon its turret a protective crucifix. Sceptical, he dared open it, releasing upon himself and the innocents who had helped him an unimaginable horror that led back to that black day in 1944. And re-opened the ages-old physical battle between the world and Evil Incarnate...

I found a review that quotes the warning you were mentioning:

All the devils and demons that appear in this book are legendary creatures of hell, and there is substantial recorded evidence for their existence. For that reason, it is probably inadvisable to attempt to conjure up any of them by repeating out loud the summons used in the text, which are also genuine. I would like to point out that the Pentagon and the British Ministry of Defense strenuously deny the events described here, but I leave it to you to draw your own conclusions. – from the Author’s Note

There are a lot more quotes and details at the linked review; I'm positive it's the book you're looking for. 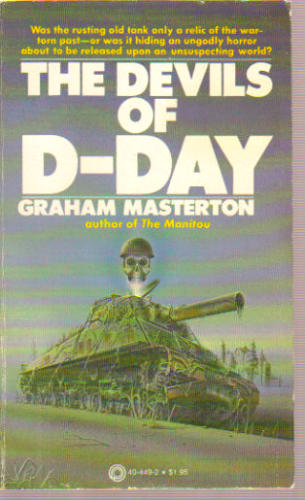 Not the answer you're looking for? Browse other questions tagged story-identification books demons or ask your own question.

7
People are possessed by heroes or demons, gaining supernatural powers
9
1970s: Student creates complex program, forgets about it, and it becomes intelligent and finds him years later
22
Demons are summoned by doing math
9
Post apocalyptic alien commune, released within the past 10 years, with low budget
18
Science fiction book where teleportation happens, two years later
6
Post-apocalyptic sci-fi book about a family that goes into cryogenic chambers in a cave to wake up hundreds of years later
3
Show Identification: Every time the man sleeps he wakes up years later
4
Book with a plant that released its seeds every couple of years that corrode everything they touch
12
Science-fiction short story ending with the line “Twenty years later, it didn't seem so funny.”