Anime with a girl stuck on top of a huge mech that was walking towards a city; she had to disable (or enable) a bomb by remembering a phrase

When I was a child in the early 2000s, I remember watching what I believed to be an anime. I can only remember vague details, however I remember the style being that of the '90s, and it being set in a futuristic landscape.

A major scene was a girl stuck on top of a huge mech that was walking towards a city; she had to disable (or enable) a bomb by remembering a phrase.

There were a few other scenes with scientists being killed, and it seemed like there were human-sized (humanoid?) robots / humans wearing exoskeletons with jet packs. That's literally all I remember, but I have been searching for this for years.

That may be the 2004 adaptation of Masamume Shirow's Appleseed manga (namely, a mashup of volumes 1 and 2, with a different core story). Shinji Aramaki, the designer of Bubblegum Crisis, directs, which is why the movie has several "Aramakisms" in particular "Knight Saber" like characters that need to be put down at one point but which are not otherwise justified.

Here is the trailer for the anime:

At some point the utopian city Olympus' main management computer decides that Humans Are the Real Problem and directs the defense gun platforms to clean up. I'm no longer sure why this decision was taken. In the manga, it was something like the inability of humans to adapt to complex conditions, in the anime there was a plot involving the military.

Here is a gun platform from the manga laying waste, with the mayhem being surveyed by Prime Minister Athena Areios. The gun platform looks like a kind of Robo-Tarantula. In the original story, there is a connector buried in an emergency control room, which one has to reach and to disable, which Deunan does with her old dad's Colt 1911 and excellent coordination. 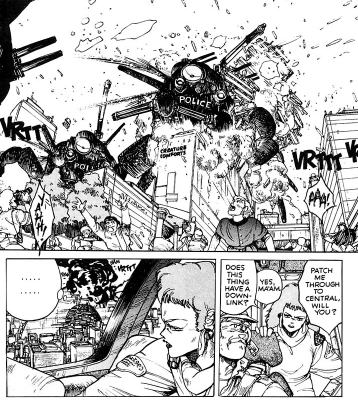 From Appleseed Volume 2: The Prometheus Unbound: Civilians flee from a couple of flight-capable rogue Police gun platforms alighting on buildings

To avert catastrophe, recently recruited ESWAT member Deunan Knute, a young lady of ... 18 (?) just has a few seconds to press the correct button, secured by a passcode, while holding on to one of those platforms for dear life.

ESWAT people are equipped with exoskeletons, which are able to fly in the anime (using a turbine if I remember correctly). In the manga we get exoskeletons equipped with antigravity lifting devices from volume 4 onwards: 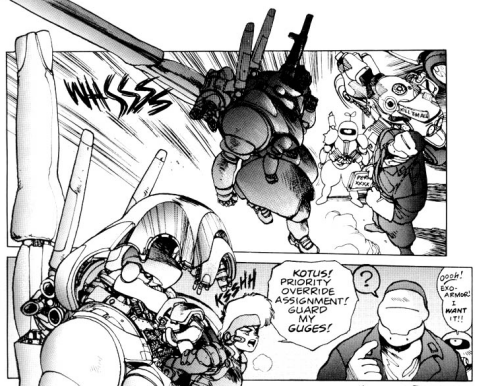 From Appleseed Volume 4: The Promethean Balance: Deunan arrives in her flight-capable brand-new ESWAT gear and hands it for safekeeping to "KOTUS", an experimental AI and sometimes terrorist-masher, currently reassigned to writing traffic tickets (because even in Olympus, there is a limit on police brutality).

11
Webcomic following a boy who's inhabited by a vengeful ghost who's after the men who killed her
19
Old SF novel about a white-haired young woman, alien or half-alien, who tutors human kids
7
Mutated beetles cartoons (characters made of rope and rings)