Movie about a man eventually being electromagnetically attached to a woman?

Peace and blessings. I have been looking for this film for years but I cannot exactly remember the plot (or name). It was a movie that came out around the 80s or 90s where at the end of the film a man/teenager became magnetically attached to a woman/teenager (who as very dorky/geeky looking). They are standing in a crowd and it is revealed to the man/teenager that he will be attached to this woman for the rest of his life. He looks at her (in disbelief) while she was extremely happy. As they begin to latch on to one another, the picture freezes (classic freeze-frame ending lol) and he is heard crying/moaning as the end credits begin to come on. Does anybody have an idea what film this could be?

Sounds like an episode of Steven Spielberg's Amazing Stories, in particular Season 1 Episode 2 'The Main Attraction'

From the Wikipedia synopsis

A high school jock (Scott Clough) up for Prom King and feeling too cool for a girl (Lisa Jane Persky) develops a "magnetic" personality following a meteor shower. 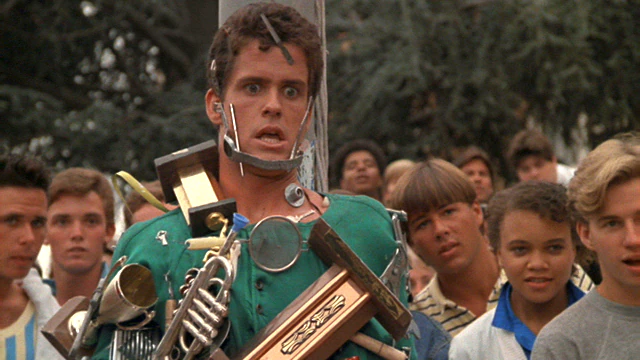 4
80's movie about a man who finds a robotic arm which eventually turns him into a cyborg?
6
Movie with hero being the son of a demon woman and a templar knight?
11
Movie where a man transforms into a woman in space
4
A movie where a man dreams he's a woman living an alternate life
13
Movie about a man with a hologram girlfriend
13
Story about the 10 commandments being shattered and eventually reconstructed
29
Movie about man who is teleported to Mars?