I remember it started off by him running away from becoming king but an elf girl was chasing him and telling him to come back. The two are still really young. The elf girl catches up to him and brings him back. When the prince was still a child he and his father went out to the country and while seeing the villagers trying to collect wheat he said that using a large fork would make it easier to collect it.

This is Heroic Chronicles of the Three Continents.

Possessing memories of being born, raised and died in a country called Japan… the young boy Hercule was born in the imperial household of a declining empire. This empire that once was a super power that reigned over the world… is now a country nearing it’s end. ... Using the knowledge from his previous life, Hercule struggles to rebuild the empire… reforming the tax system, revolutionizing the industry, reorganizing the public finances, rebuilding the administration and reforming the military system.

The wheat scene occurs early on. He suggests they use a comb (which is the same basic idea as a fork). 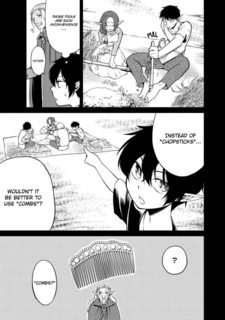 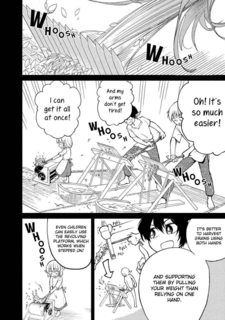 The very opening is the protagonist running away while being pursued by a girl. He's trying to run away from inheriting the rulership of a dying empire, and initially expected he wouldn't need too, as he was only the third prince. But the other two were useless.