I'm searching for a novel very similar to Eric Flint's Time Spike. Pretty sure it was published 5–10 years ago.

A platoon? of US solders and their vehicles (APCs and Hummers) [like 12 people, and 5 vehicles] on duty in the Middle East are displaced back in time.

In addition, they discover that there are also a large group of Spanish Inquisitors (or Conquistadores?) with their horses and a Roman Legion who have also been carried back with them. (And I believe a larger? group of even more primitive people (from 1000 BC?) were also dragged back.)

I believe they figure out they must have been transported back to about 20,000 BC?

They try to survive and keep the peace between the 3 groups and the inhabitants of the land that exist at the time they arrive.

I'm pretty sure it was not part of Eric Flint's Assiti Shards series.

story-identification time-travel
Share
Improve this question
edited May 7 at 9:26

A Long Time Until Now, by Michael Z. Williamson. First published in 2015. I bought the paperback edition when it was released the following year. Here's the cover art that was used on the copy I own. 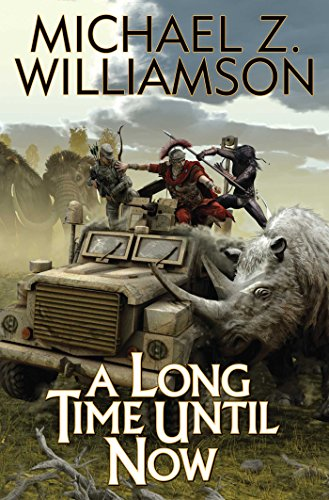 The plot is much as you describe. A handful of U.S. servicemen and servicewomen (not all from the U.S. Army) are driving a few vehicles down a road in Afghanistan when they suddenly end up many thousands of years in the past. They pick a hill and turn it into a fortified position (it helps that the only commissioned officer among them is an engineer), and manage to make friends with a local Stone Age tribe. As I recall, there was no suggestion that this primitive tribe was, itself, displaced in time from a later century, however.

Unlike some stories that start out with similar premises, these Americans make no effort to conquer their neighbors and start forming a mighty empire with themselves at the top, nor do they even try to start teaching the local human tribes all about gunpowder and printing presses and other technological breakthroughs in the hopes of completely rewriting the history of human civilization and getting the Industrial Revolution started far ahead of its original timetable. No, since there are only ten of these Americans, they find it necessary to stay focused on basic matters of survival. ("What will we do to get enough calories each day after our rations run out?" "How will we keep from freezing to death in winter weather?" "How many man-hours of labor will it take to fortify our new home until it is impervious to stampeding animals?" Etc.)

Later on, they discover that somehow a detachment of Roman legionaries, from the heyday of the old Roman Empire, has ended up living some miles away. (Note that one of those Romans seems to be featured in the center of the action in the cover art.) The American lieutenant feeds the legionaries a line of bull about how he's a high-ranking "tribune" in the Imperial Roman Army of their distant future (i.e. almost two millennia after the era these soldiers come from). This does not persuade those Roman soldiers to place themselves under his orders (and the lieutenant never expected that to happen), but it does help to persuade the Romans to treat him as an "equal" and not keep trying to kill or enslave him and his own soldiers, so that feels like a solid win from his point of view.

In other words, after some friction at first, the two groups manage to establish some rules for peaceful co-existence. While remaining in their separate camps, miles apart, of course -- they don't trust each other enough to be willing to merge into one unit.

I don't recall any Spanish conquistadores in this story, though. They wouldn't be likely to appear, because the basic assumption that Williamson was working on was that a temporal anomaly had caused some people to abruptly move back in time, while staying in the same geographical location where they already were. I don't believe the Spanish conquistadores of a few centuries ago ever made any effort to invade Afghanistan? So they wouldn't be likely to get caught up in the middle of a phenomenon that was, as you remembered, very similar in its practical effects to Eric Flint's "time spike."

In the end, there's a happy ending for the American characters. Some time travelers from a mysterious future, where the time travel technology was first developed (and I believe was accidentally responsible for these other people getting lost in time), arrive in Stone Age Afghanistan, manage to make friends with the stranded Americans, and eventually return them to their native era (several months after they had gone "missing in action" in Afghanistan). They are extensively debriefed by psychologists working for the U.S. Army, which is probably what the futuristic time travelers had expected to happen, and thus explains why those people were so very mysterious about what's going to happen to the human race in the next few centuries of recorded history -- not wanting to "undo" their own history by giving us clues on how to prevent certain crucial events, you know?

You can look at the first few chapters of the text if you follow this link to the book's Amazon listing. Click on the cover art over on the left-hand side of the page, and you'll be started. I expect the text will look very familiar.

11
Pre-70s time travel novel: man dies, wakes up in the future in another body, and repeats the process until medical science has progressed very far
3
Looking for name of a YA sci-fi novel about VR
5
Can't remember fantasy novel with magic and technology mixed, search for elemental shards/crystals
10
Story set in the Middle East involving demons, sorcery, and someone implied to be Gilgamesh
37
Animation movie (80's-90's) with brain-sucking insects
5
Pre-2000s novel about tourism through time travel
7
A book about stopping time