Why is "Use the term 'bro-code'" accounted for a negative score in The Good Place?

In season 1 of The Good Place, during the welcoming session for the newcomers to the Good Place which is hosted by Michael, a set of actions during their lives on Earth and their scores are displayed on a virtual screen.

The ones with a total positive score are selected for the Good Place. Good deeds are rewarded with positive points while bad deeds/sins are punished with negative points.

Among the sins are Use the term 'Bro-Code' and Tell a woman to 'smile', with scores of -8.20 and -53.83 respectively. Why are they categorized as sins?

The points system was discussed in considerable detail in the show and in interviews that accompanied it. Chidi would be happy to note that the outcomes and points are based on a strictly Utilitarian outcome, where things that cause happiness are given positive scores and things that result in net unhappiness are given negative scores. Notably, this can mean that the same action can result in wildly differing scores depending on the outcome over time.

Evidently using the term "bro-code" and telling a woman to smile are things that are likely to result in net unhappiness. As to why, it's likely because the people who wrote the show think that the people who do these things are using sexist tropes that negatively impact on individuals or society in general.

In the original pilot script, the system was explained in even more depth. Point totals were based not just on the inherent benevolence or malevolence of the act, but how it ultimately impacted other people. And they weren’t static. “Let’s say you read a magazine and you see an ad for something and you’re in a doctor’s office and you tear out the ad and you toss the magazine back on the bench,” says Schur. “Maybe the thing you tore out the ad for is a kind of medicine that could help your allergies, right? So you get plus two points for that because you’re trying to help yourself have a healthier life, but negative one point for ripping out a page out of something that wasn’t yours. Someone who suffers from allergies comes along and they’re flipping through that magazine, and if they had seen that ad, they might have done it. Also, their whole family suffers from allergies, so they could have used that ad to buy medicine for their whole family. Suddenly what was one fixed negative point at the moment you did it now is negative 13. The idea is the point values are constantly changing and shifting, depending on the kind of ultimate ripple of whatever you did and how it ripples through the rest of society.”

Schur initially planned to have Michael walk newcomers through various scenarios in the orientation video instead of displaying the graphic. “He said, ‘Save a child from getting hit by a car. Great job. That’s plus 4,000 points,'” recalls Schur. “And you actually saw that happen. And then he said, ‘Poison a river with dirty chemicals. Uh-oh, that’s negative 9,610.’ And then he said, ‘But it’s not just the big stuff.’ He went through that argument and laid that out. But it just took too long, so we came up with this idea of having those things appear on the screen as a much clearer and ultimately funnier way. It explains the premise. Once we had that idea, there were a ton of jokes.”

Good ones, too. For example: Eating vegan earns you +425.94 points, but never discussing your veganism unprompted earns you a whopping +9875.37. “If you just eat vegan, that’s just a personal thing that you’re doing,” reasons Schur. “That’s just a choice that you’re making about the kind of food you want and where it’s sustainably sourced. But the reason we decided that never discussing your veganism unprompted was way better is because people who proselytize about personal choices are often the most annoying people. The people who tell other people, ‘I do this and it’s great that I do this and everybody should do this,’ and if you don’t do this, the implication is you are a bad person, you get far more negative points for that kind of negative action than you do doing something that is an internal choice: ‘This is the way I’m going to live my life.’ And a lot of the ways that we calculated the points had to do with the concept of rippling out. Imposing your value system on someone else is a worse thing to do than just doing something that’s like, ‘I’m pretty good.’ It’s pretty good that you’re vegan, it’s good for the environment and you’re not killing animals, so that’s good in the long-term. But the worse crime than eating meat would be lecturing on other people on why what you do is better than what they do.

The Good Place: Inside the point system that determines your afterlife status 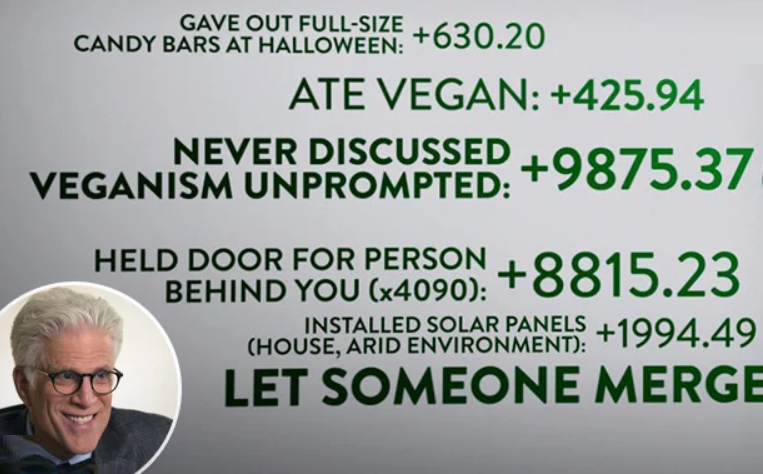 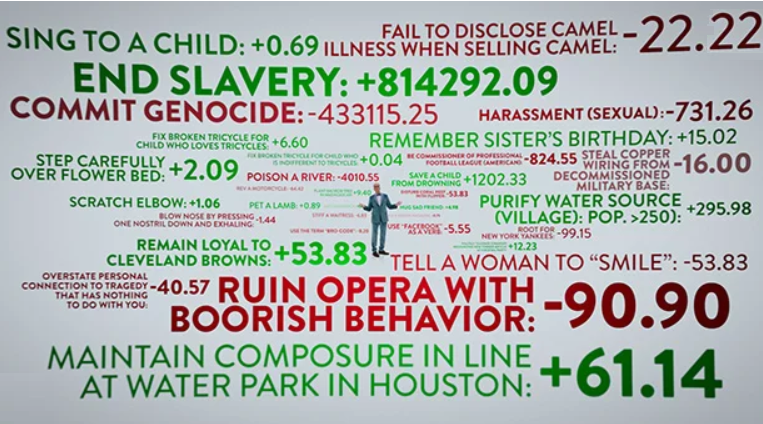 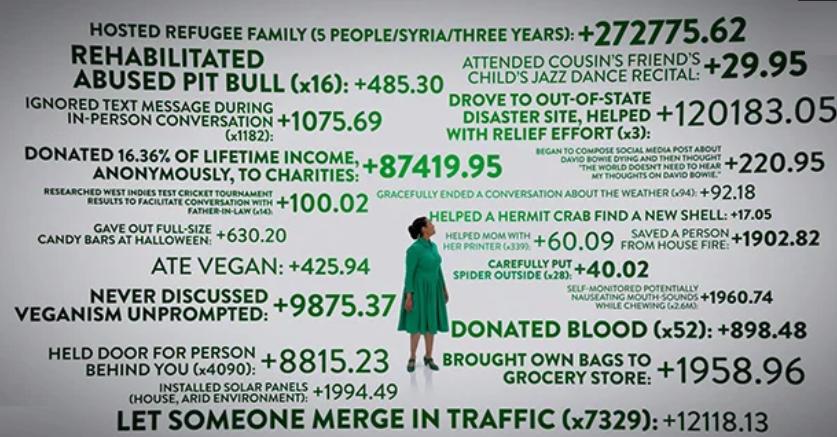 The "bro code" in all of it's forms is incredibly misogynistic. Usually it exists in one of two versions. First the "bros before hoes" version that treats relationships with male friends as always more important than those with women, while "slut shaming" and objectifying them with the use of the word hoes. The other and older version is the opposite, and puts the pursuit of women above friendships with other men, and that your male friends should understand this. It also objectifies women as a prize to be gone after and won.

9
Why does one get points eating a sandwich?

9
How long was the main quartet in the "Good Place?"
9
What is the "time-knife" referenced in "The Good Place" episode "Chidi Sees the Time-Knife"?
7
In The Good Place, how long in Earth years is one Jeremy Bearimy?