Post-apocalyptic novel called “After the Burning”(?)

I'm trying to locate a novel I read in the 1960s in paperback.

I believe the original title was (I think) After the Burning. The major theme was the collapse of human society and the hatred of science.

It was wonderfully well-written with irony and adventure - what you'd get if Heinlein wrote with Clarke's precision.

Book two of the Sword of the Spirits trilogy was titled Beyond the Burning Lands. Though it was published in 1971, at this remove that's pretty close to the 60s.

It meets your description of collapse of human society and the hatred of science:

a post-apocalyptic future where, due to a worldwide ecological catastrophe, life has reverted to a militaristic, medieval setting of walled cities and perpetual warfare.... There are signs of the past existence of the modern world in the ruins of great cities and "high roads" which dot the harsh landscape, but the Seers have made the technology of the "ancients" anathema, and anyone dabbling in "Science" is immediately put to death. 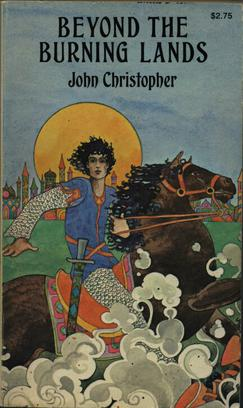 21
What is the title of a book that is set in the future, but there is no electricity?
13
A story where technology is forbidden, but used by priests
6
YA Fantasy featuring a giant blob and a warrior
5
80s/90s Post-apocalyptic novel, medieval with a “great fire” and a “mystic / shaman”
3
Trilogy of books set in the future with “knights”, “priests”, and dwarfs and a rebellion
3
Looking for a book series from the 1960's - NOT the Tripod series

4
Trying to find an old space opera book set on a planet called Coventry (not the Heinlein story)
6
1950s/60s sci-fi novel about the Mohorovic Discontinuity (Project Moho)
8
Seeking a novel with the post-apocalyptic remains of the European powers fighting on the Isle of Man
9
Children's novel about a boy's encounter with an alien called “The Ancient” aboard a ship
18
1960s sci-fi novella with a character who is treated as invisible by being ignored
15
60s novel: bionic man exploring changed world post collapse for super computer
8
90s biopunk novel about near future genetic engineering
4
Help identifying a SF novel about an alien world where the people worship death
15
Sci-fi adventure novel set in the Yucatan, and based on the myth of Quetzalcoatl and aliens