It was a medieval fantasy setting; in the story, a girl lives with her family on a farm. She meets a boy and they play together every day. One day a stranger on a horse rides up to the girl and wants to take her as his ward and teach her to be a mage.

The story skips ahead a couple years and it turns out the stranger is planning something bad and the girl and ghost boy try to stop him.

The girl was white, had black hair, and was on the cover of the book with ghost boy. I remember reading it some time between 2010-2011.

The Valley of the Wolves (2000) by Laura Gallego García, the first book in the Chronicles of the Tower series. 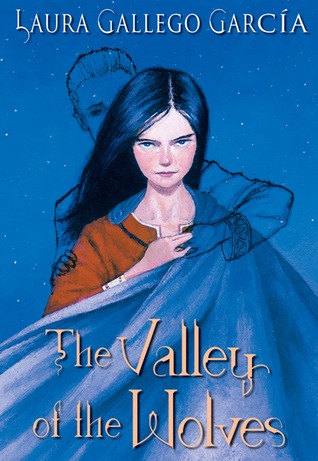 It was published prior to the date you said you read the book in question. The cover has a girl with black hair and a ghostly boy, as you described. And according to this review, the girl grew up on a farm, with a boy only she could see as a friend, until a mysterious magician showed up one day to take her away and make her his apprentice.

Dana is born on a dark and stormy night, when fierce winds pelt her tiny farmhouse, and the midwife sees sparks in her sapphire eyes. She grows up with only one friend, Kai, whom no one else can see—except a mysterious stranger, who arrives in Dana’s drought-plagued village and buys her from her loving parents. Dana becomes a magician’s apprentice in a remote tower surrounded by vicious wolves. Ambitious, Dana absorbs herself in her education, spending less and less time with Kai. If their friendship suffers a little, isn’t that a fair price to pay for gaining a magician’s golden tunic?

Dana’s coming-of-age quest is somewhat intriguing, but she herself is unfortunately flat. Like the similarly stock characters who people this world, she is a collection of traits rather than a character: born with power; budding sexuality; forced to choose between loyalty and ambition. Nonetheless, though shallow as a novel, Dana’s story makes a sweet fairytale.

Not the answer you're looking for? Browse other questions tagged story-identification books magic ghost or ask your own question.

4
Anime with floating house, fliers and conscripted teen boy
7
TV Series - A girl living in a hotel has a ghost friend that only she can see
12
Movie with elfin characters, a girl having a vision, and an adventurer boy
3
Book where girl plays a video game, when she dies her blood bubbles and dissolves her!
4
Fantasy book about a hunter girl with powers, who encounters other hunters (and their animals), a portal, and a vampire