I'm looking for help identifying a science fiction book that I read about 20 years ago - to do with space piracy.

A young man is kidnapped on his world and forced into being part of a pirate crew on a space ship.

Details I can remember: -

The book started with a rather graphic torture scene - but I cannot remember how that fits in with the rest of the story.

I do remember that the cover showed a barrel shaped space ship with sails depicting a skull and crossbones.

story-identification books
Share
Improve this question
edited May 4 at 5:44

I haven't got around to read this book yet, but from what I know of it, this is almost certainly the one you're looking for. It has a boy kidnapped by pirates, opens with a torture scene, and the space pirate ship has sails. 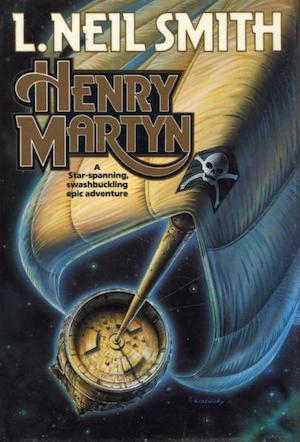 From a review on Tor.com:

The book opens as a young Henry Martyn is tortured into revealing everything he knows about his home planet, and then tortured to death for the entertainment of an unnamed evil villain

The discovery of something called §-physics has transformed industry and technology, permitting spaceships to neutralize inertia, enclose themselves in a breathable atmosphere, and spread sails made out of §-fields to catch the tachyon winds and move faster than light. Fighting is done using thrustibles on a personal level and projectibles between ships, weapons that both create a concussive force for attack, and a protective field for defense.

But after [the protagonist] distinguishes himself in battle with a corsair, going overboard to sabotage the enemy vessel, the captain leaves him drifting in space.

6
Name this children's sci fi show from my childhood
9
Children's Science Fiction Novel: girl from future visits ancient humans, boy believes she is a magical spirit
10
Sci-fi novel with humans and alien hive enemy stranded on planet together after space battle
10
SF book from the 80's or 90's about a Space Cop who is made into a slave with a pain/pleasure implant?
14
Book series: Minerals crashing into the sun, emigrating cult, and frozen man
4
Space piloting through layers of space, pirates and implants
15
A Movie with Repopulation of Earth in Far Future